Over the last few decades, motor imagery has attracted the attention of researchers as a prototypical example of ‘embodied cognition’ and also as a basis for neuro-rehabilitation and brain–machine interfaces. The current definition of motor imagery is widely accepted, but it is important to note that various abilities rather than a single cognitive entity are dealt with under a single term. Here, motor imagery has been characterized based on four factors:

Sorting out these factors characterizing motor imagery may explain some discrepancies and variability in the findings from previous studies and will help to optimize a study design in accordance with the purpose of each study in the future. 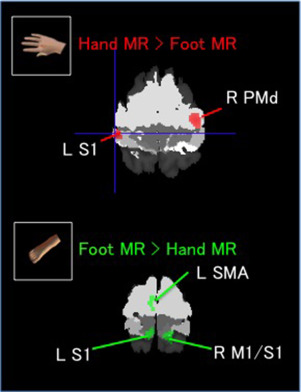 Somatotopically arranged brain activity during mental rotation (MR) of hands and feet (Hanakawa et al., 2007). Activity greater for the foot MR than for the hand MR (green) is situated dorsal to activity greater for the hand MR than for the foot MR (red). This arrangement agrees with the motor somatotopy of the motor and somatosensory areas where the foot representations are situated dorsal to the hand representations. Primary motor cortex (M1), primary somatosensory cortex (S1), dorsal premotor cortex (PMd), supplementary motor cortex (SMA).

This entry was posted on November 26, 2015, 21:33 and is filed under Uncategorized. You can follow any responses to this entry through RSS 2.0. You can leave a response, or trackback from your own site.