The human hand comprises complex sensorimotor functions that can be impaired by neurological diseases and traumatic injuries. Effective rehabilitation can bring the impaired hand back to a functional state because of the plasticity of the central nervous system to relearn and remodel the lost synapses in the brain. Current rehabilitation therapies focus on strengthening motor skills, such as grasping, employ multiple objects of varying stiffness so that affected persons can experience a wide range of strength training. These devices have limited range of stiffness due to the rigid mechanisms employed in their variable stiffness actuators. This paper presents a novel soft robotic haptic device for neuromuscular rehabilitation of the hand, which is designed to offer adjustable stiffness and can be utilized in both clinical and home settings. The device eliminates the need for multiple objects by employing a pneumatic soft structure made with highly compliant materials that act as the actuator of the haptic interface. It is made with interchangeable sleeves that can be customized to include materials of varying stiffness to increase the upper limit of the stiffness range. The device is fabricated using existing 3D printing technologies, and polymer molding and casting techniques, thus keeping the cost low and throughput high. The haptic interface is linked to either an open-loop system that allows for an increased pressure during usage or closed-loop system that provides pressure regulation in accordance to the stiffness the user specifies. Preliminary evaluation is performed to characterize the effective controllable region of variance in stiffness. It was found that the region of controllable stiffness was between points 3 and 7, where the stiffness appeared to plateau with each increase in pressure. The two control systems are tested to derive relationships between internal pressure, grasping force exertion on the surface, and displacement using multiple probing points on the haptic device. Additional quantitative evaluation is performed with study participants and juxtaposed to a qualitative analysis to ensure adequate perception in compliance variance. The qualitative evaluation showed that greater than 60% of the trials resulted in the correct perception of stiffness in the haptic device.

The human hand is a complex sensorimotor apparatus that consists of many joints, muscles, and sensory receptors. Such complexity allows for skillful and dexterous manual actions in activities of daily living (ADL). When the sensorimotor function of hand is impaired by neurological diseases or traumatic injuries, the quality of life of the affected individual could be severely impacted. For example, stroke is a condition that is broadly defined as a loss in brain function due to necrotic cell death stemming from a sudden loss in blood supply within the cranium (Hankey, 2017). This event can lead to a multitude of repercussions on sensorimotor function, one of which being impaired hand control such as weakened grip strength (Foulkes et al., 1988; Duncan et al., 1994; Nakayama et al., 1994; Jørgensen et al., 1995; Wilkinson et al., 1997; Winstein et al., 2004; Legg et al., 2007). Other potential causes of impaired hand function include cerebral palsy, multiple sclerosis, and amputation. Therefore, effective rehabilitation to help patients regain functional hand control is critically important in clinical practice. It has been shown that recovery of sensory motor function relies on the plasticity of the central nervous system to relearn and remodel the brain (Warraich and Kleim, 2010). Specifically, there are several factors that are known to contribute to neuroplasticity (Kleim and Jones, 2008): specificity, number of repetition, training intensity, time, and salience. However, existing physical therapy of hand is limited by the resource and accessibility, leading to inadequate dosage and lack of patients’ motivation. Robot-assisted hand rehabilitation has recently attracted a lot of attention because robotic devices have the advantage to provide (1) enriched environment to strengthen motivation, (2) increase number of repetition through automated control, and (3) progressive intensity levels that adapts to patient’s need (for review, see Balasubramanian et al., 2010).

Specifically, haptic interfaces and variable stiffness mechanisms are usually incorporated into robotic rehabilitation devices to provide varying difficulties by adjusting force output or stiffness. For example, the LINarm++ is a rehabilitative device that appropriates variable stiffness actuators with multimodal sensors to provide changing resistance in a physical environment in which users performs arm movement (Malosio et al., 2016; Spagnuolo et al., 2017). This device also encompasses a functional electrical stimulation system which has been shown to promote motor recovery in upper limb rehabilitation (Popović and Popović, 2006). The Haptic Knob is a device that trains stroke patients’ grasping movements, and wrist pronation and supination motions by rotating a dial that is able to produce forces and torques up to 50 N and 1.5 Nm, respectively, depending on the patient’s level of impairment (Lambercy et al., 2009). The GripAble is a handheld rehabilitative device that allows the patient to squeeze, lift, and rotate to play a video game with increasing difficulty and gives feedback through vibration in response to the patient’s performance (Mace et al., 2015, 2017). The MIT-MANUS, a planar rehabilitation robot, also has a hand-module that converts rotary motions to linear motions, and in turn allows for controllable impedance in the device (Masia et al., 2006). In addition, pneumatic particle jamming systems have been designed to provide users with haptic feedback by changing the stiffness and geometry of the surface the user presses on with their fingertips (Stanley et al., 2013; Genecov et al., 2014). These devices and systems, however, are either costly and bulky due to complex mechanical design or have limited range of stiffness due to passive mechanical components.

To overcome these limitations, this paper proposes the design of a novel pneumatically actuated soft robotics-based variable stiffness haptic interface to support rehabilitation of sensorimotor function of hands (Figure 1). Soft robotics is a rapidly growing field that utilizes highly compliant materials that are fluidic actuated to effectively adapt to shapes and constraints that traditionally rigid machines are unable to Majidi (2014) and Polygerinos et al. (2017). Several soft-robotics devices have been developed to provide assistance to stroke patients, but none of these has been designed as resistive training devices. An example of an existing device includes the use of soft actuators that bend, twist, and extend through finger-like motions in a rehabilitative exoglove to be worn by stroke patients (Polygerinos et al., 2015a,b; Yap et al., 2017). A variable stiffness device that employs soft-robotics allows a greater range of stiffness to be implemented since there is minimal or no impedance to the initial stiffness of the device. In addition, soft robotics methods allow devices to be manufactured with lowered cost and have much less complexity, thus suitable to be used not only inpatient but also outpatient hand rehabilitative services (Taylor et al., 1996; Godwin et al., 2011). 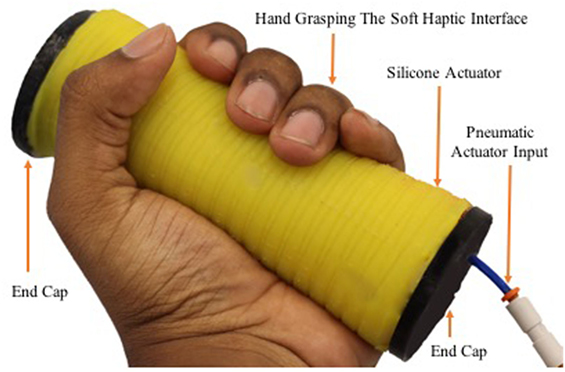 Figure 1. The prototyped soft haptic variable stiffness interface with a hand grasping it.

In Section “Materials and Methods” of this paper, the materials and methods employed in designing and fabricating the soft robotic haptic interface are described, including the design criteria of the prototype. This section also describes the methodology for a stiffness perception test on healthy participant with the proposed device. In addition, the overall closed-loop control system of the device to provide pressure regulation is presented in this section. Section “Results” describes the preliminary results obtained from characterization of the device’s varying stiffness in response to changing pressure inputs, and the subjective evaluation of perceived stiffness obtained from test participants. Finally, Section “Discussion” includes an overall discussion of open question and future research directions.

This entry was posted on December 20, 2017, 22:06 and is filed under Paretic Hand, Rehabilitation robotics. You can follow any responses to this entry through RSS 2.0. You can leave a response, or trackback from your own site.