Functional electrical stimulation is an important therapy technique for dropfoot correction. In order to achieve natural control, the parameter setting of FES should be associated with the activation of the tibialis anterior.

This study recruited nine healthy subjects and investigated the relations of walking speed with the onset timing and duration of tibialis anterior activation. Linear models were built for the walking speed with respect to these two parameters. Based on these models, the speed-adaptive onset timing and duration were applied in FES-assisted walking for nine healthy subjects and ten subjects with dropfoot. The kinematic performance of FES-assisted walking triggered by speed-adaptive stimulation were compared with those triggered by the heel-off event, and no-stimulation walking at different walking speeds.

The improvement in ankle dorsiflexion without worsening ankle plantarflexion in speed-adaptive stimulation condition could be attributed to the appropriate stimulation timing and duration. These results provide evidence that the proposed stimulation system with speed-related parameters is more physiologically appropriate in dropfoot correction, and it may have great potential value in future clinical applications.

About three quarters of stroke survivors experience different levels of brain dysfunction and movement disorder [1], which result in lower living quality and limited ability in social activities [2]. Of these subjects, 20% suffer from impaired motor function in the lower extremities. One of such impairments is dropfoot, which is characterized by poor ankle dorsiflexion during the swing phase and an inability to achieve heel strike at the initial contact [3, 4]. Abnormal gaits such as circumduction gait and abnormal foot clearance on the affected side are often found as a method of compensating for excessive hip abduction and pelvis elevation on the unaffected side [5]. This results in gait asymmetry and slow walking speed [6].

Functional electrical stimulation was a representative intervention to correct dropfoot and Liberson et al. first introduced functional electrical stimulation (FES) to correct dropfoot for chronic hemiplegic subjects in the 1960s [7]. An electrical charge is delivered via a pair of electrodes to activate the tibialis anterior (TA), which results in ankle dorsiflexion. Yan et al. applied two dual-channel stimulators to the quadriceps, hamstring, gastrocnemius, and TA to recover motor function of the lower extremities in an early stage after stroke [8]. The stimulation was followed by a predetermined sequence of muscle activations that mimic a healthy gait cycle [9]. The duration of stimulation was five seconds in Yan et al.’s study. However, subjects with different severities of impairment might have different walking speeds [10], which means that a fixed stimulation duration might not be able to account for different walking patterns.

Liberson et al. used the heel-off event detected by a footswitch to trigger the stimulation [7]. However, the reliability of the footswitch controller was significantly reduced when subjects who dragged their feet during walking encountered a slope or an obstacle [11]. Bhadra et al. proposed a manual switch to trigger stimulation as a walking aid for subjects with spinal cord injury (SCI) [12]. However, manual control may distract subjects from maintaining balance and lead to an increased risk of falls [13, 14]. Furthermore, the cable between the control sensor and stimulator was inconvenient for walking [15].

Instead of a footswitch, Mansfield et al. [16] and Monaghan et al. [17] detected the heel event of the gait cycle in FES-assisted walking using an accelerometer and a uniaxial gyroscope, respectively. The commercially available product WalkAide also uses an accelerometer for this purpose [18]. Electromyography (EMG) signal is also applied as a control source in FES-assisted walking for the detection of volitional intent of muscle [19]. Yeom et al. amplified the EMG signal of the TA and modulated the stimulation intensity in proportion to the integrated EMG envelope. The electrical pulses are then sent to the common peroneal nerve for dropfoot correction [20].

In these studies, FES applied to the TA was mainly triggered by the heel-off event. However, this event occurs during the push-off phase and before TA activation [17]. An earlier start of TA stimulation results in reduced ankle plantarflexion [21]. Spaich et al. suggested implementing a constant time interval before the onset timing of TA stimulation to extend the push-off phase before the ankle dorsiflexion [21]. Some studies have found that walking speed can affect the activation of TA [22, 23]. Shiavi et al. found that the duration of EMG activity decreased as speed increased [22]. In Winter et al.’s study, the shape of the EMG patterns generally remained similar at the different walking speeds and the duration of EMG activity was closely related to the normalized stride time [23]. Although the duration of TA activation changes with the walking speeds has been reported [24], the selection of speed-adaptive FES parameters for TA has not been investigated.

The objective of this study is to find a more physiologically appropriate FES design for dropfoot correction. Firstly, speed-related changes in onset timing and the duration of TA activation were examined. Next, linear models were built for the walking speed and time interval from the heel-off event to the onset timing of TA activation, as well as for the walking speed and the duration of the TA activation. The speed-adaptive stimulation (SAS) timing and duration were then calculated based on the two models and applied for FES-assisted walking. Finally, the performance of stimulation triggered by SAS, heel-off event (HOS) and no stimulation (NS) were compared during FES-assisted walking on both subjects with stroke and healthy subjects at different walking speeds.[…] 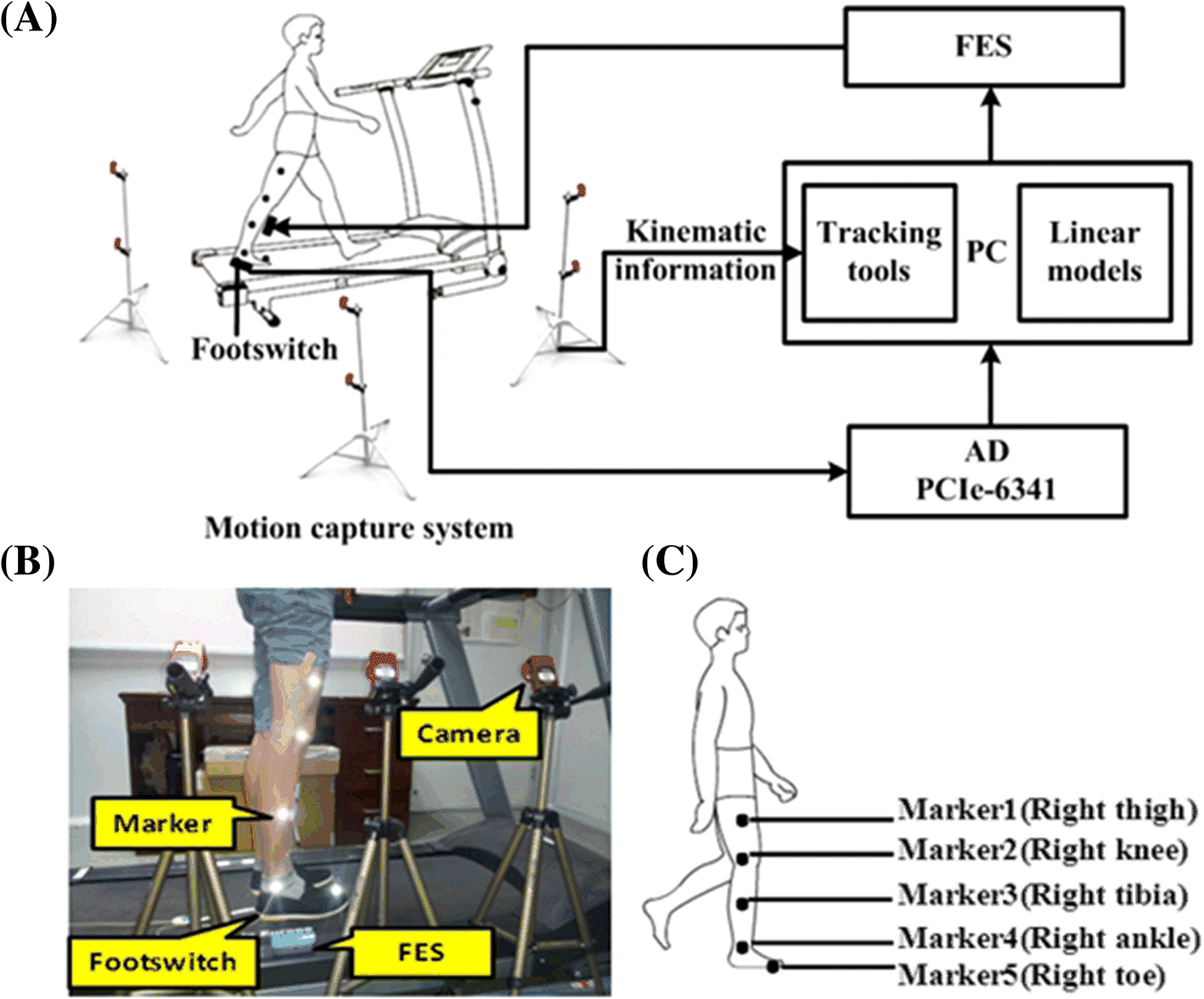 Fig. 1a The experiment setup of SAS condition; b one healthy subject on the treadmill for system evaluation; c the position of five markers on the right leg

This entry was posted on November 9, 2018, 02:10 and is filed under Functional Electrical Stimulation (FES), Gait Rehabilitation - Foot Drop. You can follow any responses to this entry through RSS 2.0. You can leave a response, or trackback from your own site.