After a stroke, during seated reaching with their paretic upper limb, many patients spontaneously replace the use of their arm by trunk compensation movements, even though they are able to use their arm when forced to do so. We previously quantified this proximal arm non-use (PANU) with a motion capture system (Zebris, CMS20s). The aim of this study was to validate a low-cost Microsoft Kinect-based system against the CMS20s reference system to diagnose PANU.

In 19 hemiparetic stroke individuals, the PANU score, reach length, trunk length, and proximal arm use (PAU) were measured during seated reaching simultaneously by the Kinect (v2) and the CMS20s over two testing sessions separated by two hours.

We showed that the Kinect could accurately and reliably assess PANU, reach length, trunk length and PAU during seated reaching in post stroke individuals. We conclude that the Kinect can offer a low-cost and widely available solution to clinically assess PANU for individualised rehabilitation and to monitor the progress of paretic arm recovery.

A large proportion of post-stroke individuals develop upper limb (UL) disabilities that result in difficulties in performing daily activities such as reaching for objects, which impacts their quality of life [1]. Stroke survivors often compensate for these impairments by adapting their movement patterns to incorporate additional degrees of freedom at new joints and body segments. One of the most common compensatory behaviours following a stroke is when patients replace the use of the paretic UL with the use of the less impaired UL. When such compensation persists even if the paretic UL recovered enough to be used, this is called learned non-use. However, the learned non-use phenomenon is more general than this specific case: it applies to any cases when individuals “forget” how to use their affected body parts and instead overuse compensations [2]. Here, our reasoning is that the learned non-use phenomenon explains why some patients “forget” how to use the proximal joints of their paretic UL and instead overuse trunk compensation during reaching [3]. Long-term non-use of shoulder-elbow movements is suspected to be detrimental to optimal upper limb functional recovery, due the “Use it or lose it” principle of use-dependent neural plasticity [4, 5]. Long-term overuse of trunk compensation may lead to suboptimal motor recovery of the paretic UL and secondary complications such as muscle contractures [6, 7, 8].

In our previous study [3], the non-use of shoulder-elbow joints during reaching has been termed “proximal arm non-use” and was assessed with the PANU score. The PANU score was derived by the substraction of the spontaneous proximal arm-use (SPAU) from the maximal proximal arm-use (MPAU). MPAU was recorded when patients were asked to voluntarily maximise proximal arm-use (or constrained not to use trunk movement). SPAU was recorded when patients were free to spontaneously balance their use of trunk and their use of proximal arm joints during hand reaching while seated. We showed that the PANU score had very good test-retest reliability. The PANU score did not depend on time since stroke. Higher PANU scores were moderately related to higher UL impairment (Fugl Meyer Assessment of the upper extremity-FM-UE) and to lower UL function (Box & Block Test-BBT). Moreover, 61% of patients with lower impairment (FM-UE proximal > 28/42) exhibited proximal arm non-use (PANU score > 6.5%) [3]. The PANU score provides information about the remaining functional motor reserve of the paretic arm (at the level of shoulder and elbow movements), which is not used by the post-stroke individual. Consequently, the PANU score potentially enables a clinician to select patients for specific rehabilitation programs focusing on the “maximal-use” of shoulder and elbow movements as well as to monitor the paretic arm recovery/compensation post-stroke. Therefore, PANU assessment is complementary with routine clinical measures of arm impairment (e.g., FM-UE) and function (e.g., BBT).

In our previous study [3], the PANU measurement using the ultrasound 3D motion capture system (CMS20s, Zebris) required to position markers on the hands and on the trunk of the patient during the seated reaching task. Although most clinical motion analysis devices use a marker-based system [9], recent developments in computer gaming technology brought forward marker-less infrared sensors such as the Microsoft’s Kinect (v2 for Xbox One) that captures the users’ body movement and allows them to interact within video games [10, 11, 12, 13, 14]. The Kinect sensor is low cost and reliably tracks body joints in real-time without requiring markers attached to the body [15]. Moreover, the official Microsoft software development kit (SDK) release permitted the Kinect sensor to be used not only as a gaming device, but also as a measurement system. The Kinect sensor showed comparable results in measuring shoulder movements during validity assessment with an established highly accurate 3D motion capture (6-camera Vicon) system [16, 17]. However, very few studies are available on the validity of the Kinect to accurately track trunk and hand motions in a reaching task [18], which is essential for quantifying the PANU score in post-stroke individuals.

Therefore, the purpose of this study was to validate a Kinect-based system to accurately and reliably quantify PANU scores and related kinematic parameters in individuals who sustained a stroke. Our clinical question was whether the Kinect sensor could replace the existing CMS20s sensor for PANU assessment. We hypothesised that the Kinect will provide similar measurements of PANU score and related kinematic variables as those determined by the reference CMS20s system.[…] 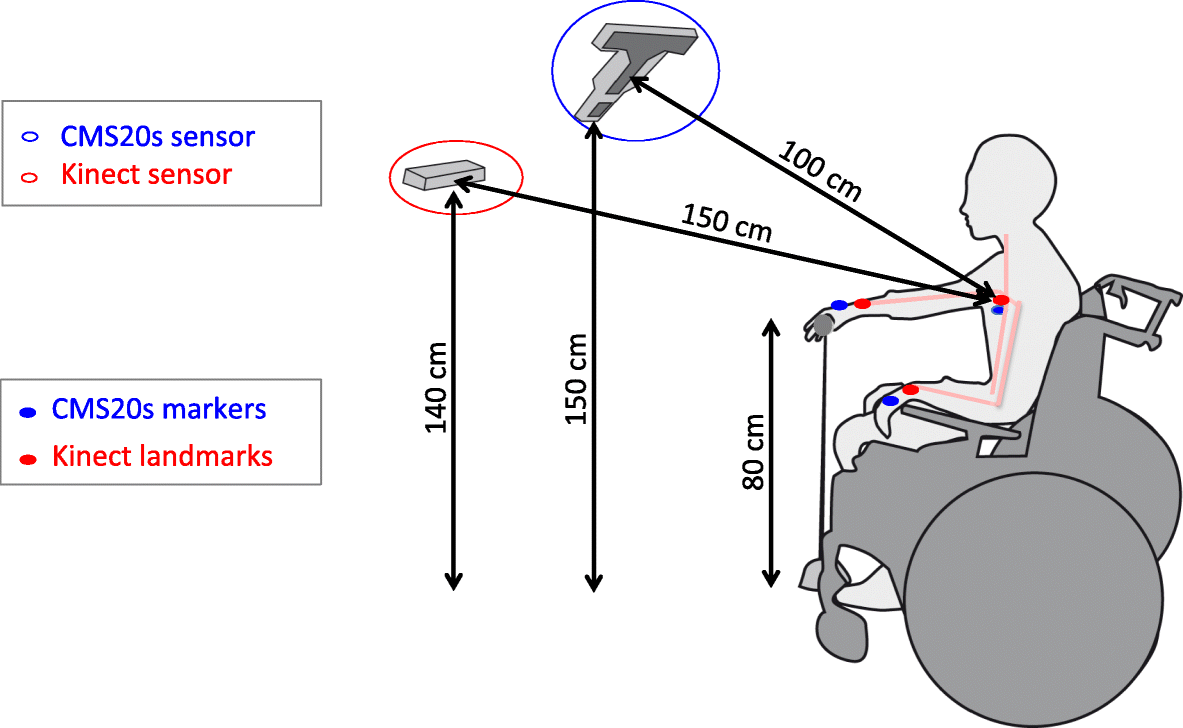 Fig. 1 Experimental setup. The quantification of the proximal arm non-use (PANU) score was simultaneously determined by the Kinect (blue encircled) and CMS20s (red encircled) movement recording systems. The CMS20s recorded the position of 3 markers placed on the manubrium, right dorsal hand, left dorsal hand (blue spots). The Kinect provided a skeleton of the person (orange) out of which we retained 3 “joints” corresponding best to the position of CMS20s markers on the body: Spine-Shoulder, WristRight, WristLeft

This entry was posted on November 15, 2018, 19:02 and is filed under Paretic Hand. You can follow any responses to this entry through RSS 2.0. You can leave a response, or trackback from your own site.