[WEB SITE] Half the brain encodes both arm movements 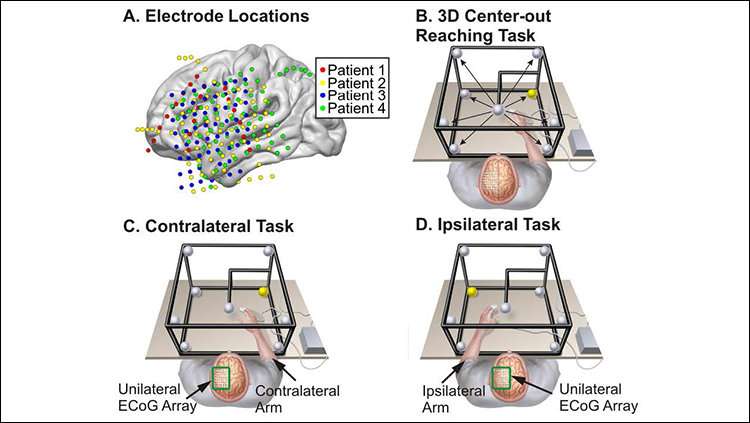 Patients implanted with electrocorticography arrays completed a 3D center-out reaching task. Electrode locations were based upon the clinical requirements of each patient and were localized to an atlas brain for display (A). B. Patients were seated in the semi-recumbent position and completed reaching movements from the center to the corners of a 50cm physical cube based upon cues from LED lights located at each target while hand positions and ECoG signals were simultaneously recorded. Each patient was implanted with electrodes in a single cortical hemisphere and performed the task with the arm contralateral (C) and ipsilateral (D) to the electrode array in separate recording sessions. Credit: Bundy et al., JNeuros(2018)

Individual arm movements are represented by neural activity in both the left and right hemispheres of the brain, according to a study of epilepsy patients published in JNeurosci. This finding suggests the unaffected hemisphere in stroke could be harnessed to restore limb function on the same side of the body by controlling a brain-computer interface.

Eric Leuthardt, David Bundy, and colleagues explored brain activity during such ipsilateral movements during a reaching task in four epilepsy patients whose condition enabled invasive monitoring of their brains through implanted electrodes. Using a machine learning algorithm, the researchers demonstrate successful decoding of speed, velocity, and position information of both left and right arm movements regardless of the location of the electrodes.

In addition to advancing our understanding of how the brain controls the body, these results could inform the development of more effective rehabilitation strategies following brain injury. 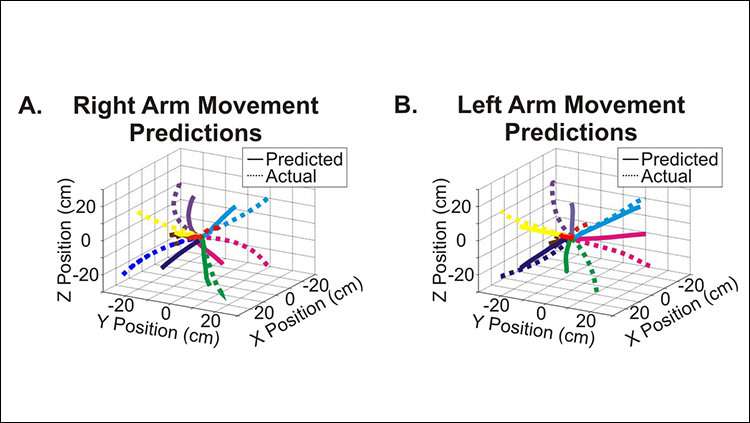 In the study a patient implanted with electrodes only on the left side of the brain was asked to make movements to 8 targets in 3D space with both their right and left arms. Using recordings from these electrodes, the authors were able to predict the hand speed, direction, and position for both arms showing that movements of both arms are encoded on one side of the brain. Credit: David Bundy and Eric Leuthardt

via Half the brain encodes both arm movements

This entry was posted on December 10, 2018, 22:51 and is filed under REHABILITATION. You can follow any responses to this entry through RSS 2.0. You can leave a response, or trackback from your own site.