[ARTICLE] Arm Ability Training (AAT) Promotes Dexterity Recovery After a Stroke—a Review of Its Design, Clinical Effectiveness, and the Neurobiology of the Actions – Full Text

Arm Ability Training (AAT) has been specifically designed to promote manual dexterity recovery for stroke patients who have mild to moderate arm paresis. The motor control problems that these patients suffer from relate to a lack of efficiency in terms of the sensorimotor integration needed for dexterity. Various sensorimotor arm and hand abilities such as speed of selective movements, the capacity to make precise goal-directed arm movements, coordinated visually guided movements, steadiness, and finger dexterity all contribute to our “dexterity” in daily life. All these abilities are deficient in stroke patients who have mild to moderate paresis causing focal disability. The AAT explicitly and repetitively trains all these sensorimotor abilities at the individual’s performance limit with eight different tasks; it further implements various task difficulty levels and integrates augmented feedback in the form of intermittent knowledge of results. The evidence from two randomized controlled trials indicates the clinical effectiveness of the AAT with regard to the promotion of “dexterity” recovery and the reduction of focal disability in stroke patients with mild to moderate arm paresis. In addition, the effects have been shown to be superior to time-equivalent “best conventional therapy.” Further, studies in healthy subjects showed that the AAT induced substantial sensorimotor learning. The observed learning dynamics indicate that different underlying sensorimotor arm and hand abilities are trained. Capacities strengthened by the training can, in part, be used by both arms. Non-invasive brain stimulation experiments and functional magnetic resonance imaging data documented that at an early stage in the training cortical sensorimotor network areas are involved in learning induced by the AAT, yet differentially for the tasks trained. With prolonged training over 2 to 3 weeks, subcortical structures seem to take over. While behavioral similarities in training responses have been observed in healthy volunteers and patients, training-induced functional re-organization in survivors of a subcortical stroke uniquely involved the ipsilesional premotor cortex as an adaptive recruitment of this secondary motor area. Thus, training-induced plasticity in healthy and brain-damaged subjects are not necessarily the same.

Arm paresis post stroke shows a bi-modal distribution. Many stroke survivors have either severe arm paresis and are only able to use their arms functionally in everyday life to a very limited extent, if at all, or mild to moderate arm paresis with the ability to use their paretic arm for functional tasks, yet with a lack of dexterity (1, 2). Thus, the motor control deficits of these subgroups are quite different and hence so too are their therapeutic needs.

Clinically, stroke survivors with mild to moderate arm paresis have reduced strength and endurance of their paretic arm and are functionally limited by a lack of speed, accuracy and co-ordination of arm, hand, and finger movements and a lack of dexterity when handling objects. Key to understanding any functional deficits and the need and opportunities to improve function by training is a focused analysis of the specific motor control deficits involved in this clinical syndrome. A way to do this is to test various domains of sensorimotor control that have been shown to be independent by factorial analysis (3, 4).

When motor performance of healthy people across various tasks has been analyzed by factorial analysis certain independent arm motor abilities have been documented. These are different independent sensorimotor capacities that together contribute to our skilfulness in everyday life. What are these abilities? They are our ability to make fast selective wrist and finger movements (wrist-finger speed), to manipulate small objects (finger dexterity) or larger objects (manual dexterity) efficiently, our ability to keep our arm steady (steadiness), to move our arm quickly and precisely to an intended target (aiming), or to move it under constant visual control along a line (tracking) (5).

When tested among stroke survivors with mild to moderate arm paresis all these abilities are deficient, indicating the complex nature of sensorimotor control deficits in this clinical condition (6, 7).

The Arm Ability Training (AAT) was designed to train all these sensorimotor abilities and thus to meet the specific rehabilitation demands of this subgroup of stroke survivors (8, 9). The eight training tasks collectively cover these affordances (Figure 1). 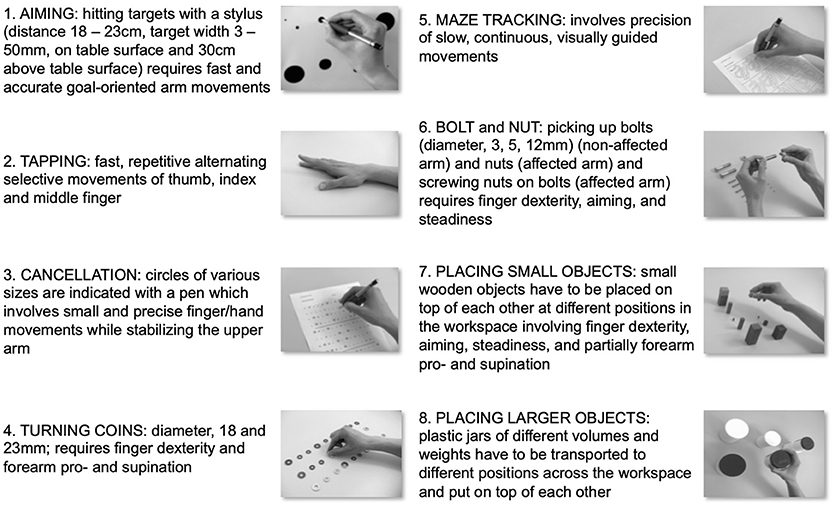 Figure 1. Training tasks of the Arm Ability Training. Description of the eight training tasks of the Arm Ability Training (AAT) that are repetitively exercised daily. Together they train various independent arm and hand sensorimotor abilities. During the AAT sensorimotor performance is trained at its individual limit. Further aspects thought to promote motor learning are a high repetition rate of trained tasks, variation in the difficulty of training tasks, and the augmented feedback provided in the form of intermittent knowledge of the results.

Continue —->  Frontiers | Arm Ability Training (AAT) Promotes Dexterity Recovery After a Stroke—a Review of Its Design, Clinical Effectiveness, and the Neurobiology of the Actions | Neurology

This entry was posted on December 23, 2018, 01:55 and is filed under Neuroplasticity, Paretic Hand. You can follow any responses to this entry through RSS 2.0. You can leave a response, or trackback from your own site.