Background: Hemiplegic upper extremity activity obstacle is a common movement disorder after stroke. Compared with a single intervention, sequential protocol or combination of several techniques has been proven to be better for alleviating motor function disorder. Non-invasive neuromodulation techniques such as repetitive transcranial magnetic stimulation (rTMS) and motor imagery (MI) have been verified to augment the efficacy of rehabilitation.

Conclusions: LF-rTMS combined with MI had a positive effect on motor function of upper limb and can be used for the rehabilitation of upper extremity motor recovery in stroke patients.

Decreased mobility of hemiplegic upper limb is a common dyskinesia after stroke. At present, clinical researchers have established a number of treatments to improve upper extremity motor function (1). Compared with a single intervention, a combination approach of different techniques has been proven to be better for alleviating movement disorder (2). Lots of trials have shown that movement function improvement after stroke can be enhanced by non-invasive brain stimulation techniques combined with conventional clinical practice (3–6).

Repetitive transcranial magnetic stimulation (rTMS) is one of non-invasive brain stimulations, and could modulate cortical activity. Stroke is considered to be one possible reason for imbalance of interhemispheric cortical inhibition. rTMS could rebulid the interhemisphere balance by down-regulating the excitability of the non-lesioned hemisphere with low frequency stimulation or up-regulating the lesioned excitability by high frequency stimulation (6). Randomized controlled trials have shown that short courses of inhibitory, contralesional rTMS can improve the motor function of hemiplegia after stroke (7, 8). Evidence suggested that maximum control of the lesioned hemisphere is associated with better function (9, 10). Early damage affected the ability of upper motor neurons to compete with lateral neurons to dominate motor neurons (11). Inhibition of contralateral primary motor cortex (M1) with 1 Hz rTMS may enhance hemispheric motor function. This method has revealed efficacy in the stroke rehabilitation for adults although they do not share the same models (8). Recently, the positive effects of HF-rTMS and LF-rTMS on movement disorder after stroke have been supported by accumulating evidence (7). And LF-rTMS has been confirmed to be in correlation with improved function in patients with chronic stroke (12, 13). Nowadays, a meta-analysis by Zhang et al. evaluated the therapeutic potential of LF-rTMS on stroke-induced upper limb movement disorder and cortex plasticity. This research supported that, as an add-on therapy, LF-rTMS successfully alleviated the hemiplegic upper limb motor deficit and significantly promoted upper limb function improvement after stroke (14).

Another non-invasive neuromodulation technique-motor imagery (MI), has been validated to increase the efficacy of rehabilitation and improve the performance of tasks associated with MI in patients after stroke (15–17). The functional recovery of most stroke patients occurred mainly in the first 3 months, and the functional gain obtained in the chronic phase was limited (18). A possible cause of limited functional recovery in the chronic phase is learned nouse. Patients with severe impairment cannot use their paretic limbs in daily activities may be the reason (19). MI is a dynamic state during which the subject mentally simulates a specific movement without any obvious movement (20). It means that MI has no strict restrictions on the patient’s upper limb motor function, so it can be applied to stroke patients with poor function in chronic phase. According to previous studies, MI and motor execution share the same neural networks related to motor function (17, 21, 22). These findings support the idea that MI can be used as a substitute for physical exercise which is difficult for patients to do (23). MI training was assumed to enhance motor recovery in stroke rehabilitation (24). Based on traditional rehabilitation training, MI training is more effective than conventional training alone (17). For example, Kang et al. and Xu et al. demonstrated an increase in neural activity in the motor area during MI training (25, 26). And Kawakami et al. also investigated changes of cortex in reciprocal inhibition following MI in patients with chronic stroke, and reported positive plastic changes during mental practice with MI (27). In another pilot study, Mihara et al. demonstrated that NIRS-mediated neurofeedback MI could enhance the ipsilesional premotor area activation in correlation with MI training and could have significant effects on the motor deficit recovery in stroke patients. Besides these findings, they also found that the change of cortical activation was related to the recovery of the hand function (19).

In view of the fact that rTMS and MI have no strict restrictions on the limb function of patients with chronic stroke, this study intends to combine the two interventions to maximize the motor function recovery of patients. As the author know, few studies explore whether the effect of LF-rTMS can be enhanced by combining with MI on upper extremity activity. In this study, we hypothesize that combination therapy of LF-rTMS with MI training will promote recovery from upper limb movement disorder in patients after chronic stroke; we also predict that activities of daily living might improve accordingly.

Therefore, the objective was to investigate the effects of LF-rTMS combined with MI on improving motor functions of hemiplegic upper extremity in chronic stroke patients.[…] 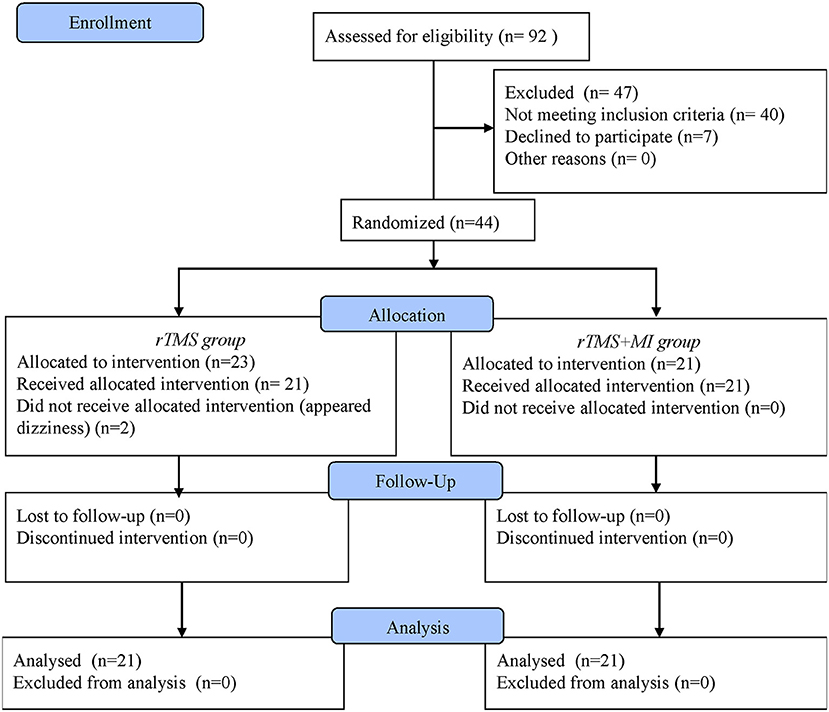 Figure 1. Flow Diagram of the Trial.

This entry was posted on February 24, 2019, 15:44 and is filed under Paretic Hand, tDCS/rTMS. You can follow any responses to this entry through RSS 2.0. You can leave a response, or trackback from your own site.