Blood biomarkers have been explored for their potential to provide objective measures in the assessment of traumatic brain injury (TBI). However, it is not clear which biomarkers are best for diagnosis and prognosis in different severities of TBI. Here, we compare existing studies on the discriminative abilities of serum biomarkers for four commonly studied clinical situations: detecting concussion, predicting intracranial damage after mild TBI (mTBI), predicting delayed recovery after mTBI, and predicting adverse outcome after severe TBI (sTBI). We conducted a literature search of publications on biomarkers in TBI published up until July 2018. Operating characteristics were pooled for each biomarker for comparison. For detecting concussion, 4 biomarker panels and creatine kinase B type had excellent discriminative ability. For detecting intracranial injury and the need for a head CT scan after mTBI, 2 biomarker panels, and hyperphosphorylated tau had excellent operating characteristics. For predicting delayed recovery after mTBI, top candidates included calpain-derived αII-spectrin N-terminal fragment, tau A, neurofilament light, and ghrelin. For predicting adverse outcome following sTBI, no biomarker had excellent performance, but several had good performance, including markers of coagulation and inflammation, structural proteins in the brain, and proteins involved in homeostasis. The highest-performing biomarkers in each of these categories may provide insight into the pathophysiologies underlying mild and severe TBI. With further study, these biomarkers have the potential to be used alongside clinical and radiological data to improve TBI diagnostics, prognostics, and evidence-based medical management.

Traumatic brain injury (TBI) is a common cause of disability and mortality in the US (1) and worldwide (2). Pathological responses to TBI in the CNS include structural and metabolic changes, as well as excitotoxicity, neuroinflammation, and cell death (3, 4). Fluid biomarkers that may track these injury and inflammatory processes have been explored for their potential to provide objective measures in TBI assessment. However, at present there are limited clinical guidelines available regarding the use of biomarkers in both the diagnosis of TBI and outcome prediction following TBI. To inform future guideline formulation, it is critical to distinguish between different clinical situations for biomarker use in TBI, such as detection of concussion, prediction of positive and negative head computed tomography (CT) findings, and prediction of outcome for different TBI severities. This allows for comparisons to determine which biomarkers may be used most appropriately to characterize different aspects of TBI.

The identification of TBI severity has become a contentious issue. Currently, inclusion in TBI clinical trials is primarily based on the Glasgow Coma Scale (GCS), which stratifies patients into categories of mild, moderate, and severe TBI. The GCS assesses consciousness and provides prognostic information, but it does not inform the underlying pathologies that may be targeted for therapy (5, 6). Furthermore, brain damage and persistent neurological symptoms can occur across the spectrum of TBI severity, limiting the use of GCS-determined injury severity to inform clinical management. Biomarkers in TBI have the potential to provide objective and quantitative information regarding the pathophysiologic mechanisms underlying observed neurological deficits. Such information may be more appropriate for guiding management than initial assessments of severity alone. Since the existing literature primarily focuses on applications of biomarkers in either suspected concussion, mild TBI (mTBI), or severe TBI (sTBI), we will discuss biomarker usage in these contexts.

Concussion is a clinical syndrome involving alteration in mental function induced by head rotational acceleration. This may be due to direct impact or unrestrained rapid head movements, such as in automotive crashes. Although there are over 30 official definitions of concussion, none include the underlying pathology. Missing from the literature have been objective measures to not only identify the underlying pathology associated with the given clinical symptoms, but also to indicate prognosis in long-term survival. Indeed, current practices in forming an opinion of concussion involve symptom reports, neurocognitive testing, and balance testing, all of which have elements of subjectivity and questionable reliability (7). While such information generally reflects functional status, it does not identify any underlying processes that may have prognostic or therapeutic consequences. Furthermore, because patients with concussion typically present with negative head CT findings, there is a potential role for blood-based biomarkers to provide objective information regarding the presence of concussion, based on an underlying pathology. This information could inform management decisions regarding resumption of activities for both athletes and non-athletes alike.

Blood-based biomarkers have utility far beyond a simple detection of concussion by elucidating specific aspects of the injury that could drive individual patient management. For example, biomarkers may aid in determining whether a mTBI patient presenting to the emergency department requires a CT scan to identify intracranial pathology. The clinical outcome for a missed epidural hematoma in which the patient is either discharged or admitted for routine observation is catastrophic; 25% are left severely impaired or dead (8). The Canadian CT Head Rule (9) and related clinical decision instruments achieve high sensitivities in predicting the need for CT scans in mild TBI cases. However, they do this at specificities of only 30–50% (10). Adding a blood biomarker to clinical evaluation may be useful to improve specificity without sacrificing sensitivity, as recently suggested (11). In addition, given concern about radiation exposure from head CT scans in concussion cases, particularly in pediatric populations, identification of patients who would be best assessed with neuroimaging is crucial. Thus, the use of both sensitive and specific biomarkers may serve as cost-effective tools to aid in acute assessment, especially in the absence of risk factors for intracranial injury (12). S-100B, an astroglial protein, has been the most extensively studied biomarker for TBI thus far and has been incorporated into some clinical guidelines for CT scans (13, 14). However, S-100B is not CNS-specific (15, 16) and has shown inconsistent predictive capacity in the outcome of mild TBI (17, 18). Given that several other promising biomarkers have also been investigated in this context, it is important to evaluate and compare the discriminative abilities of S-100B with other candidate blood-based biomarkers for future use.

Blood biomarkers also have the potential to help predict unfavorable outcomes across the spectrum of TBI severity. Outcome predication is difficult; in mTBI, existing prognostic models performed poorly in an external validation study (19). Identifying biomarkers that best predict delayed recovery or persistent neurological symptoms following mTBI would help with the direction of resources toward patients who may benefit most from additional rehabilitation or prolonged observation. In sTBI, poorer outcome has often been associated with a low GCS score (20). However, factors such as intoxication or endotracheal intubation may make it difficult to assess GCS reliably in the acute setting (21, 22). The addition of laboratory parameters to head CT and admission characteristics have improved prognostic models (23). Thus, prognostic biomarkers in sTBI could help determine whether patients are likely to benefit from intensive treatment. Several candidate biomarkers that correlate with various pathologies of mild and severe TBI have been studied (24), but their relative prognostic abilities remain unclear.

Existing reviews on biomarkers in TBI have provided valuable insight into the pathologic correlates of biomarkers, as well as how biomarkers may be used for diagnosis and prognosis (25–31). However, there has been no previous quantitative comparison of the literature regarding biomarkers’ discriminative abilities in specific clinical situations. Here, we compare existing studies on the discriminative abilities of serum biomarkers for four commonly studied clinical situations: detecting concussion, predicting intracranial damage after mTBI, predicting delayed recovery after mTBI, and predicting adverse outcome after sTBI.[…] 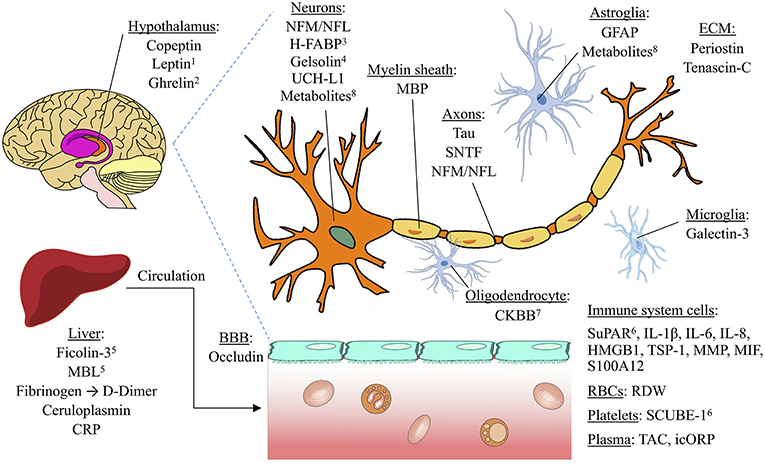 This entry was posted on April 29, 2019, 23:10 and is filed under Uncategorized. You can follow any responses to this entry through RSS 2.0. You can leave a response, or trackback from your own site.