Repetitive somatosensory electrical stimulation (SES) of forelimb peripheral nerves is a promising therapy; studies have shown that SES can improve motor function in stroke subjects with chronic deficits. However, little is known about how SES can directly modulate neural dynamics. Past studies using SES have primarily used noninvasive methods in human subjects. Here we used electrophysiological recordings from the rodent primary motor cortex (M1) to assess how SES affects neural dynamics at the level of single neurons as well as at the level of mesoscale dynamics.

We performed acute extracellular recordings in 7 intact adult Long Evans rats under ketamine-xylazine anesthesia while they received transcutaneous SES. We recorded single unit spiking and local field potentials (LFP) in the M1 contralateral to the stimulated arm. We then compared neural firing rate, spike-field coherence (SFC), and power spectral density (PSD) before and after stimulation.

Following SES, the firing rate of a majority of neurons changed significantly from their respective baseline values. There was, however, a diversity of responses; some neurons increased while others decreased their firing rates. Interestingly, SFC, a measure of how a neuron’s firing is coupled to mesoscale oscillatory dynamics, increased specifically in the δ-band, also known as the low frequency band (0.3- 4 Hz). This increase appeared to be driven by a change in the phase-locking of broad-spiking, putative pyramidal neurons. These changes in the low frequency range occurred without a significant change in the overall PSD.

Repetitive SES significantly and persistently altered the local cortical dynamics of M1 neurons, changing both firing rates as well as the SFC magnitude in the δ-band. Thus, SES altered the neural firing and coupling to ongoing mesoscale dynamics. Our study provides evidence that SES can directly modulate cortical dynamics.

Somatosensory input is essential for skilled movements [1,2,3]; this is particularly true for dexterous movements [1, 4,5,6]. Interestingly, the somatosensory system has been shown to experience relatively rapid bidirectional changes in organization as a result of repetitive manipulations of peripheral inputs. Consistent with this notion are seminal studies in both animals and humans which demonstrated that reductions in sensory feedback, either by denervation or ischemic nerve block, induced changes in motor representations [7, 8].

Studies have also shown that increases in afferent input by stimulating peripheral pathways (i.e. repetitive somatosensory electrical stimulation or SES) can alter sensorimotor representations of the stimulated body part [9, 10]. One of the first studies examining this neuromodulation method found that sensory stimulation of oral structures resulted in prolonged changes in excitability as well as an increase in the area of representation determined using functional imaging [11]. Consistent with these results are studies demonstrating that altered patterns of physical contacts to the fingers can also persistently reorganize sensory maps [12, 13]. Importantly, repetitive SES has also proven to be a promising therapeutic tool for motor rehabilitation [10, 14,15,16].

In both humans and rodents, SES can increase excitability as measured by responses to transcranial magnetic stimulation (TMS) pulses [9, 17]. Past studies have used non-invasive measures to examine cortical excitability such as motor evoked potentials (MEPs) with TMS [9, 17] and cortical reorganization using blood oxygenation signals [11]. It remains unclear what are the precise mechanisms underlying these changes. For example, the observed change in the evoked MEPs following SES may occur without changes in brainstem electrical stimulation-evoked potentials or spinal reflexes [9, 18, 19]. This suggests the possibility that the cortex may be an important site of plasticity. While our recent study showed that SES can also modify low-frequency dynamics as measured using electroencephalogram (EEG) [20], it remains unclear if these changes are local to cortex. Invasive electrophysiology offers one method to assess if SES can directly alter local motor cortical dynamics.

While the body of literature summarized above has provided important mechanistic insight, little is known about how SES interacts with ongoing cortical dynamics at the level of single neurons and groups of neurons, or neural ensembles. Single neurons are a fundamental unit of the nervous system. The coordinated firing of neural ensembles, e.g. co-firing of neurons in a temporally coupled manner, is now also recognized as an important module for information processing [21,22,23,24,25,26]. In addition, oscillations may provide a mechanism for dynamic coordination of ensembles across motor and sensory areas [21,22,23,24,25, 27]. Oscillations likely reflect synchronized rhythmic excitability linked to coordinated firing of neurons [28]. Our collective understanding of both single neuron and ensemble firing patterns has greatly improved our understanding of how neural activity patterns underlie complex sensory and motor behaviors. Similarly, it is likely that such activity may play an important role in driving neural plasticity after injury and during neuromodulation using methods such as SES.

The goal of this study was to develop a model of the cortical effects of SES using high-resolution, invasive recording of neurons. We were particularly interested in understanding the diversity of single neuron responses to SES. It is unlikely that all neurons respond identically to a given perturbation. This may be, in part, the result of the multiple cell-types in a given region and the diversity of network connectivity for single neurons [29]. We also wanted to compare changes in neural activity related to larger scale network oscillatory activity. More specifically, we examined the effects of SES on primary motor cortex (M1) at the level of single neuron firing rates as well as the neural coupling to ongoing spontaneous oscillations. We found that SES could independently change both the firing rate and the phase locking, i.e. the consistency of the neural firing relative to oscillatory dynamics. Together, our results provide evidence that SES can directly modulate neural dynamics in M1.

All animal procedures were in accordance with protocols approved by the Institutional Animal Care and Use Committee at the San Francisco Veterans Affairs Medical Center. Adult male Long Evans rats (n = 8, 250-400 g, ~ 8 weeks old, Charles River Laboratories) were housed in a 12 h light:12 h dark cycle with lights out at 6:00 AM and were kept under controlled temperature. One animal was excluded from the study due to significant recording drift and electrical noise in the recording, thus n = 7 animals were used for the analysis shown. Animals were initially anesthetized using a ketamine/xylazine cocktail (85 mg/kg ketamine, and 10 mg/kg xylazine), with supplemental ketamine (at half of the induction dose) given every 40–60 min as needed to maintain a stable anesthetic level, and also to maintain anesthesia at stage III characterized by predominantly slow oscillations. Moreover, 0.05 mg/kg of atropine was given separately to counter respiratory and cardiac depression, and decrease secretion. Animals were sacrificed at the end of the recordings.

After anesthesia induction, transcutaneous stimulation electrodes were clipped near forelimb peripheral nerves (medial, ulnar, and radial nerve), in the configuration noted in Fig. 1a. These copper metal clips were wrapped around the forelimb and then connected to a Multi-Channel Systems Stimulus Generator (MCS STG4000 series) to deliver transcutaneous stimulation. SES current parameters were set by determining the maximum amount of current where no evoked movement in the forelimb was seen (typically 300–750 μA currents). 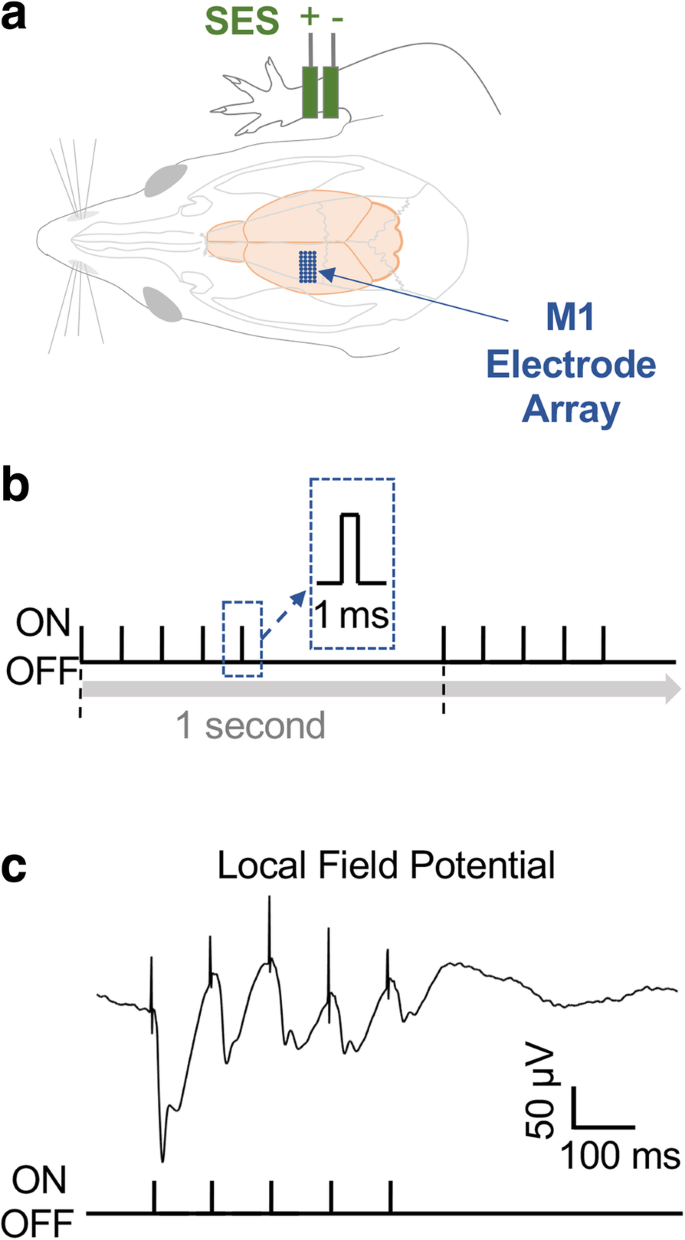 This entry was posted on July 22, 2019, 01:18 and is filed under REHABILITATION. You can follow any responses to this entry through RSS 2.0. You can leave a response, or trackback from your own site.