Add-on robot-mediated therapy has proven to be more effective than conventional therapy alone in post-stroke gait rehabilitation. Such robot-mediated interventions routinely use also visual biofeedback tools. A better understanding of biofeedback content effects when used for robotic locomotor training may improve the rehabilitation process and outcomes.

12 patients were randomized into two treatment groups, A and B, based on two different biofeedback training. For both groups, study protocol consisted of 12 Lokomat sessions, 6 for each biofeedback condition, 40 min each, 3 sessions per week of frequency. All patients performed Lokomat trainings as an add-on therapy to the conventional one that was the same for both groups and consisted of 40 min per day, 5 days per week. The primary outcome was the Modified Ashworth Spasticity Scale, and secondary outcomes included clinical, neurological, mechanical, and personal experience variables collected before and after each biofeedback training.

Lokomat training significantly improved gait/daily living activity independence and trunk control, nevertheless, different effects due to biofeedback content were remarked. EMGb was more effective to reduce spasticity and improve muscle force at the ankle, knee and hip joints. Robot data suggest that Rb induces more adaptation to robotic movements than EMGb. Furthermore, Rb was perceived less demanding than EMGb, even though patient motivation was higher for EMGb. Robot was perceived to be effective, easy to use, reliable and safe: acceptability was rated as very high by all patients.

Specific effects can be related to biofeedback content: when muscular-based information is used, a more direct effect on lower limb spasticity and muscle activity is evidenced. In a similar manner, when biofeedback treatment is based on joint torque data, a higher patient compliance effect in terms of force exerted is achieved. Subjects who underwent EMGb seemed to be more motivated than those treated with Rb.

Stroke is the leading cause of acquired disability throughout the world, with increasing survival rates as medical care and treatment techniques improve [1]. Post-stroke disability often affects mobility, balance, and walking [2]. The majority of stroke survivors rank walking recovery among their top rehabilitation goals [3,4,5]. Furthermore, the ability to walk is one of the most important determining factors for returning home after stroke [4].

Recovery of walking mainly occurs within the first 11 weeks after a stroke [6]; indeed, further recovery after that time is rare [7]. Overall, between 30 and 40% of stroke survivors are not able to regain a functional gait after rehabilitation [4, 8]. These data have stimulated advances in many different innovative technological approaches to improve the gait rehabilitation efficacy.

Modern concepts favour task-specific repetitive rehabilitation approaches [9], with high intensity [10] and early multisensory stimulation [11]. These requirements are met by robot assisted gait training (RAGT) approaches. Recent studies on stroke patients have reported that when conventional therapy and RAGT are combined, compared to conventional therapy alone, gait recovery significantly improves [12] and patients are more likely to recover independent walking [13]. In particular, non-ambulatory patients in the sub-acute phase are the group most likely to benefit from this type of training [13].

This high interest in robotic therapy has attracted attention to human robot interactions in the rehabilitation framework, and a consensus is forming on the importance of top-down approaches in rehabilitation, particularly when dealing with robotic devices [14]. The critical aspects of top-down approaches are multifarious and include motivation, active participation [15], learning skills [16] and error-driven-learning [17], evidencing the key aspects of biofeedback information to guide and improve patient robot interactions.

Thus, biofeedback is, at present, the main approach to guide top-down control mechanisms, which represents a powerful tool to drive recovery. To this aim, the patient has to be aware of the differences between on-line performance and the desired performance [18]. In this scenario, many different error signals can be used, and at present, no indication exists for their specific effects on performances [18, 19]. Many biological parameters have been used to feed biofeedback information to patients in different stroke gait rehabilitation scenarios [20].

In general, in spite of the information content, biofeedback has been associated with improved outcomes in several gait pathologies [21,22,23,24]. Among diverse types of biofeedback, the most generally employed in gait rehabilitation paradigms have been electromyographic (EMG), kinematic as well as robot generated indexes [25], although no comparisons have been made among these approaches.

At present, many robotic devices for gait rehabilitation in stroke are commercially available [26]. Two main classes can be identified, those based on body weight support systems (BWSS) and over ground exoskeletons. Overall, BWSS are the most widely used in rehabilitation centres, with Lokomat, Gait Trainer and GEO systems being the most popular. The present study focuses on the biofeedback content effects during Lokomat gait training in stroke survivors. Commercially available Lokomat biofeedback tools are based either on navigational or robot-generated information. The latter approach focuses on the forces that assist patients to follow the predefined gait pattern due to force transducers built into the robot drives [25].

Generally effectiveness of Lokomat training is assessed with gait functional outcome measures. Specific data about spasticity effects of Lokomat training are rare, and mainly focused on spinal cord injury (SCI) patients and on ankle muscles. In this framework few studies addressed positive effects of Lokomat training on reducing spasticity and improving volitional control of the spastic ankle in persons with incomplete SCI [27], and on reducing the abnormal modulation of neuromuscular properties that arises as secondary effects after SCI [28, 29]. To our knowledge, as concern stroke population, a single study compared conventional rehabilitation versus Lokomat add-on training selecting spasticity as a secondary outcome, demonstrating no significant robotic gait training effects [30].

Furthermore, no studies have either analysed the use of an electromyographic -based biofeedback (EMGb) of hip, knee and ankle muscles during training with the Lokomat robot, or compared the impact of different biofeedback types on Lokomat robotic gait training. To this end, we designated a randomized controlled trial, because this type of study is the most rigorous and robust research method of determining whether a cause-effect relation exists between an intervention and an outcome [31]. In this pilot study we compared two different types of biofeedback: a robot generated joint torque biofeedback (Rb) versus a novel on-line EMGb. Thus, a randomized cross-over clinical trial using the Lokomat RAGT device, was conducted focusing on patients’ performances, personal experience and robot forces data in sub-acute non ambulatory patients. In particular the main outcome measure was considered the lower limb spasticity. Considering that in stroke population, spasticity may affect quality-of-life and can be highly detrimental to daily function [32], we also analysed patients’ personal experience related to training gait with the Lokomat system.[…] 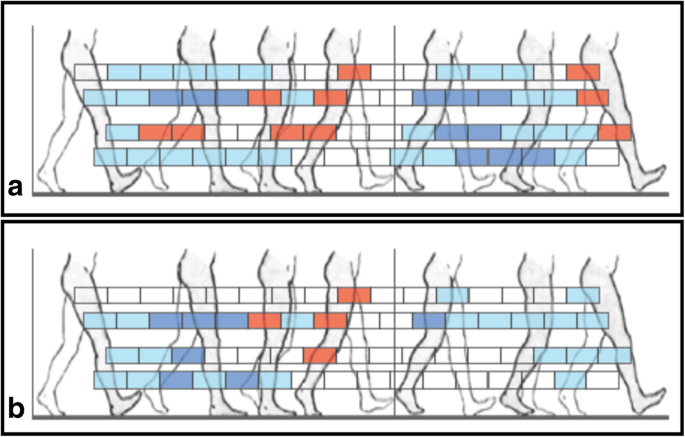 Representative image of visual biofeedback provided to the patient (PT6) according to on-line EMG activity during first (a) and last (b) EMGb training session. EMG data were displayed on the screen with 4 colour stripes partitioned into 16 stages within the gait cycle. First stripe referred to VL-RF, second stripe refers to BF, third stripe referred to GM-SOL and last stripe referred to TA. Coloured lines in the patient’s feedback were generated as follows: i) Red colour means that the signal is higher than in the template, or ii) Blue means that the signal is lower than in the template. From Fig. 3-b is evident a more physiological muscle activity during the whole gait cycle

This entry was posted on July 25, 2019, 23:13 and is filed under Gait Rehabilitation - Foot Drop, Rehabilitation robotics. You can follow any responses to this entry through RSS 2.0. You can leave a response, or trackback from your own site.