Posted by Kostas Pantremenos in Paretic Hand, REHABILITATION on November 26, 2019

Posted by Kostas Pantremenos in REHABILITATION on November 26, 2019

How to improve stroke

Question: How do you improve patient’s hand, fingers, and leg movement? Please tell me some exercises for my mother. Thanks.

Answer: If your mother already has some movement in her hand and fingers then I would recommend some of the exercises from this website’s hand exercises page at www.stroke-rehab.com/hand-exercises.html.

If she does not have any movement or only little movement in her hand, then I recommend trying to put weight through the arm to facilitate sensory input. This can be done by placing the hand on a firm surface and helping to support her elbow while she leans into the hand. When there is little movement in the upper extremity, it’s best to eliminate gravity as much as possible and provide assist as needed. I often place the hand on a ball and see if the patient can elicit movement. If approved by her MD, you could talk to a therapist about using electrical stimulation to facilitate movement.

Some simple hand and arm exercises I use after a stroke are as follows (stretch the hand prior to exercises):

2) Once they can keep the hand on the ball, try rolling the ball gently side to side and forward and back

3) Once they can roll the ball, place both hands on the sides of the ball (soccer ball works well) and try to lift the ball off their lap using both hands and

without the weak hand falling off

4) As they are able to lift the ball, work on lifting the ball higher or moving it side to side

6) Once they can move hand off/on ball with some control, work on placing hand on smaller objects such as a plastic cup and letting go. Progress to trying to lift the cup.

Weight bearing is also good for the leg. If your mother is able to stand, have a therapist show her how to shift weight onto the weak leg and work on weight bearing on the affected side. A physical therapist can also show you tapping techniques to help facilitate movement. For example, to elicit straightening the knee, you would tap the top of the thigh.

If you are looking for therapy ideas, I suggest looking on You Tube for stroke rehab exercises. Many therapists and patients have recorded their therapy sessions which might give you ideas on what would work for your mother. You should always consult a therapist or physician that has worked with your mom to make sure any exercises would be appropriate for her.

Join in and write your own page! It’s easy to do. How? Simply click here to return to Stroke Rehabilitation Questions.

by Jayesh Mehta
(Wellingborough in UK)

Question: I suffered a hemorrhagic stroke in April 2009 and subsequently got senses back in all of my body. As an effect of the stroke, my left side, even though movement feels OK, is a bit weak due to prolong time in bed (8 months in hospital+rehab). My body has lost its strength and hence I can’t get up from a sitting position. I have joined a gym to gain strength and am a full time worker post stroke. The reason for this note is to see what you can suggest to get some strength back – to be able to get up by myself and take a few steps, etc. (not looking for running down the street). Please share anything that you think might help.

Answer: I like to use hi-lo mats to help patients improve their ability to stand from a sitting position. A hi-lo mat can be adjusted to a low or high position. I will have my patients sit on the mat and then raise the height. We will practice weight bearing through the legs with the mat elevated (with the buttocks still on the mat) and then will practice sit to stand from this position. I will block the knee on their weak side if necessary to prevent the leg from buckling. An air splint can also be used to help keep the leg from collapsing. Once a patient has gained confidence in standing then I work on the patient shifting weight side to side and learning to take more weight through the weak leg. I also vary the height of the hi-lo mat to work on sit to stand from different heights. As the legs and core get stronger, one will be able to get up from a lower height.

A physical therapist should be able to help you with the techniques described above. I don’t know about equipment in the UK but hi-lo mats are standard equipment in a US therapy clinic.

One might could use a hospital bed or lift chair to achieve the same effect as a hi-lo mat, however, I haven’t tried this out. You should always check with your medical provider before attempting any exercises and also have a therapist or trained caregiver with you when attempting such exercises as described above.

Below is an examples of a hi-lo mat. One can purchase these mats, however, they are expensive.

Join in and write your own page! It’s easy to do. How? Simply click here to return to Stroke Rehabilitation Questions.

A frequent consequence of stroke is a limited hand function. Numerous studies have shown, that repetitive passive training enhances the rehabilitation process. As there are high anthropometric variances in hand and finger anatomy, this contribution presents a custom-made hand rehabilitation robot. The individual design is proposed to ensure an ergonomic interface which allows long-time wearing. To provide a cost-effective production, we present an automated design process. The individual fingers are manufactured monolithically using the selective laser sintering of polyamide. The presented device is portable and can be used for training as well as for grasping things.

Posted by Kostas Pantremenos in Caregivers, Video on November 26, 2019 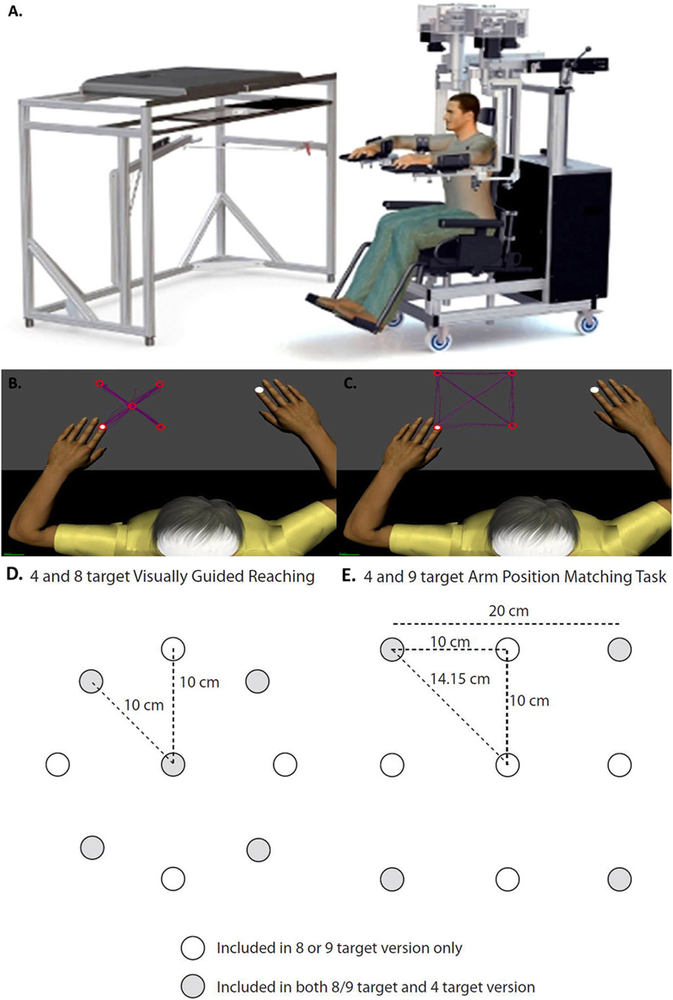 Motor impairment after stroke interferes with performance of everyday activities. Upper limb spasticity may further disrupt the movement patterns that enable optimal function; however, the specific features of these altered movement patterns, which differentiate individuals with and without spasticity, have not been fully identified. This study aimed to characterize the kinematic and proprioceptive deficits of individuals with upper limb spasticity after stroke using the Kinarm robotic exoskeleton.

Upper limb function was characterized using two tasks: Visually Guided Reaching, in which participants moved the limb from a central target to 1 of 4 or 1 of 8 outer targets when cued (measuring reaching function) and Arm Position Matching, in which participants moved the less-affected arm to mirror match the position of the affected arm (measuring proprioception), which was passively moved to 1 of 4 or 1 of 9 different positions. Comparisons were made between individuals with (n = 35) and without (n = 35) upper limb post-stroke spasticity.

Statistically significant differences in affected limb performance between groups were observed in reaching-specific measures characterizing movement time and movement speed, as well as an overall metric for the Visually Guided Reaching task. While both groups demonstrated deficits in proprioception compared to normative values, no differences were observed between groups. Modified Ashworth Scale score was significantly correlated with these same measures.

via Movement kinematics and proprioception in post-stroke spasticity: assessment using the Kinarm robotic exoskeleton – Researcher | An App For Academics

Posted by Kostas Pantremenos in Uncategorized on November 26, 2019

A Manifesto for being InCredible

The British Neuroscience Association (BNA) is officially launching its ‘Credibility in Neuroscience’ Manifesto today, Monday 25th November, at an evening reception at the House of Commons.

The manifesto has been published in response to current threats and challenges to credible research across life sciences. Currently, there is a huge pressure to publish as many papers as possible, with an emphasis on dramatic, novel findings. This in turn has led to increasing levels of non-reproducible research[i], which can skew scientific understanding, contribute to hyped expectations, and jeopardise the translation of research to real-world applications.[…]

Posted by Kostas Pantremenos in Pharmacological, REHABILITATION, Spasticity on November 25, 2019

Objective. To determine whether a single treatment with onabotulinumtoxinA injections combined with upper-limb physiotherapy improves grasp release compared with physiotherapy alone after stroke.

Conclusions. In this group of stroke patients with mild to moderate spastic hemiparesis, a single treatment with onabotulinumtoxinA did not augment the improvements seen in grasp release time after a standardized upper-limb physiotherapy program.

Posted by Kostas Pantremenos in Epilepsy, TBI on November 23, 2019

via Epileptic and Nonepileptic Seizures after Traumatic Brain Injury | SpringerLink

Stroke is the second largest cause of disability worldwide after dementia [1]. Temporary hemiparesis is common among stroke survivors. Regaining strength and movement in the affected side takes time and can be improved with the use of rehabilitation therapy involving repetitive and function-specific tasks [2]. Muscle atrophy is another common issue that occurs after a stroke due to lack of use of the muscle. For each day a patient is in hospital lying in bed with minimal activity approximately 13% of muscular strength is lost (Ellis. Liam, Jackson. Samuel, Liu. Cheng-Yueh, Molloy. Peter, Paterson. Kelsey, Lower Limb Exoskeleton Final Report, unpublished). Electromechanically actuated exoskeletons offer huge advantages in their ability to repetitively and precisely provide assistance/resistance to a user. However electromechanical actuators which provide the required forces are often heavy in weight and have high power requirements which limits portability. Furthermore, muscle atrophy can only be prevented by physically working the muscles either through the patient’s own volition or the use of Functional Electrical Stimulation (FES).

FES is the application of high frequency electrical pulses to the nerves or directly to the muscle belly in order to elicit contractions in the muscle. FES devices are typically lightweight and FES is well suited to reducing muscle atrophy in patients with no or extremely limited movement. The trade off to this is that precise control of FES is extremely difficult and controlling specific, repetitive, and functional movement is not easily accomplished. Furthermore, extended use of FES is limited by the introduction of muscle fatigue caused by the unnatural motor unit recruitment order [3]. The forces required for large movements, such as shoulder abduction, are too great to be provided by the use of FES which is much better suited to smaller movements such as finger extension [4, 5]. Some patients also find the use of FES painful. 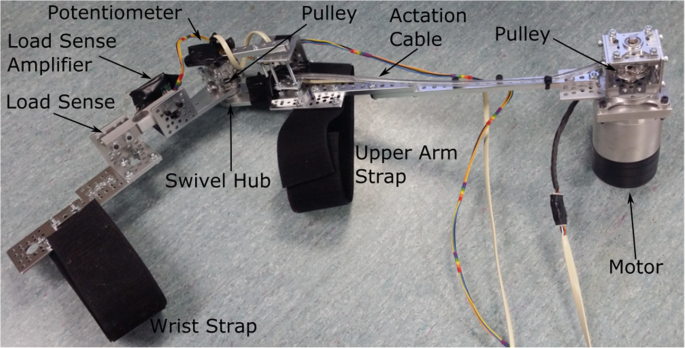 Rehabilitation is a relevant process for the recovery from dysfunctions and improves the realization of patient’s Activities of Daily Living (ADLs). Robotic systems are considered an important field within the development of physical rehabilitation, thus allowing the collection of several data, besides performing exercises with intensity and repeatedly. This paper addresses the use of a collaborative robot applied in the rehabilitation field to help the physiotherapy of upper limb of patients, specifically shoulder. To perform the movements with any patient the system must learn to behave to each of them. In this sense, the Reinforcement Learning (RL) algorithm makes the system robust and independent of the path of motion. To test this approach, it is proposed a simulation with a UR3 robot implemented in V-REP platform. The main control variable is the resistance force that the robot is able to do against the movement performed by the human arm.

via Using a Collaborative Robot to the Upper Limb Rehabilitation | SpringerLink