Walking deficits in people post-stroke are often multiple and idiosyncratic in nature. Limited patient and therapist resources necessitate prioritization of deficits such that some may be left unaddressed. More efficient delivery of therapy may alleviate this challenge. Here, we look to determine the utility of a novel principal component-based visual feedback system that targets multiple, patient-specific features of gait in people post-stroke.

Ten individuals with stroke received two sessions of visual feedback to attain a walking goal. This goal consisted of bilateral knee and hip joint angles of a typical ‘healthy’ walking pattern. The feedback system uses principal component analysis (PCA) to algorithmically weight each of the input features so that participants received one stream of performance feedback. In the first session, participants had to explore different patterns to achieve the goal, and in the second session they were informed of the goal walking pattern. Ten healthy, age-matched individuals received the same paradigm, but with a hemiparetic goal (i.e. to produce the pattern of an exemplar stroke participant). This was to distinguish the extent to which performance limitations in stroke were due neurological injury or the PCA based visual feedback itself.

Principal component-based visual feedback can differentially bias multiple features of walking toward a prescribed goal. On average, individuals with stroke typically improved performance via increased paretic knee and hip flexion, and did not perform better with explicit instruction. In contrast, healthy people performed better (i.e. could produce the desired exemplar stroke pattern) in both sessions, and were best with explicit instruction. Importantly, the feedback for stroke participants accommodated a heterogeneous set of walking deficits by individually weighting each feature based on baseline walking.

People with and without stroke are able to use this novel visual feedback to train multiple, specific features of gait. Important for stroke, the PCA feedback allowed for targeting of patient-specific deficits. This feedback is flexible to any feature of walking in any plane of movement, thus providing a potential tool for therapists to simultaneously target multiple aberrant features of gait.

Gait impairment following stroke often presents with multiple deficits. Some of the most common deficits include decreased paretic leg knee flexion during swing, hip circumduction, step length asymmetry, pelvic tilt, and decreased ankle dorsiflexion [1,2,3,4,5]. Unfortunately, resources (e.g. patient time/finances, therapist time, insurance coverage, etc), are limited, making it difficult to address all existing deficits in a single episode of care. Consequently, therapists are confronted with the challenge of using their clinical judgement to prioritize deficits, serially targeting those that they believe will most improve walking function and independence. Addressing one deficit in isolation of the others may introduce unintended compensations that further impair gait. Indeed, when manipulating a lower-limb movement pattern, lower-limb sagittal plane kinematics (e.g. hip/knee angles) are closely coupled [6,7,8].Thus, there remains a need for both the systematic prioritization of gait deficits and improvement in the efficiency of training so as to simultaneously address multiple patient-specific deficits.

Real-time visual feedback of gait kinematics has proven useful in altering targeted features of gait in healthy and neurological populations [9,10,11,12,13,14]. For example, Cherry-Allen et al. used visual feedback of joint angles to increase peak knee angle in people post-stroke [15]. Moreover, visual feedback has been effective in improving gait speed, stride length, and stride width in people post-stroke [16,17,18]. Still, research protocols using visual feedback of kinematic gait parameters have two prominent issues when looking to improve individual patient deficits: 1) they are focused on altering one feature of walking while leaving others unconstrained and 2) they are predicated on the assumption that the targeted parameter is the most prominent deficit for the entire group of patients included in the particular study. Given the heterogeneity of deficits following stroke, it would be most beneficial to have a system that can accommodate a wide array of walking patterns.

We developed a novel method to generate individualized, yet simple, visual feedback for re-training walking on a treadmill. An innovative element of this process is the use of principal component analysis (PCA) to display a simple ‘summary’ of a multi-dimensional movement pattern that continuously updates on a screen in front of participants as they walk. PCA has applied to motion data in a number of previous studies to characterize whole-body movement in both healthy [19, 20] and pathological populations [21,22,23,24,25]. The question that we ask here is whether this novel, PCA-based visual feedback system can address multiple, patient-specific deficits simultaneously. For stroke patients, we established a goal walking pattern that included four kinematic dimensions (bilateral hip and knee joint angles) of an average ‘healthy’ walking pattern. Each of the four kinematic dimensions was individually weighted based on a participant’s baseline deficits (defined as the difference between baseline walking and the goal walking pattern). Thus, weights varied across participants and were specific to their deficit.

The primary objective of this study was to evaluate the efficacy of our novel visual feedback in altering gait post-stroke. Thus, to contrast performance of participants with chronic stroke who received a control goal walking pattern (i.e. stroke-to-control), we evaluated the performance of healthy, age-matched controls who receive a hemiparetic goal walking pattern (i.e. control-to-stroke) using the same visual feedback. This contrast allows us to further validate our method by investigating the extent to which performance in stroke-to-control was limited by neurological injury compared to limitations imposed by the method itself. We hypothesized that participants in both groups would be able to use this summary visual feedback to simultaneously alter multiple aspects of their gait (albeit to varying extends depending on their impairment) toward the prescribed goal pattern while walking on a treadmill.

Participants with chronic stroke underwent clinical examination prior to the experiment. To quantify motor impairment we administered the lower extremity subscale of the Fugl-Meyer test (FM-LE) [26]. This test includes 17 items scored on an ordinal scale (0–2) with 34 possible points and higher scores representing less impairment. We measured self-selected and fastest comfortable over ground walking speeds by having participants walk two passes at each speed across a six-meter electronic walkway (Zeno Walkway, ProtoKinetics, Havertown, PA). Baseline knee and hip flexion angles, used to determine study eligibility, were measured using motion capture while participants walked on the treadmill at their self-selected speed. Participants who customarily wore an ankle-foot orthosis continued using these items throughout the study.

We also tested for sensory impairment in participants with chronic stroke. For proprioception testing, participants were supine with their eyes closed. The examiner stabilized the proximal joint segment and passively moved the distal segment to a position above or below the neutral starting position (neutral position was midway through the joint’s range of motion). The participant reported whether the position of the specified joint was above or below the starting position. Paretic hip, knee, and ankle joints were each tested at six different positions (18 total probes). Participants with stroke also completed The Star Cancellation Test, a screening tool that detects the presence of unilateral spatial neglect [27]. Scores less than 44/54 stars cancelled is suggestive of unilateral spatial neglect.

We recorded participants’ kinematics using an Optotrak Certus motion capture system (Northern Digital, Waterloo, ON) as they walked on a split-belt treadmill (Woodway, Waukesha, WI) with a separate belt for each leg. This type of treadmill allowed us to detect right and left foot contacts via distinct force plates under each belt, but the belt speeds were equal throughout all experiments. Kinematic data were collected at 100 Hz from 12 infrared-emitting diodes placed bilaterally on the foot (fifth metatarsal head), ankle (lateral malleolus), knee (lateral epicondyle), hip (greater trochanter), pelvis (iliac crest), and shoulder (acromion process; Fig. 1a). 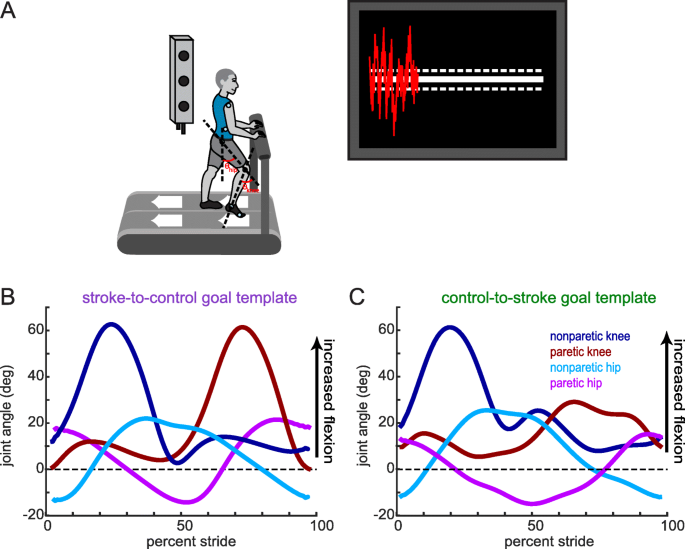 This entry was posted on December 27, 2019, 19:34 and is filed under Gait Rehabilitation - Foot Drop, REHABILITATION. You can follow any responses to this entry through RSS 2.0. You can leave a response, or trackback from your own site.