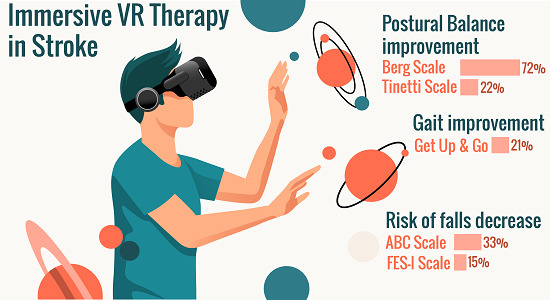 Stroke is a neurologic disorder considered the first cause of disability worldwide due to motor, cognitive, and sensorial sequels. Balance dysfunctions in stroke survivors increase the risk of falls and physiotherapeutic rehabilitation is essential to reduce it. Virtual reality (VR) seems to be an alternative to conventional physiotherapy (CT), providing virtual environments and multisensorial inputs to train balance in stroke patients. The aim of this study was to assess if immersive VR treatment is more effective than CT to improve balance after stroke. This study got the approval from the Ethics Committee of the University of Almeria. Three chronic ischemic stroke patients were selected. One patient who received 25 sessions of immersive VR intervention for two months was compared with another patient who received equivalent CT and a third patient with no intervention. Balance, gait, risk of falling, and vestibular and visual implications in the equilibrium were assessed. After the interventions, the two patients receiving any of the treatments showed an improvement in balance compared to the untreated patient. In comparison to CT, our results suggest a higher effect of immersive VR in the improvement of balance and a reduction of falls risk due to the active upright work during the VR intervention.

Stroke is considered the first cause of disability [1] and the third cause of death in westernized countries after cardiovascular diseases and cancer [2]. Stroke is a central nervous system disorder produced by a local interruption of the cerebral blood flow due to the occlusion (ischemic stroke) or rupture (hemorrhagic stroke) of a cerebral blood vessel [3]. As result of brain cortex injury, afferent and efferent neural pathways are affected, and motor, sensitive and cognitive functions become impaired. Motor and cognitive impairments observed in post-stroke patients reduce their functional capacity, their personal autonomy [4], and social abilities, which results in intensive care and rehabilitation needs with the subsequent economic burden to society and families [5].
Postural instability or poor balance is a relevant central vestibular symptom in neurologic disorders, such as stroke [6], in which approximately 83% of stroke survivors show balance impairments [7]. Proprioceptive visual and vestibular inputs to the central nervous system are essential to guarantee the upright position [8]. Thus, errors in the central integration of this postural information can induce gait difficulties with the subsequent increase in risk of falls [9]. In addition, stroke survivors show a number of neurological issues like visual neglect, sensory loss, reduced muscle strength and spasticity, which also increase the risk of fall 1.5–2 times more in post-stroke patients than older adults without brain damage [10]. This results in fractures, tissue injuries, immobility, and psychological fear of falling as additional consequences of falls in stroke patients [11]. Besides, large hospitalization periods due to injury falls are devastating for patient recovery [12].
The use of virtual reality (VR) has been booming during the last decade, becoming a potential tool in the field of stroke rehabilitation [13]. Virtual reality technology works by displaying a set of digital images that allow the user interacts with a virtual environment or situation that is perceived equivalent to the real physical world [14]. VR has been used in neurorehabilitation in order to encourage a higher number of exercise repetitions and their intensity, and enhances motor learning thanks to the quick feedback possibilities and the multisensorial stimulation [15]. This promotes neuronal plasticity, which would the responsible of VR-induced benefits in stroke rehabilitation [16]. Recent studies have shown that immersive VR protocols in a sitting position and Wii exergames (non-immersive VR) improve motor function, balance, and gait in stroke patients in comparison with conventional therapy (CT) [17]. However, other studies report no statistical differences when comparing immersive or non-immersive VR in a sitting position with CT [18,19]. Moreover, several studies suggest that a neurorehabilitation program combining VR and CT produces a greater improvement than each treatment separately [20].
Nevertheless, the majority of published works have used non-immersive VR therapies, such as Wii exergames for balance training [21,22]. Recently, improved versions of immersive VR have become available for clinical and research purposes in physical rehabilitation. Thus, immersive VR, thanks to the use of headsets that display 3D digital images that simulate any scenario with high realism, has the capability to make individuals feel as if they’re inside the virtual environment. Moreover, the use of hand-held controllers allows users to interact with virtual elements using their hands as they do real life, allowing exercise repetition, intensity variation, and task-oriented training. Thus, immersive VR postulates as a promising tool for the rehabilitation of motivated stroke patients. The aim of this study is to assess if an experimental protocol based on immersive VR therapy is valid for stroke rehabilitation and produces positive effects in balance and falls risk in comparisons to a CT protocol. For such a reason, two intervention protocols (immersive VR or CT) in comparison with the absence of treatment were tested in three patients diagnosed with ischemic stroke[…]

This entry was posted on May 17, 2020, 21:36 and is filed under Gait Rehabilitation - Foot Drop, REHABILITATION, Virtual reality rehabilitation. You can follow any responses to this entry through RSS 2.0. You can leave a response, or trackback from your own site.