Stroke has a debilitating effect on the human body and a serious negative effect on society, with a global incidence of one in every six people. According to the World Health Organization, 15 million people suffer stroke worldwide each year. Of these, 5 million die and another 5 million are permanently disabled. Motor and cognitive deficits like hemiparesis, paralysis, chronic pain, and psychomotor and behavioral symptoms can persist long term and prevent the patient from fully reintegrating into society, therefore continuing to add to the costly healthcare burden of stroke. Regenerative medicine using stem cells seems to be a panacea for sequelae after stroke. Stem cell-based therapy aids neuro-regeneration and neuroprotection for neurological recovery in patients. However, the use of stem cells as a therapy in stroke patients still needs a lot of research at both basic and translational levels. As well as the mode of action of stem cells in reversing the symptoms not being clear, there are several clinical parameters that need to be addressed before establishing stem cell therapy in stroke, such as the type of stem cells to be administered, the number of stem cells, the timing of dosage, whether dose-boosters are required, the route of administration, etc. There are upcoming prospects of cell-free therapy also by using exosomes derived from stem cells. There are several ongoing pre-clinical studies aiming to answer these questions. Despite still being in the development stage, stem cell therapy holds great potential for neurological rehabilitation in patients suffering from stroke.

Stroke is one of the leading causes of chronic disability and mortality, with 102 million disability-adjusted life years lost annually (Steven, 2008). The Global Burden of Disease, Injuries, and Risk Factors Study (GBD 2015) reported a shift from communicable diseases toward non-communicable diseases like cerebrovascular events. While the incidence of stroke is decreasing in the developed world, it has peaked in low- and middle-income countries like India due to demographic transition and rapid shifts in the socioeconomic milieu (Thomson, 1998). The estimated adjusted prevalence rate of stroke is reported to have a range of 84–262/100,000 in rural and 334–424/100,000 in urban India (Wichterle et al., 2002; Nagai et al., 2010).

The only neuroprotective agent developed for stroke in clinical use is recombinant tissue plasminogen activator (rtPA), which is employed for thrombolysis and has a therapeutic window of merely 3–4.5 h. There is thus a compelling need to develop therapeutic agents that extend beyond the first few hours after onset of stroke. This requires a paradigm shift to the usage of new strategies from neuroprotection to neuro-restoration that treat the injured or compromised brain tissue.

The majority of stroke survivors are left with some degree of disability, particularly upper limb dysfunction, despite several neurorehabilitation therapies. Physical therapy incorporating exercises, motor learning principles, motor cortex stimulation (using rTMS, TDCS), and assistive technologies aid the restoration of functional movements (Tae-Hoon and Yoon-Seok, 2012). The emergence of regenerative medicine has fueled interest across readers and clinicians to study its potential. Over the last decade, an enormous amount of work has been done exploring the potential of a variety of cells like adult stem cells, umbilical cord blood, and cells from adipose tissue and skin.

The recovery after stroke has been explained as a rich cascade of events encompassing cellular, molecular, genetic, demographic, and behavioral components. Such factors have been proven as covariates in therapeutic trials of restorative agents with a sound neurobiological basis. Advances in functional neuroimaging and brain mapping methods have provided a valuable parallel system of data collection for stroke recovery in humans. The recovery in a stroke-affected individual will largely depend on the size of lesion, the internal milieu of the brain injury, and the age and comorbid status of the patient. In general, the first epoch encompasses the initial hours after a stroke, when rapid change occurs in blood flow, edema, pro-inflammatory mechanisms. A second epoch is related to spontaneous behavioral recovery, which begins a few days after stroke onset and lasts several weeks. During this epoch, the brain is galvanized to initiate repair, as endogenous repair-related events reaching peak levels, suggesting a golden period for initiating exogenous restorative therapies. A third epoch begins weeks to months after stroke, when spontaneous behavioral gains have generally reached a plateau, and this stable state is responsive to many restorative interventions (Steven, 2008).

Mechanisms of Action of Stem Cells in Neural Repair

Stem cells have the capacity to differentiate into all types of cells. Exogenously administered cells appear to stimulate endogenous reparative processes and do not replace injured cerebral tissue. It was once thought that intravenously administered cells would home in on the injured site and replace the dead neurons, but the current ideology for the use of these cells holds that these cells release many trophic factors like VEGF, IGF, BDNF, and tissue growth factors that stimulate brain plasticity and recovery mechanisms. Upregulation of growth factors, prevention of ongoing cell death, and enhancement of synaptic connectivity between the host and graft are some of the common pathways through which intravenous stem cells work as “chaperones.” Regarding the timing of transplantation, preclinical studies have shown that cell therapy increases functional recovery after acute, sub-acute, and chronic stroke (Bliss et al., 2010), but few studies have compared different time windows, with differing results according to the model system and cell type studied. All of the possible modes of action of stem cells have been described in Figure 1. 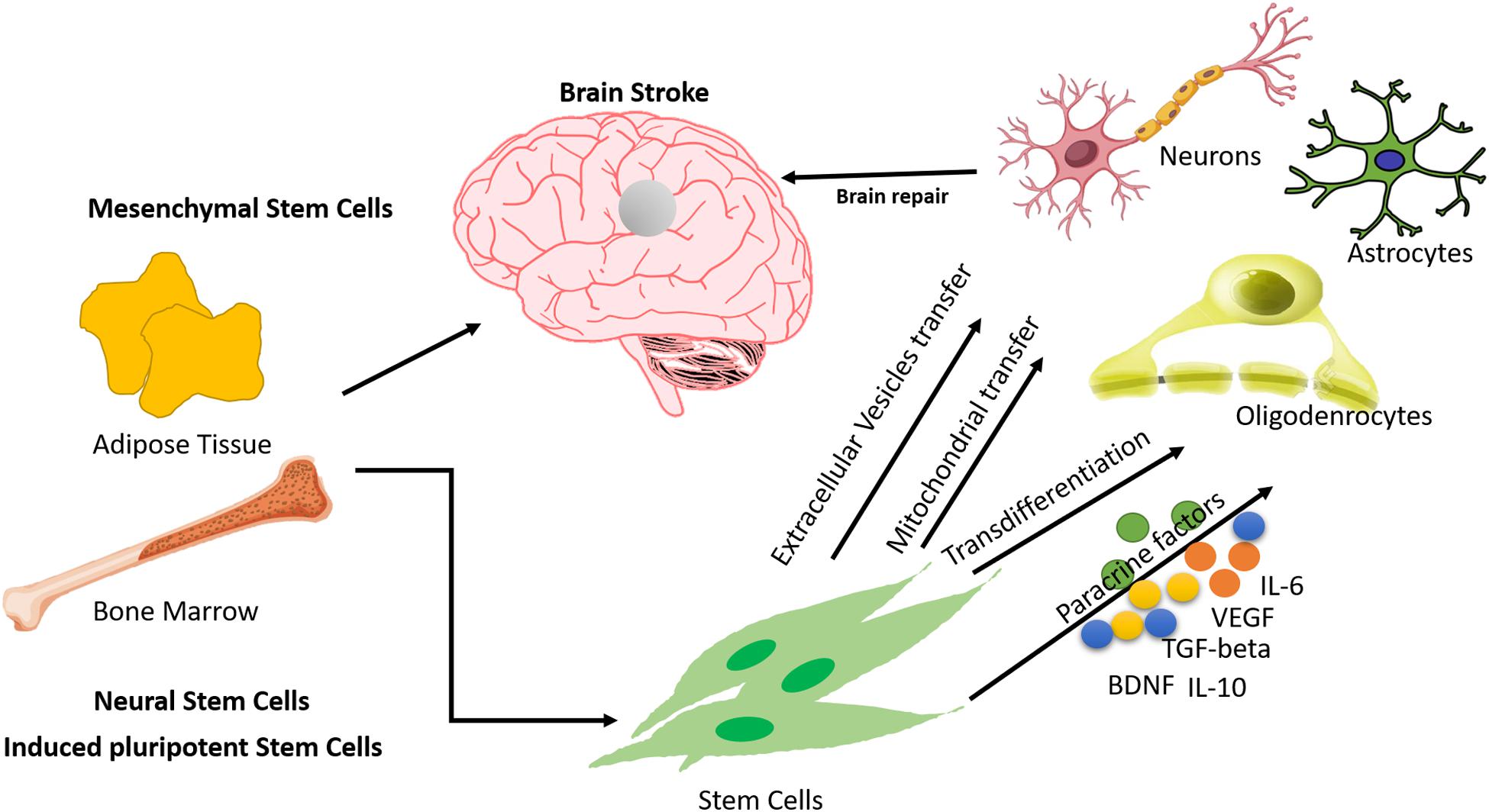 This entry was posted on July 10, 2020, 19:31 and is filed under REHABILITATION. You can follow any responses to this entry through RSS 2.0. You can leave a response, or trackback from your own site.