Few portable exoskeletons following the assist-as-needed concept have been developed for patients with neurological disorders. Thus, the main objectives of this proof-of-concept study were 1) to explore the safety and feasibility of an exoskeleton for gait rehabilitation in stroke and multiple sclerosis patients, 2) to test different algorithms for gait assistance and measure the resulting gait changes and 3) to evaluate the user’s perception of the device.

A cross-sectional study was conducted. Five patients were recruited (4 patients with stroke and 1 with multiple sclerosis). A robotic, one-degree-of-freedom, portable lower limb exoskeleton known as the Marsi Active Knee (MAK) was designed. Three control modes (the Zero Force Control mode, Mode 1 and Mode 3) were implemented. Spatiotemporal gait parameters were measured by the 10-m walking test (10MWT), the Gait Assessment and Intervention Tool (G.A.I.T.) and Tinetti Performance Oriented Mobility Assessment (gait subscale) before and after the trials. A modified QUEST 2.0 questionnaire was administered to determine each participant’s opinion about the exoskeleton. The data acquired by the MAK sensors were normalized to a gait cycle, and adverse effects were recorded.

The MAK exoskeleton was used successfully without any adverse effects. Better outcomes were obtained in the 10MWT and G.A.I.T. when Mode 3 was applied compared with not wearing the device at all. In 2 participants, Mode 3 worsened the results. Additionally, Mode 3 seemed to improve the 10MWT and G.A.I.T. outcomes to a greater extent than Mode 1. The overall score for the user perception of the device was 2.8 ± 0.4 95% CI.

The MAK exoskeleton seems to afford positive preliminary results regarding safety, feasibility, and user acceptance. The efficacy of the MAK should be studied in future studies, and more advanced improvements in safety must be implemented.

Neurological diseases cause functional disturbances, including gait disabilities, that affect patients’ ability to perform activities of daily living [1]. Between 50 and 60% of patients with stroke still have some degree of motor impairment after a conventional rehabilitation period [5]. In multiple sclerosis (MS) patients, gait impairment is a major contributor to social, personal and economic burdens [6]. Thus, gait impairment is one of the main problems in patients with stroke or MS [7, 8].

To the best of our knowledge, few portable exoskeletons that are lightweight and have the capability to execute or modify gait assistance algorithms have been developed, and a high degree of customization can be allowed by following the assist-as-needed concept [25] for gait assistance in stroke and MS patients. The exoskeleton evaluated in this study is a single-limb exoskeleton with actuation at the knee level (Fig. 1). Thus, the main objectives of this study were 1) to explore the safety and feasibility of the exoskeleton developed by the research team for gait rehabilitation in stroke and MS patients as a proof of concept, 2) to test different algorithms for gait assistance and measure the resulting gait changes and 3) to evaluate the user’s perception of the device. 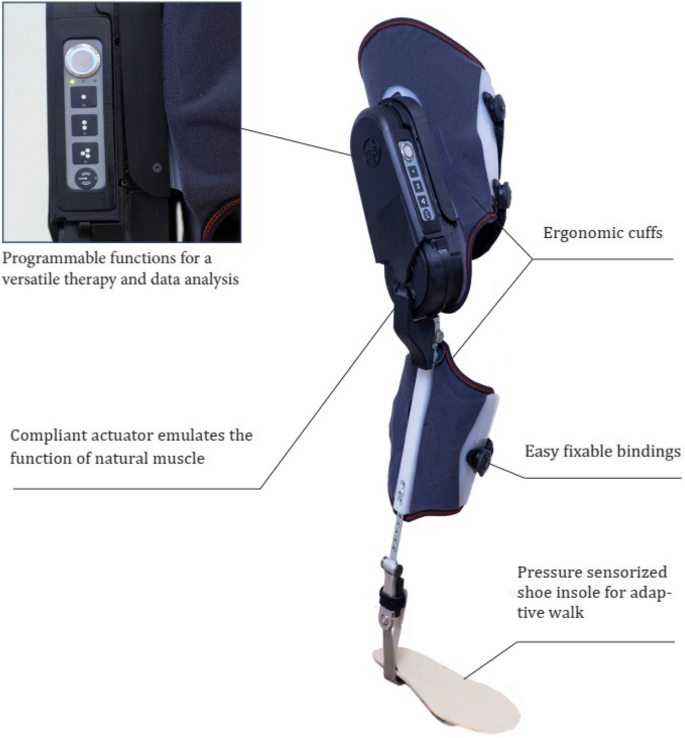 This entry was posted on July 11, 2020, 23:16 and is filed under Gait Rehabilitation - Foot Drop, REHABILITATION, Rehabilitation robotics. You can follow any responses to this entry through RSS 2.0. You can leave a response, or trackback from your own site.