[ARTICLE] Walking with a powered ankle-foot orthosis: the effects of actuation timing and stiffness level on healthy users – Full Text

In the last decades, several powered ankle-foot orthoses have been developed to assist the ankle joint of their users during walking. Recent studies have shown that the effects of the assistance provided by powered ankle-foot orthoses depend on the assistive profile. In compliant actuators, the stiffness level influences the actuator’s performance. However, the effects of this parameter on the users has not been yet evaluated. The goal of this study is to assess the effects of the assistance provided by a variable stiffness ankle actuator on healthy young users. More specifically, the effect of different onset times of the push-off torque and different actuator’s stiffness levels has been investigated.

This study presents a first attempt to show that, together with the assistive torque profile, also the stiffness level of a compliant ankle actuator can influence the assistive performance of a powered ankle-foot orthosis.

Powered ankle-foot orthoses (PAFOs) are robotic devices meant to assist the ankle joint of their users. Recently, several PAFOs have been developed and tested to investigate their potential in reducing the biological effort of healthy users during assisted walking as compared to unassisted or normal walking [1–5], but also to evaluate their performance when used as assistive or rehabilitation devices with weakened users such as the elderly [6, 7] and impaired subjects [8–10]. In these studies, PAFOs where shown to be able to reduce the metabolic cost of walking of healthy users as compared to the unassisted configuration [1, 5, 11], and in some cases also as compared to walking without the device [3, 4]. Furthermore, studies with impaired subjects showed the advantages of using a PAFO to improve the impaired ankle kinematics, to increase the walking speed of the assisted subject, and to improve the gait symmetry [8, 9, 12, 13]. Despite the promising results obtained by these studies, when comparing the performance of different PAFOs in achieving similar goals, differences exist in the outcomes of these experiments. As reported in [13], some studies have assessed the time needed by the users to adapt to the assistance provided by PAFOs. Although, several of these studies have shown that, over different identical sessions, the subjects reached a steady state increasingly faster [5, 11, 14–17], the resulting adaptation times differ between studies. In addition to this, different studies found divergent outcomes regarding the capabilities of PAFOs in reducing the metabolic cost and muscle activation of healthy users during powered walking [11, 14, 18–20]. The divergences come from the influence that some parameters of the assistive profile provided by the PAFO have on the user [1, 3, 13, 21, 22]. Recently, several research groups have evaluated the effects of two of these assistive parameters, which are the push-off onset time [1, 3, 21, 23] and the plantarflexion assistance magnitude [1, 22, 24, 25]. Specifically, these studies assessed the effect that different values of these parameters have on the biological effort of healthy users during walking. The results of these studies were analyzed and compared in [13]. This work underlined that the optimal onset timing to minimize the metabolic cost of walking is not consistent between studies [1, 3, 21]. However, similar trends were found in different studies for which the optimal onset timing for the reduction of the soleus activation was earlier than the optimal onset timing for the reduction of the metabolic cost of walking [1, 21]. Different studies found that the reduction of the soleus activation is obtained with a bigger positive assistance magnitude, while a medium level of assistance magnitude is more beneficial to reduce the metabolic cost of walking [1, 22]. However, these findings are not compatible with the results obtained in [5, 20, 26]. Some studies tried to define some formulae predicting the performance of the assistance provided by the PAFOs on their users based on the assistive parameters [1, 4]. However, as highlighted in [13], the determination of this formula is not straightforward due to the mutual influence of different parameters and to the fact that the results can be influenced by the different actuation setups and different protocols used in different studies.

In the field of wearable robots, there is a shift towards the use of compliant actuators as actuation principles. Among them, variable stiffness actuators (VSAs) have been shown to be able to minimize large forces due to shocks, to be energy-efficient by storing and releasing energy, and to be robust to external perturbations or unpredictable model errors [27–29]. Despite the well-recognized benefits of VSAs, their employment in wearable robots is still limited due to their design complexity, the increased weight, and the challenging control strategies needed [30]. Among the developed VSAs, the MACCEPA has been already implemented in wearable robots such as lower limbs exoskeletons [31–33] and powered knee [34–36] and ankle orthoses [37–39].

This study evaluates the effects of a MACCEPA-actuated unilateral PAFO, named MAPO (Maccepa Ankle Powered Orthosis) on the walking performance of healthy young users. More specifically, the goal of this study is to evaluate the specific effects of different assistive parameters on the biological effort (i.e., metabolic cost of walking and lower limbs muscle activation) and walking pattern (i.e., lower limbs kinematics and gait parameters) of healthy users. As previously introduced, one of the assistance parameters influencing the PAFO’s assistive performance on the user is the onset timing of the powered push-off. For this reason, the effects of this assistance parameter are investigated with subjects walking with the MAPO. The second parameter investigated in this study is the actuator’s stiffness level. The influence of this parameter on the actuator’s performance has been already shown in several test-bench experiments [37, 40]. In [37] it was shown that no single stiffness level of the ankle actuator used in the MAPO could be defined as optimal based on the actuator’s torque tracking performance, due to the dependence of the benefits of a specific actuator’s stiffness level on both the assistive torque reference and the user’s ankle kinematics. However, the effect of the actuator’s stiffness level on the users has not been yet studied. Thus, a goal of this study is to assess whether the actuator’s stiffness has an influence on the walking performance of healthy users. As previously mentioned, the results of previous studies with bilateral PAFOs [1, 21] showed that the push-off onset time has an influence on the biological effort of healthy users. For this reason, the onset timing of the assistance provided by the MAPO is expected to have an influence on the biological effort of the users. Nevertheless, an additional goal of this study is to evaluate whether similar trends to the ones obtained in [1, 21] can be seen when walking with a unilateral PAFO.

The PAFO used during the experiments is called MAPO and it is shown in Fig. 1. The design and characterization of the MACCEPA-based ankle actuator implemented in the MAPO have been already presented in detail in [37, 38]. Briefly, the ankle VSA is used to actuate the MAPO in both directions of the sagittal plane (Additional file 1). The actuator’s stiffness level can be changed by modifying the pre-compression (P) of its spring. P is indicated as a percentage of the working length of the spring (spring constant 68.7kN/m, natural length 0.051m, maximal travel of work 0.019m [38]). A level of P equal to 0% indicates that the spring at the actuator’s equilibrium position is uncompressed, while P equal to 100% indicates that the spring is completely compressed at the actuator’s equilibrium position. Thus, the actuator’s behavior is more compliant for lower levels of the spring pre-compression (P). It should be noted that the actuator’s stiffness is not the output stiffness, because the actuator characteristics are not defined as a function of the actuator’s output angle (i.e. the angle between the shank and the foot link), as reported in the Additional file 1 and in [36, 38]. 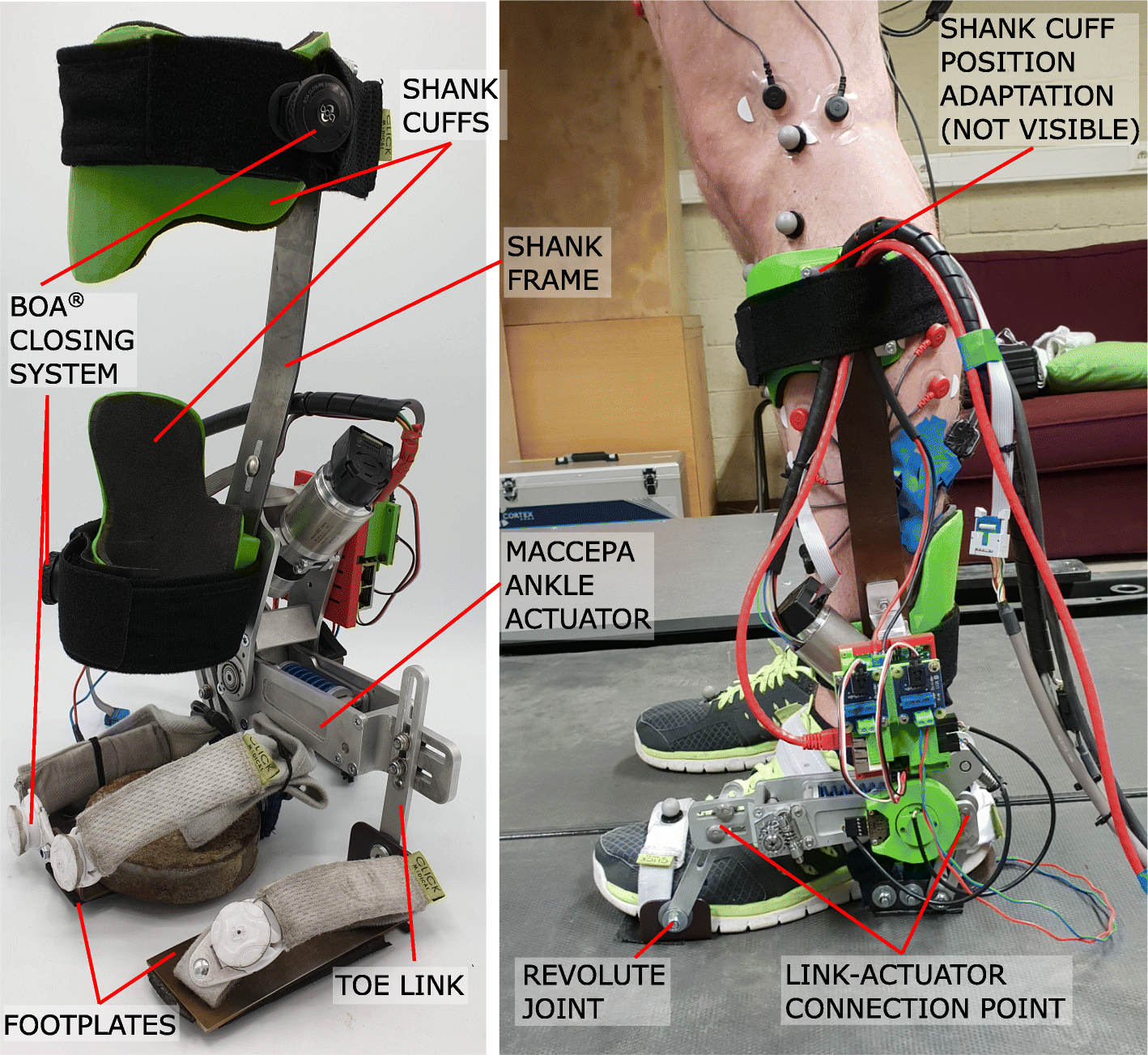 MACCEPA Ankle Powered Orthosis (MAPO). The shank cuffs and the footplates are attached to the user by means of a BOAⓇ closing system. This system allows obtaining a firm connection with a continuous range of adaptability. To provide a more natural walking pattern, the heel plate is slightly bent at the heel, allowing the foot to roll on the ground in the initial phase of the gait cycle. Furthermore, the toe plate is connected to the toe link by means of a revolute joint, which allows the user to rotate about the metatarsophalangeal joint at the end of the stance phase

Continue —-> Walking with a powered ankle-foot orthosis: the effects of actuation timing and stiffness level on healthy users | Journal of NeuroEngineering and Rehabilitation | Full Text

This entry was posted on August 9, 2020, 20:53 and is filed under Gait Rehabilitation - Foot Drop, REHABILITATION, Rehabilitation robotics. You can follow any responses to this entry through RSS 2.0. You can leave a response, or trackback from your own site.