[BLOG POST] Wearable elbow robot in rehabilitation after a stroke

1 The burden of stroke

2 Possibilities of recovery after a stroke

5 The functionality of the elbow robot

6 The advantages of robotic training

7 Future of the robotic elbow device in rehabilitation

The burden of stroke

What is the role of wearable elbow robots in rehabilitation after a stroke? Acute stroke, also known as a cerebrovascular accident, represents the acute onset of a focal neurological deficit due to an impairment in a specific vascular territory. Annually, approximately 800.000 new cases are reported only in the United States; in other words, there is a new case every 40 seconds, and death occurs every 4 minutes. Therefore, stroke remains one of the most important causes of mortality and disability worldwide and a significant public health issue [1, 2].

There are two main types of stroke: ischemic stroke (see Figure 1 for Trial of Org 10172 in Acute Stroke Treatment (TOAST) classification) -accounting for 85% of acute cerebrovascular events- and hemorrhagic. Ischemic stroke is due to the interruption of blood flow in a particular brain territory, while a rupture of a blood vessel supplying the brain leads to a hemorrhage [1]. Hemorrhagic strokes are broadly due to intracerebral hemorrhage or subarachnoid hemorrhage [2].

The categories of ischemic stroke are showcased in Figure 1 below  [2]. 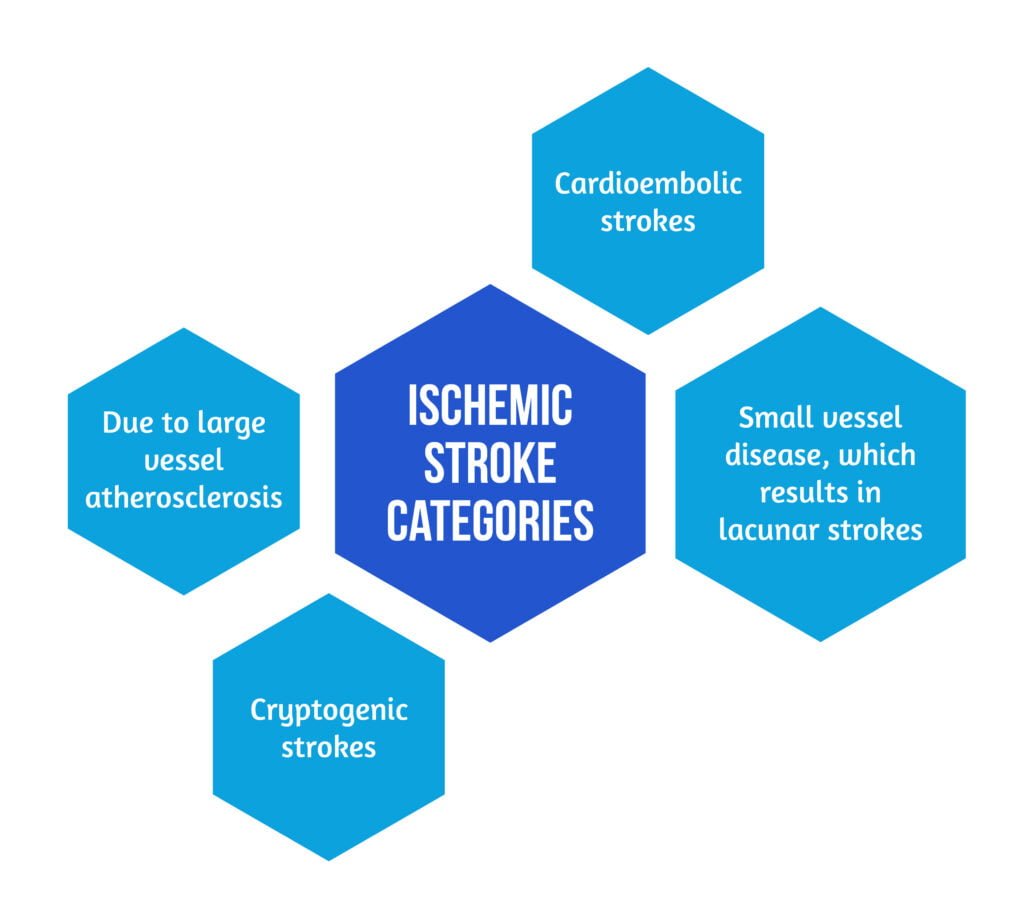 A vast etiology can lead to a cerebrovascular attack; the most common risk factors are presented in Figure 2  below. 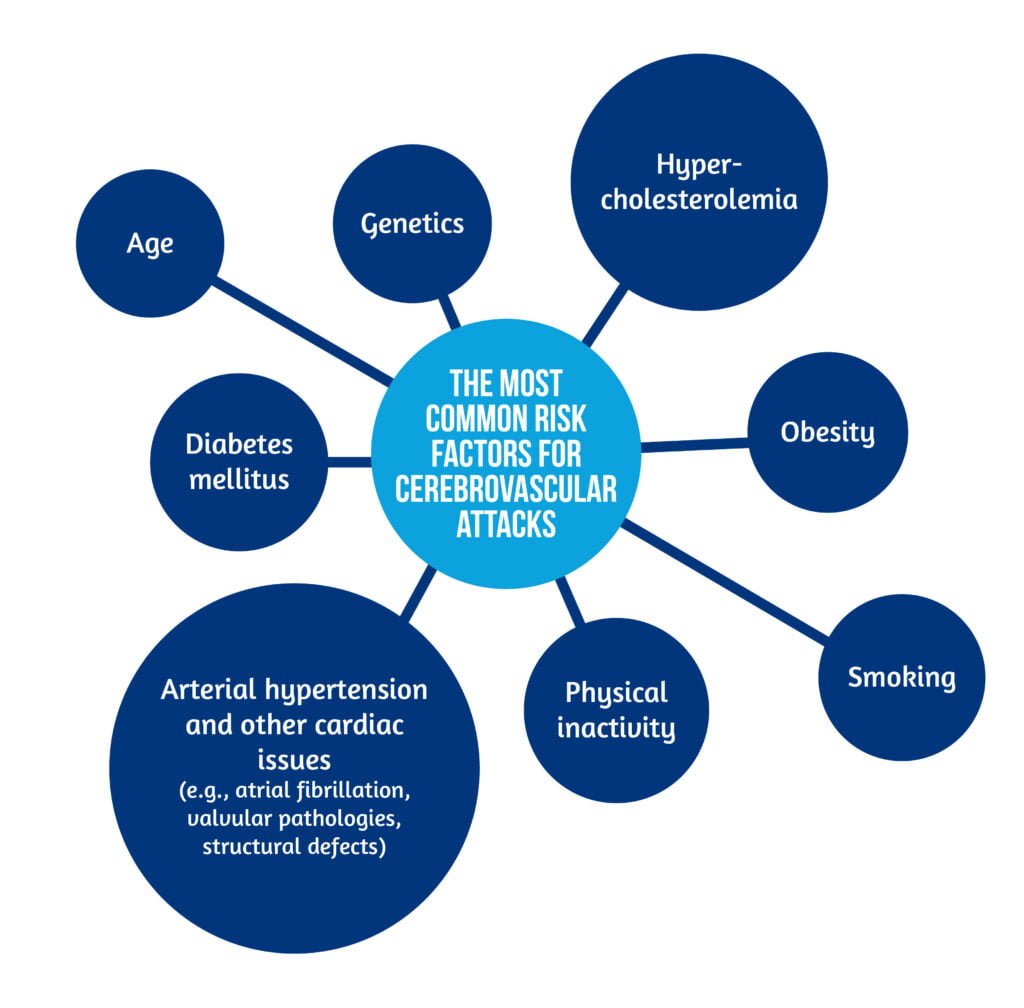 When discussing the consequences of stroke, it is estimated that approximately 70% of the patients who survive a stroke will suffer from hemiparesis affecting the upper limbs, but most of the patients will remain with a type of neurological impairment. In addition, two-thirds of post-stroke patients will also experience a considerable impairment in upper limb motor function. As a result, stroke limits the ability to perform daily activities ( See Figure 3).

Possibilities of recovery after a stroke

One of the main goals of stroke rehabilitation is to improve upper limb motor function to reduce disability and enhance the overall quality of life. The most crucial part of long-term recovery was reported in the first three months when spontaneous recovery and learning-dependent processes were dominant. However, scientific data suggests rehabilitation should not be limited only to this period. Unfortunately, several studies have demonstrated that hospitalized patients were inactive most of the day in the ward. The time estimated for physical and occupational therapy was limited to approximately three hours per day. Active and passive kinesiotherapy duration was about 30 minutes, while median repetition was 33-50 or even less for patients with severe deficits. Despite these aspects, it has been recognized that the most effective way to increase neuroplasticity and motor recovery after a cerebrovascular attack is through intensive treatments and repetitive motor tasks [3].

Over the past years, rehabilitation robots have gained popularity in specific stroke rehabilitation since they have shown the capability to increase and individualize the number of movement repetitions compared to classic kinesiotherapy. These advantages can offer clinicians the possibility to adapt the recovery programs according to every patient’s needs and better chances of achieving the desired goals. Even though almost every patient with motor impairments should be considered for this type of rehabilitation, recent studies proved that chronic stroke patients with moderate deficits showed better improvements in motor function from robotic-assisted upper limb training than those with mild impairments. Therefore, the stratification of stroke patients based on their motor deficits was essential to obtain the best individual outcomes. Since the elbow joint is the most common and highly affected after a stroke, the 2021 study of Huang MZ et al. highlights the development of a portable exoskeleton robot targeting upper limb neurorehabilitation with a focus on flexion/extension of the elbow [3].

As such, the study was bidirectional, i.e., it was meant to:

The study included 11 patients (mean age 50 years) with early subacute stroke (7 days to 3 months) and late subacute stroke (3 to 6 months) who followed the eligibility criteria presented in Figure 4 below [3]. 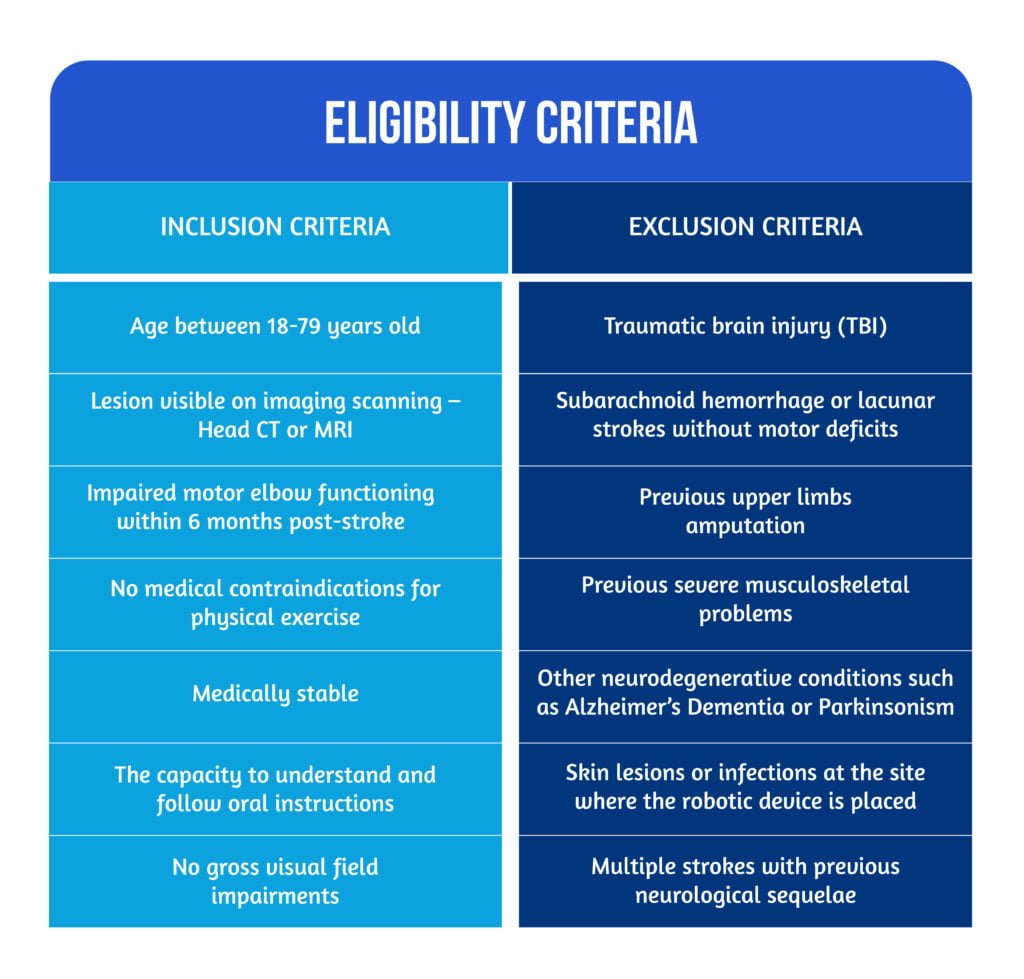 The exoskeleton consisted of the upper arm and forearm braces, a servomotor, a gear head, and a computer screen for visual feedback. The wearable robot was designed to supply passive stretching, game-based active movement, and assessment of biomechanical properties such as muscle strength and elbow range of motion [3], as seen in Figure 5. 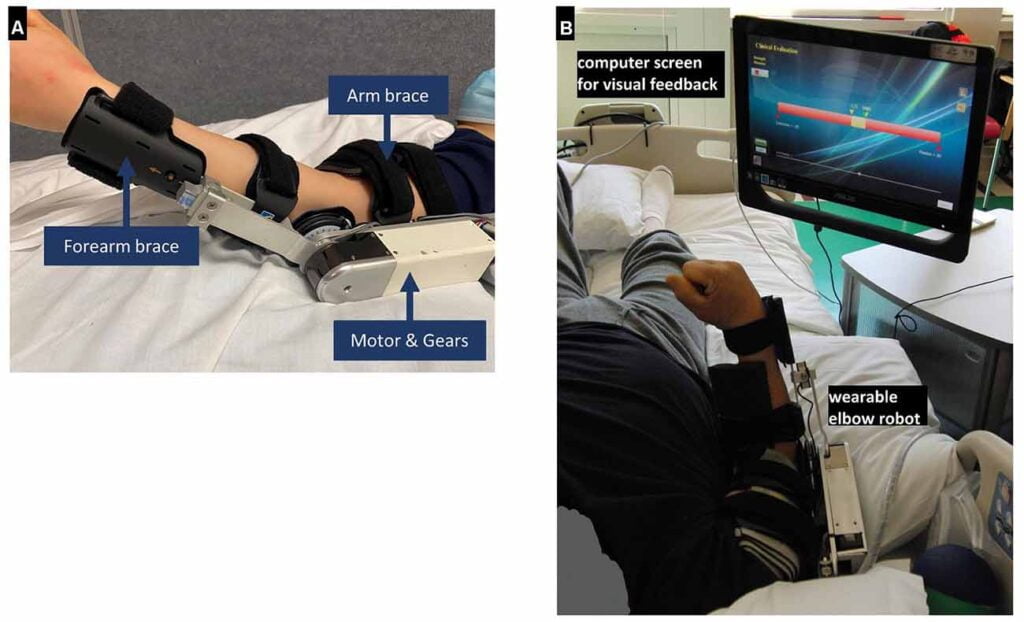 The functionality of the elbow robot

While lying on their back, patients wore the robot on the impaired upper limb with the shoulder at about 30 degrees flexion and 15-degree abduction. The device was mounted with one brace aligned to the elbow flexion axis and the output axis (Figure 5 – A), while the computer monitor was placed in front of the patient and adjusted as needed (Figure 5 – B) [3].

Each session consisted of passive stretching of the elbow (15 minutes), assisted active training through movement gameplay (15 minutes), and passive cool-down stretching (15 minutes). Elbow active range of motion (ROM) and maximum isometric voluntary contraction (MVC) of elbow flexors and extensor muscles were measured before and after each session. The training protocol was adapted to every patient’s needs. Patients benefited from four sessions per week during approximately a month of hospitalization, resulting in around 15 sessions [3].

Clinical outcome results such as upper limb motor recovery, spasticity, and muscle strength were followed in all patients before and after robotic training and 4 weeks after completion. In addition, parameters such as the Fugl-Meyer Assessment of the upper extremity, the Motricity Index, and the Modified Ashworth Scale were used to evaluate the progress [3].

Some minor adverse effects were reported, such as:

Regarding the flexor muscle group, stroke survivors with severe upper limb disability had a lower initial performance value than the subjects with moderate motor deficits. By comparison, the post-session improvement rate was more prominent in the group of patients with severe motor impairment [3].

The advantages of robotic training

The in-bed rehabilitation robotic device and training developed by Huang et al. [3] was found feasible for both early and late subacute stroke survivors. The superior aspects of the robotic device in contrast to conventional therapy are presented in Figure 6 below.

Figure 6. The superior aspects of the in-bed rehabilitation robot

Their [3] findings highlighted that applying in-bed rehabilitation robotic training in the subacute stroke stage is beneficial for motor recovery and is a patient-centered procedure.

Future of the robotic elbow device in rehabilitation

Considering the presented study by Huang et al. [3], it should be acknowledged that the use of such robotic elbow devices in patients with increased upper limb spasticity will help with the implementation of different clinical variables to evaluate muscle tone, synergistic movements, and active isolated movement in everyday practice in a more significant number of stroke survivors while enhancing a detailed analysis of the interferences between conventional rehabilitation and robotic procedures.

The effectiveness of intense neurorehabilitation of the upper limb after stroke

The Effectiveness of Robotic-Assisted Therapy in stroke rehabilitation

The positive effect of cognitive rehabilitation in early ischemic stroke

This entry was posted on December 14, 2022, 19:43 and is filed under Paretic Hand, Rehabilitation robotics. You can follow any responses to this entry through RSS 2.0. You can leave a response, or trackback from your own site.