Posted by Kostas Pantremenos in Neuroplasticity, Tele/Home Rehabilitation on March 19, 2019

After discharge from hospital following a stroke, prescriptions of community-based rehabilitation are often downgraded to “maintenance” rehabilitation or discontinued. This classic therapeutic behavior stems from persistent confusion between lesion-induced plasticity, which lasts for the first 6 months essentially, and behavior-induced plasticity, of indefinite duration, through which intense rehabilitation might remain effective. This prospective, randomized, multicenter, single-blind study in subjects with chronic stroke-induced hemiparesis evaluates changes in active function with a Guided Self-rehabilitation Contract vs conventional therapy alone, pursued for a year.

One hundred and twenty four adult subjects with chronic hemiparesis (> 1 year since first stroke) will be included in six tertiary rehabilitation centers. For each patient, two treatments will be compared over a 1-year period, preceded and followed by an observational 6-month phase of conventional rehabilitation. In the experimental group, the therapist will implement the diary-based and antagonist-targeting Guided Self-rehabilitation Contract method using two monthly home visits. The method involves: i) prescribing a daily antagonist-targeting self-rehabilitation program, ii) teaching the techniques involved in the program, iii) motivating and guiding the patient over time, by requesting a diary of the work achieved to be brought back by the patient at each visit. In the control group, participants will benefit from conventional therapy only, as per their physician’s prescription.

The two co-primary outcome measures are the maximal ambulation speed barefoot over 10 m for the lower limb, and the Modified Frenchay Scale for the upper limb. Secondary outcome measures include total cost of care from the medical insurance point of view, physiological cost index in the 2-min walking test, quality of life (SF 36) and measures of the psychological impact of the two treatment modalities. Participants will be evaluated every 6 months (D1/M6/M12/M18/M24) by a blinded investigator, the experimental period being between M6 and M18. Each patient will be allowed to receive any medications deemed necessary to their attending physician, including botulinum toxin injections.

This study will increase the level of knowledge on the effects of Guided Self-rehabilitation Contracts in patients with chronic stroke-induced hemiparesis.

The most common motor deficit following stroke is spastic hemiparesis [1]. More than 90% of patients with hemiparesis recover some lower limb function after a stroke, but rarely with a level of ease or speed that would allow for independent and comfortable ambulation in everyday life, outdoors in particular [1, 2, 3]. In the upper limb, the proportion of patients that recover daily use of the arm is estimated between 10 and 30% [4, 5, 6, 7, 8]. Consequently, around half of stroke survivors do not resume professional activities, and two thirds remain chronically disabled [9].

In parallel, most patients in chronic stages have their rehabilitation discontinued or converted into “maintenance” therapy, as professionals often estimate that they might no longer progress [7, 10, 11, 12, 13, 14, 15]. Others benefit from reinduction periods, prescribed according to subjective or ill-defined criteria. It has not been demonstrated that this conventional rehabilitation system now fits current knowledge on behavior-induced brain plasticity and on the potential for motor recovery in chronic spastic paresis [16, 17, 18]. Indeed, a significant body of evidence demonstrates that high intensity of rehabilitation (the opposite of “maintenance therapy”) correlates with motor function improvement in chronic stages [16, 19, 20]. One way to achieve sufficient amounts of physical treatment might be to adequately guide and motivate the patient into practicing self-rehabilitation [18, 20]. It has been confirmed that programs of exercises given by the therapist to be performed at home are appreciated by patients not only for the structure they give to everyday life, but also as they represent in themselves a source of motivation and hope, particularly when these programs are associated with ongoing professional support [21, 22].

We hypothesize that there is confusion between the lesion-induced plasticity of the central nervous system – essentially during the first 6 months post-lesion – and the behavior-induced plasticity, which lasts indefinitely [16, 17, 23, 24, 25, 26, 27]. The latter justifies initiatives to organize chronic and intense physical rehabilitation work [17, 18, 23, 24, 25, 26, 27, 28]. Even though previous, short-term open studies evaluating self-rehabilitation programs in spastic hemiparesis suggested the possibility of functional improvement, to our knowledge there are no large-scale prospective randomized controlled protocols that test the effectiveness of long term self-rehabilitation programs in spastic hemiparesis as against conventional rehabilitation systems, especially in chronic stages [29, 30, 31, 32, 33, 34, 35, 36].

Technically, which home rehabilitation exercises might be recommended? From a neurophysiological point of view, muscle overactivity chronologically emerges as the third fundamental feature of motor impairment that begins in the subacute phase in hemiparesis, following paresis and soft tissue contracture that appear in the acute phase [37, 38, 39]. One recognizable form of muscle overactivity is spasticity (hyper-reflectivity to phasic stretch), which is potentiated by muscle shortening [37, 38]. Hypersensitivity to stretch in an antagonist muscle also impedes voluntary motoneurone recruitment for the agonist muscle, a phenomenon called “stretch-sensitive paresis” [40]. As none of the three fundamental mechanisms of motor impairment (paresis, muscle shortening, and muscle overactivity) is distributed symmetrically between agonists and antagonists, there are force imbalances around joints, hindering active movements and deforming body postures [41]. Each of these three mechanisms of impairment, particularly the two most important, which are muscle shortening and muscle overactivity, can be specifically targeted with local treatment, muscle by muscle, aiming to rebalance forces, joint by joint [28]. For the less overactive muscles around each joint, an intensive motor training will aim to break the vicious cycle Paresis-Disuse-Paresis [37]. For their shortened and more overactive antagonists most importantly, a daily program of self-stretch postures at high load combined with a program of maximal amplitude rapid alternating movements, potentially associated with botulinum toxin injections, will aim to increase muscle extensibility and reduce cocontraction, breaking the vicious cycle: Muscle shortening-Overactivity-Muscle shortening [28, 42, 43] (www.i-gsc.com). Significant preliminary results obtained using prescription and teaching of self-rehabilitation programs within a Guided Self-rehabilitation Contract (GSC) led us to hypothesize that this method practiced over the long term might enhance active motor function in chronic hemiparesis beyond 1 year following stroke [18, 44, 45, 46, 47, 48].

From a social point of view, stroke is the leading cause of acquired disability in Western countries. For the Steering Committee on Stroke Prevention and Management in France, the yearly cost of stroke is €5.9 billions, the cost of care in medical and social facilities is €2.4 billions and the cost of daily allowances and disability pensions is €125.8 millions [49]. Additionally, several studies have shown that indirect costs were proportional to direct costs [50]. Stroke thus accounts for a large share of health expenditures. In that regard as well, devising a feasible and effective guided self-rehabilitation program might offer financial advantages for our health systems.[…] 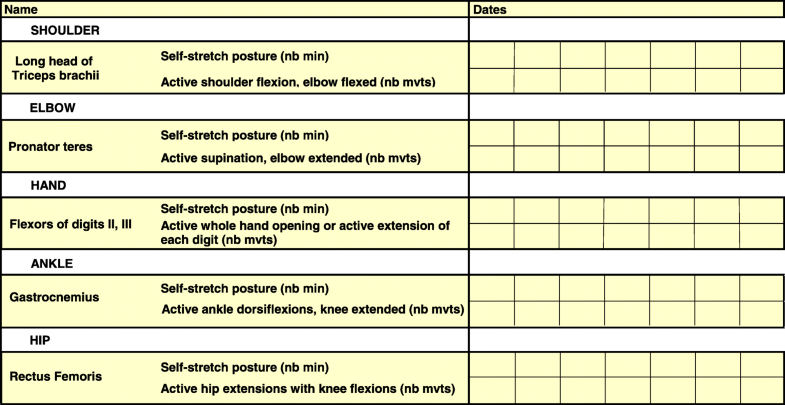 Posted by Kostas Pantremenos in Paretic Hand on September 25, 2018

Poststroke deficits in upper extremity function occur during activities of daily living due to motor impairments of the paretic arm, including weakness and abnormal synergies, both of which result in altered use of the paretic arm. Over time, chronic disuse and a resultant flexed elbow posture may result in secondary changes in the musculoskeletal system that may limit use of the arm and impact functional mobility.

This study utilized extended field-of-view ultrasound to measure fascicle lengths of the biceps (long head) and triceps (distal portion of the lateral head) brachii in order to investigate secondary alterations in muscles of the paretic elbow.

Data were collected from both arms in 11 individuals with chronic hemiparetic stroke, with moderate to severe impairment as classified by the Fugl-Meyer assessment score. Across all participants, significantly shorter fascicles were observed in both biceps and triceps brachii (P < .0005) in the paretic limb under passive conditions. The shortening in paretic fascicle length relative to the nonparetic arm measured under passive conditions remained observable during active muscle contraction for the biceps but not for the triceps brachii.

Finally, average fascicle length differences between arms were significantly correlated to impairment level, with more severely impaired participants showing greater shortening of paretic biceps fascicle length relative to changes seen in the triceps across all elbow positions (r= −0.82, P = .002). Characterization of this secondary adaptation is necessary to facilitate development of interventions designed to reduce or prevent the shortening from occurring in the acute stages of recovery poststroke.

Muscle and bone form a functional unit. Residual physical poststroke impairments such as muscle weakness, spasticity, and decrease in function can promote metabolic bone changes. Moreover, muscle strength can influence this process. Thus, the purpose of the present study was to investigate bone volume and mobility performance in subjects with chronic hemiparesis post stroke.

A cross-sectional study was performed on 14 subjects post stroke who were paired with healthy controls. Bone volume, isometric muscle performance, and mobility levels were measured. Midfemoral bone volumes were determined using magnetic resonance imaging, and muscular performance was measured by dynamometry. Mobility was measured using the Timed Up and Go Test and the 10-Meter Walk Test.

Objective: This presentation will review the basic neuroscience research origins and the effects of Constraint-Induced Movement therapy (CIMT) on CNS structural neuroplasticity.

Background: Experimental hemiparesis in primates overcame chronic limb nonuse by applying specific behavioral neuroscience principles. This research led to formulating a model for the origination of sustained motor disability after neurological injury and its improvement by a novel therapeutic program. The therapy became adapted to treating children and adults and termed CIMT. Over the past 25 years multiple worldwide Randomized Controlled Trials of CIMT enrolled nearly 2000 patients with diverse neurological disorders (stroke, cerebral palsy [CP], multiple sclerosis [MS]), which indicated superiority of the approach against control therapies, with large treatment Effect Sizes and sustained retention of improved spontaneous real-world use of the hemiparetic limb. Ongoing research will describe basic and clinical neuroimaging methods to explore the basis for the clinical efficacy of CIMT.

Conclusions: CIMT is increasing worldwide practice to improve reduced real-world limb use in chronic hemiparesis in diverse neurological diseases and ages of patients. Structural CNS changes following CIMT may support improved and extended functional use of the paretic limb.

Posted by Kostas Pantremenos in Uncategorized on August 8, 2015

Background: Muscle weakness is the main cause of motor impairment among stroke survivors and is associated with reduced peak muscle torque.

Objective: To systematically investigate and organize the evidence of the reliability of muscle strength evaluation measures in post-stroke survivors with chronic hemiparesis.

Data Extraction: We extracted outcomes from included studies about reliability data, measured by intraclass correlation coefficient (ICC) and/or similar. The meta-analyses were conducted only with isokinetic data.

Conclusion: Objective muscle strength assessment can be reliably used in lower and upper extremities in post-stroke patients with chronic hemiparesis.

Results. Among 18 patients with chronic hemiparesis after stroke, the AR game was associated with 21% higher game scores (P = .0001), 19% faster reaching times (P = .0001), and 15% less movement variability (P = .0068), as compared to the PC game. Correlations between game score and arm motor status were stronger with the AR version.

Conclusions. Motor performances during the AR game were superior to those during the PC game. This result is due in part to the greater cognitive demands imposed by the PC game, a feature problematic for some patients but clinically useful for others. Mode of human–computer interface influences rehabilitation therapy demands and can be individualized for patients.

via Choice of Human–Computer Interaction Mode in Stroke Rehabilitation.