Posted by Kostas Pantremenos in Educational on December 13, 2019

The use of Artificial Intelligence and machine learning in basic research and clinical neuroscience is increasing. AI methods enable the interpretation of large multimodal datasets that can provide unbiased insights into the fundamental principles of brain function, potentially paving the way for earlier and more accurate detection of brain disorders and better informed intervention protocols. Despite AI’s ability to create accurate predictions and classifications, in most cases it lacks the ability to provide a mechanistic understanding of how inputs and outputs relate to each other. Explainable Artificial Intelligence (XAI) is a new set of techniques that attempts to provide such an understanding, here we report on some of these practical approaches. We discuss the potential value of XAI to the field of neurostimulation for both basic scientific inquiry and therapeutic purposes, as well as, outstanding questions and obstacles to the success of the XAI approach.

One of the greatest challenges to effective brain-based therapies is our inability to monitor and modulate neural activity in real time. Moving beyond the relatively simple open-loop neurostimulation devices that are currently the standard in clinical practice (e.g., epilepsy) requires a closed-loop approach in which the therapeutic application of neurostimulation is determined by characterizing the moment-to-moment state of the brain (Herron et al., 2017). However, there remain major obstacles to progress for such a closed-loop approach. For one, we do not know how to objectively characterize mental states or even detect pathological activity associated with most psychiatric disorders. Second, we do not know the most effective way to improve maladaptive behaviors by means of neurostimulation. The solutions to these problems require innovative experimental frameworks leveraging intelligent computational approaches able to sense, interpret, and modulate large amount of data from behaviorally relevant neural circuits at the speed of thoughts. New approaches such as computational psychiatry (Redish and Gordon, 2016; Ferrante et al., 2019) or ML are emerging. However, current ML approaches that are applied to neural data typically do not provide an understanding of the underlying neural processes or how they contributed to the outcome (i.e., prediction or classifier). For example, significant progress has been made using ML to effectively classify EEG patterns, but the understanding of brain function and mechanisms derived from such approaches still remain relatively limited (Craik et al., 2019). Such an understanding, be it correlational or causal, is key to improving ML methods and to suggesting new therapeutic targets or protocols using different techniques. Explainable Artificial Intelligence (XAI) is a relatively new set of techniques that combines sophisticated AI and ML algorithms with effective explanatory techniques to develop explainable solutions that have proven useful in many domain areas (Core et al., 2006; Samek et al., 2017; Yang and Shafto, 2017; Adadi and Berrada, 2018; Choo and Liu, 2018; Dosilovic et al., 2018; Holzinger et al., 2018; Fernandez et al., 2019; Miller, 2019). Recent work has suggested that XAI may be a promising avenue to guide basic neural circuit manipulations and clinical interventions (Holzinger et al., 2017b; Vu et al., 2018; Langlotz et al., 2019). We will develop this idea further here.

Explainable Artificial Intelligence for neurostimulation in mental health can be seen as an extension in the design of BMI. BMI are generally understood as combinations of hardware and software systems designed to rapidly transfer information between one or more brain area and an external device (Wolpaw et al., 2002; Hatsopoulos and Donoghue, 2009; Nicolelis and Lebedev, 2009; Andersen et al., 2010; Mirabella and Lebedev, 2017). While there is a long history of research in the decoding, analyses and production of neural signal in non-human primates and rodents, a lot of progress has recently been made to develop these techniques for the human brain both invasively and non-invasively, unidirectionally or bi-directionally (Craik et al., 2019; Martini et al., 2019; Rao, 2019). Motor decision making for example, has been shown to involve a network of brain areas, before and during movement execution (Mirabella, 2014; Hampshire and Sharp, 2015), so that BMI intervention can inhibit movement up to 200 ms after its initiation (Schultze-Kraft et al., 2016; Mirabella and Lebedev, 2017). The advantage of this type of motor-decision BMI is that it is not bound to elementary motor commands (e.g., turn the wheel of a car), but rather to the high-level decision to initiate and complete a movement. That decision can potentially be affected by environmental factors (e.g., AI vision system detecting cars on the neighboring lane) and internal state (e.g., AI system assessing the state of fatigue of the driver). The current consensus is that response inhibition is an emergent property of a network of discrete brain areas that include the right inferior frontal gyrus and that leverage basic wide-spread elementary neural circuits such a local-lateral-inhibition (Hampshire and Sharp, 2015; Mirabella and Lebedev, 2017). This gyrus, as with many other cortical structures, is dynamically recruited so that individual neurons may code for drastically different aspects of the behavior, depending of the task at hand. Consequently, designing a BMI targeting such an area requires the ability for the system to rapidly switch its decoding and stimulation paradigms as a function of environmental or internal state information. Such online adaptability needs of course to be learned and personalized to each individual patient, a task that is ideally suited for AI/ML approaches. In the sensory domain, some have shown that BMI can be used to generate actionable entirely artificial tactile sensations to trigger complex motor decisions (O’Doherty et al., 2012; Klaes et al., 2014; Flesher et al., 2017). Most of the BMI research work has, however, focused on the sensory motor system because of the relatively focused and well-defined nature of the neural circuits. Consequently, most of the clinical applications are focused on neurological disorders. Interestingly, new generations of BMIs are emerging that are focused on more cognitive functions such as detecting and manipulating reward expectations using reinforcement learning paradigms (Mahmoudi and Sanchez, 2011; Marsh et al., 2015; Ramkumar et al., 2016), memory enhancement (Deadwyler et al., 2017) or collective problem solving using multi-brain interfacing in rats (Pais-Vieira et al., 2015) or humans (Jiang et al., 2019). All these applications can potentially benefit from the adaptive properties of AI/ML algorithms and, as mentioned, explainable AI approaches have the promise of yielding basic mechanistic insights about the neural systems being targeted. However, the use of these approaches in the context of psychiatric or neurodevelopmental disorders has not been realized though their potential is clear.

In computational neuroscience and computational psychiatry there is a contrast between theory-driven (e.g., reinforcement learning, biophysically inspired network models) and data-driven models (e.g., deep-learning or ensemble methods). While the former models are highly explainable in terms of biological mechanisms, the latter are high performing in terms of predictive accuracy. In general, high performing methods tend to be the least explainable, while explainable methods tend to be the least accurate. Mathematically, the relationship between the two is still not fully formalized or understood. These are the type of issues that occupy the ML community beyond neuroscience and neurostimulation. XAI models in neuroscience might be created by combining theory- and data-driven models. This combination could be achieved by associating explanatory semantic information with features of the model; by using simpler models that are easier to explain; by using richer models that contain more explanatory content; or by building approximate models, solely for the purpose of explanation.

Current efforts in this area include: (1) identify how explainable learning solutions can be applied to neuroscience and neuropsychiatric datasets for neurostimulation, (2) foster the development of a community of scholars working in the field of explainable learning applied to basic neuroscience and clinical neuropsychiatry, and (3) stimulate an open exchange of data and theories between investigators in this nascent field. To frame the scope of this article, we lay out some of the major key open questions in fundamental and clinical neuroscience research that can potentially be addressed by a combination of XAI and neurostimulation approaches. To stimulate the development of XAI approaches the National Institute of Mental Health (NIMH) has released a funding opportunity to apply XAI approaches for decoding and modulating neural circuit activity linked to behavior1.

A variety of perspectives for how ML and, more generally AI could contribute to closed-loop brain circuit interventions are worth investigating (Rao, 2019). From a purely signal processing stand point, an XAI system can be an active stimulation artifact rejection component (Zhou et al., 2018). In parallel, the XAI system should have the ability to discover – in a data-driven manner – neuro-behavioral markers of the computational process or condition under consideration. Remarkable efforts are currently underway to derive biomarkers for mental health, as is the case for example for depression (Waters and Mayberg, 2017). Once these biomarkers are detected, and the artifacts rejected, the XAI system can generate complex feedback stimulation patterns designed and monitored (human in-the loop) to improve behavioral or cognitive performance (Figure 1). XAI approaches have also the potential to address outstanding biological and theoretical questions in neuroscience, as well as to address clinical applications. They seem well-suited for extracting actionable information from highly complex neural systems, moving away from traditional correlational analyses and toward a causal understanding of network activity (Yang et al., 2018). However, even with XAI approaches, one should not assume that understanding the statistical causality of neural interactions is equivalent to understanding behavior; a highly sophisticated knowledge of neural activity and neural connectivity is not generally synonymous with understanding their role in causing behavior. 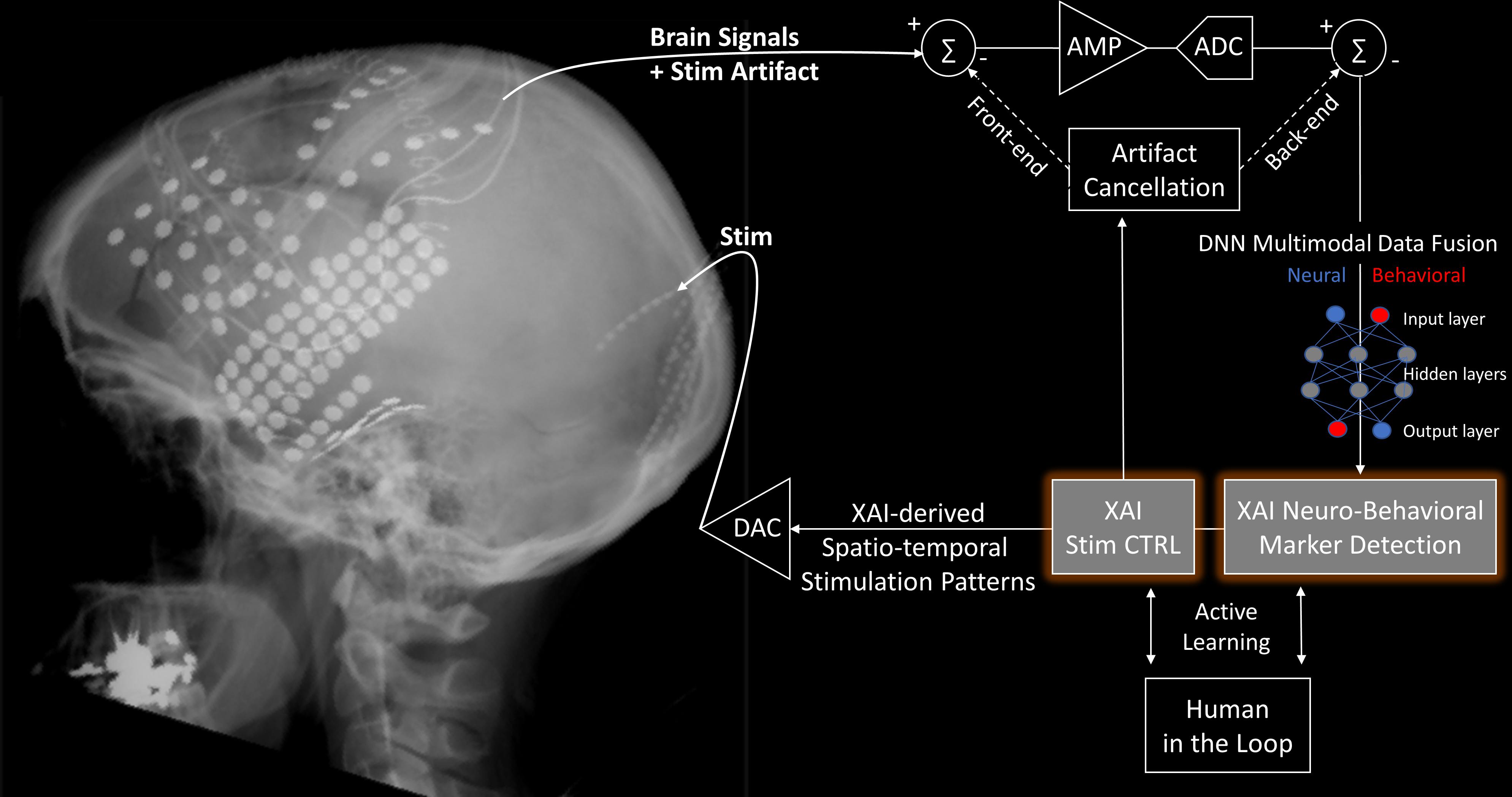