Results: In the left SM1 the HbO value was significantly higher at 0.5 Hz, compared with movements performed at 0.25 Hz and 0.75 Hz (p < 0.05), while no significant differences were observed in the left PMA (p > 0.05). In the group analysis, the left SM1 was activated during passive movements at three speeds (uncorrected p < 0.05) and the greatest activation in the SM1 was observed at 0.5 Hz.

Conclusions: In conclusion, the contralateral SM1 showed the greatest activation by a moderate speed (0.5 Hz) rather than slow (0.25 Hz) and fast (0.75 Hz) speed. Our results suggest an ideal speed for execution of the wrist rehabilitation robot. Therefore, our results might provide useful data for more effective and empirically-based robot rehabilitation therapy.

Brain plasticity, the ability of our brain system to reorganize its structure and function, is the basic mechanism underlying functional recovery in patients with brain injury (Schaechter, 2004; Murphy and Corbett, 2009). The underlying principle of rehabilitation in terms of brain plasticity is based on the modulation of cortical activation induced by the manipulation of external stimuli (Kaplan, 1988). Little is known about the cortical effects resulting from rehabilitation robot treatment (Li et al., 2013; Chang et al., 2014; Jang et al., 2015).

In this study, we hypothesized that there exists optimal conditions for robotic rehabilitation to enhance the rehabilitative effect. The speed of movement performed by rehabilitation robot could be a unique aspect of robot rehabilitation, because varied speed can be provided consistently only with the robot. To confirm our hypothesis, using fNIRS, we examined the optimal speed of passive wrist movements performed by a rehabilitation robot that induces cortical activation through proprioceptive input by passive movements (Radovanovic et al., 2002; Francis et al., 2009; Lee et al., 2012). As a part of upper limb, the wrist enhances the usefulness of the hand by allowing it to take different orientations with respect to the elbow (van der Lee, 2001). If there exists an optimal speed that offers the greatest cortical activation, it could be applicable for robotic rehabilitation and research for other optimal conditions such as duration.

Healthy right-handed subjects (15 males, 8 females; mean age 26.5, range 21–30) with no history of neurological, psychiatric, or physical illness were recruited for this study. Handedness was evaluated using the Edinburg Handedness Inventory (Oldfield, 1971). All subjects were fully informed about the purpose of the research and provided written, informed consent prior to participation in this study. The study protocol was approved by the Institutional Review Board of the Daegu Gyeongbuk Institute of Science and Technology (DGIST). Data from two subjects were excluded because the subjects did not follow the required instructions during the data collection.

Regarding flexion and extension only, the human wrist can be simplified as a one degree of freedom (DOF) kinematic model with one revolute joint (Zatsiorsky, 2002). As mentioned above, the wrist rehabilitation robot was designed and manufactured as a simplified kinematic model of the wrist. The robot used for wrist rehabilitation has three parts: hand, wrist joint and forearm, and provides passive movement of flexion and extension (Figure 1). It has a gear driven mechanism using a single motor. The actuation system for the wrist part is composed of DC, a brushless motor with encoder (EC-i 40, Maxon motor), harmonic drive (CSF-11-50, Sam-ik THK, gear ratio 50:1), and force-torque sensor (Mini 45, ATI). In house developed software was used to control the robot. For the real-time control, Linux Fedora 11 and the Real Time Application Interface for Linux (RTAI) Ver 3.8 systems were mounted. Real-time sensing control was achieved using an encoder and Sensoray s626 board, in which time delay control (TDC) was used for precise position control. The robot showed a position error of 0.1°–1° during the experiment. 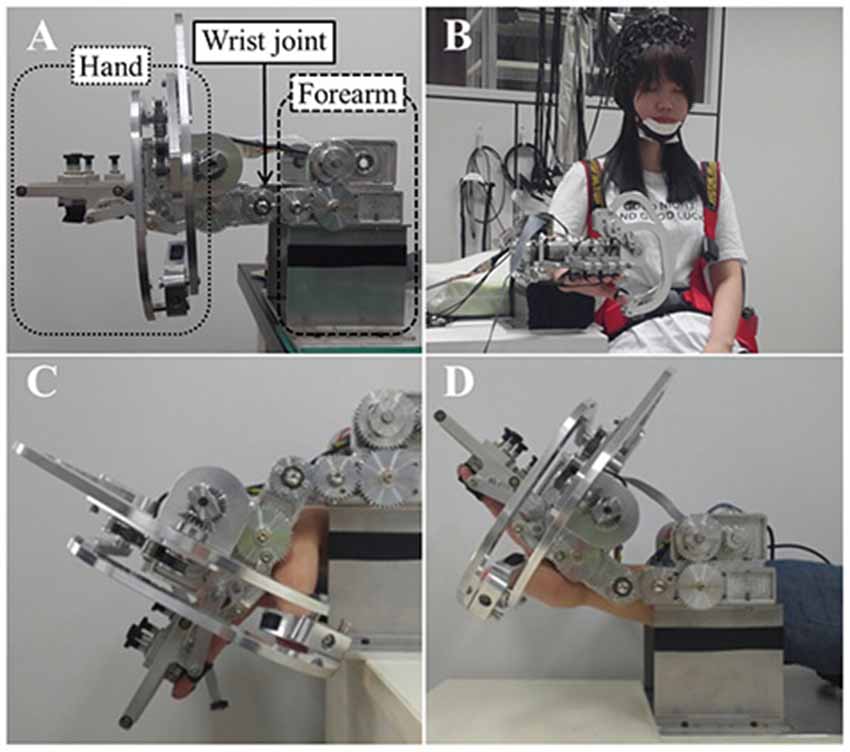 When using the robot for wrist rehabilitation, the hand and forearm must be fixed to the robot in order to perform the passive wrist movement. First, the subjects placed their forearm on the armrest made of foam covered with a soft cloth. They were instructed to place their hand on the support bar under the hand part of the robot before fixing all fingers to the finger holder with velcro straps. The robot performs the passive wrist exercise using a rotary motion of a gear driven by a motor and realizes a full range of motion (ROM) from 80° (flexion) to 75° (extension) when the degree of neutral wrist position is 0°, with the wrist in a flat position, with velocity of the wrist motions up to 2 Hz.[…]

[Abstract] A pilot study on the optimal speeds for passive wrist movements by a rehabilitation robot of stroke patients: A functional NIRS study

Abstract:
The optimal conditions inducing proper brain activation during performance of rehabilitation robots should be examined to enhance the efficiency of robot rehabilitation based on the concept of brain plasticity. In this study, we attempted to investigate differences in cortical activation according to the speeds of passive wrist movements performed by a rehabilitation robot for stroke patients. 9 stroke patients with right hemiparesis participated in this study. Passive movements of the affected wrist were performed by the rehabilitation robot at three different speeds: 0.25 Hz; slow, 0.5Hz; moderate and 0.75 Hz; fast. We used functional near-infrared spectroscopy to measure the brain activity during the passive movements performed by a robot. Group-average activation map and the relative changes in oxy-hemoglobin (ΔOxyHb) in two regions of interest: the primary sensory-motor cortex (SM1); premotor area (PMA) and region of all channels were measured. In the result of group-averaged activation map, the contralateral SM1, PMA and somatosensory association cortex (SAC) showed the greatest significant activation according to the movements at 0.75 Hz, while there is no significantly activated area at 0.5 Hz. Regarding ΔOxyHb, no significant diiference was observed among three speeds regardless of region. In conclusion, the contralateral SM1, PMA and SAC showed the greatest activation by a fast speed (0.75 Hz) rather than slow (0.25 Hz) and moderate (0. 5 Hz) speed. Our results suggest an optimal speed for execution of the wrist rehabilitation robot. Therefore, we believe that our findings might point to several promising applications for future research regarding useful and empirically-based robot rehabilitation therapy.
Published in: Rehabilitation Robotics (ICORR), 2017 International Conference on

Source: A pilot study on the optimal speeds for passive wrist movements by a rehabilitation robot of stroke patients: A functional NIRS study – IEEE Xplore Document