Gait impairment is a common consequence of stroke and typically involves a hemiparetic or asymmetric walking pattern. Asymmetric gait patterns are correlated with decreased gait velocity and efficiency as well as increased susceptibility to serious falls and injuries.

This paper presents an innovative device worn on a foot for gait rehabilitation post stroke. The device generates a backward motion to the foot, which is designed to exaggerate the existing step length asymmetry while walking over ground. We hypothesize this motion will decrease gait asymmetry and improve functional walking in individuals with chronic stroke.

Six participants with chronic stroke, more than one year post stroke, received four weeks of gait training with three sessions per week. Each session included 30 min of walking over ground using the wearable device. Gait symmetry and functional walking were assessed before and after training.

Each year approximately 800,000 Americans experience a new or recurrent stroke, and an estimated six million are living with gait impairments from a stroke [1]. One such disability is a ‘hemiparetic’ gait [2], which can be characterized by asymmetries in gait measures such as step length and support times [3, 4]. Hemiparetic gait is correlated with decreased gait velocity [5, 6], reduced walking efficiency [7], increased joint and bodily degradation [8], and increased susceptibility to injuries and falls [9, 10].

In this paper, we present a novel device (shown in Fig. 1) designed to help individuals post stroke re-learn how to walk with little to no therapeutic infrastructure needed. Unlike many of the existing gait rehabilitation devices, this device is passive, portable, wearable, and does not require any external energy. It functions by moving the nonparetic foot backward while the individual walks over ground [22]. The backward motion of the shoe is generated passively by redirecting the wearer’s downward force during stance phase [23]. Since the motion is generated by the wearer’s force, the person is in control, which allows easier adaptation to the motion, but this also causes the speed to vary slightly from person to person. The generated motion is demonstrated in Fig. 2. A height and weight matched shoe is attached to the paretic foot, but does not generate any motion. 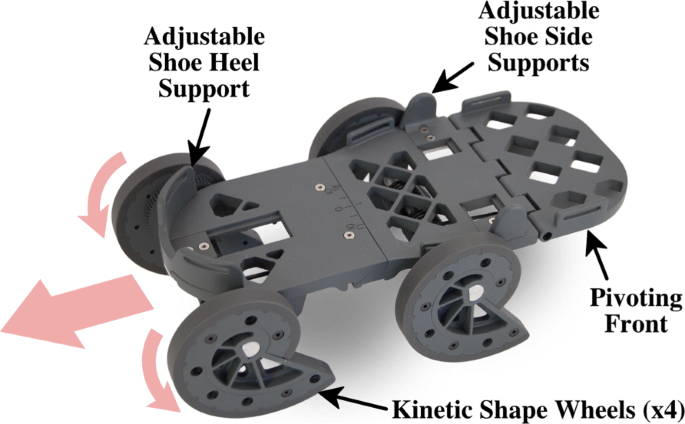