Introduction Effective interventions to promote upper-limb recovery poststroke are characterised by intensive and repetitive movements. However, the repetitive nature of practice may adversely impact on adherence. Therefore, the development of rehabilitation devices that can be used safely and easily at home, and are motivating, enjoyable and affordable is essential to the health and well-being of stroke survivors.

Methods and analysis Thirty people poststroke will be provided with a Neurofenix platform, consisting of a NeuroBall or NeuroBands (dependent on impairment level), seven specially designed games, a tablet and handbook to independently exercise their upper limb for 7 weeks. Training commences with a home visit from a research therapist to teach the participant how to safely use the device. Outcomes assessed at baseline and 8 weeks and 12 weeks are gross level of disability, pain, objectively measured arm function and impairment, self-reported arm function, passive range of movement, spasticity, fatigue, participation, quality of life (QOL) and health service use. A parallel process evaluation will assess feasibility, acceptability and safety of the intervention through assessment of fidelity to the intervention measured objectively through the Neurofenix platform, a postintervention questionnaire and semistructured interviews exploring participants’ experiences of the intervention. The feasibility of conducting an economic evaluation will be determined by collecting data on QOL and resource use.

Strengths and limitations of this study

Stroke is the leading cause of severe disability worldwide with approximately 17 million new strokes each year.1 2 The UK has 1.2 million stroke survivors with 110 000 first-time strokes occurring each year resulting in an estimated societal cost of £26 billion per year.1 2 Following stroke, 85% of people initially experience upper-limb weakness, and of those with minimal movement on hospital admission, only 11%–14% regain full function of their arm.2–4 This loss in upper-limb function results in increased dependence and decreased quality of life (QOL).5 Reduced upper-limb function has been identified as a strong predictor of lowered psychological well-being poststroke.5 6 Innovation and investigation of effective treatments for arm recovery has been identified as a priority for stroke research.7

Evidence indicates the most effective interventions to improve upper-limb function are characterised by high intensity and repetitive practice.8 A higher intensity and frequency of upper-limb stroke rehabilitation is associated with improved QOL,9 motor function and ability to perform activities of daily life10 and is cost-effective.11 The UK quality standard for stroke advises 45 min of each relevant therapy for a minimum of 5 days a week.11 However, a 2015 UK national stroke audit showed on average most hospitals are unable to meet this quality standard.12 Specifically, time spent retraining the upper limb is very low, with an average of 32 repetitions per rehabilitation session.13 14 As such, there is a growing emphasis on the stroke survivor exercising independently without the presence of a therapist. However, adherence to home exercise is known to be poor.15 16 A perceived lack of support and feedback along with boredom with exercises are the most frequently cited factors associated with poor compliance.17 18

Virtual reality (VR)-based activities have been suggested as an intervention to improve upper-limb recovery by providing motivating environments or gameplay to facilitate rehabilitation.19 This digital health solution helps address boredom and compliance problems, can facilitate increased time in therapy and may not be reliant on therapist contact time.19 20 In addition, the ability of VR activities to provide feedback may enhance motor learning.21 22 Visual feedback via an on-screen character (avatar) can activate mirror neurones, which may aid recovery from stroke.23 24

VR can be considered in terms of the level of immersion provided, that is, the degree the user feels present in the virtual world due to the technical aspects of the VR environment. Immersive systems can generate life-scaled, three-dimensional images, with surround sound auditory and sensory feedback such as vibration, and pressure,25 whereas non-immersive systems involve two-dimensional images typically viewed on a screen with interaction being via controller-based systems (such as computer keyboards, joysticks, balance boards and handheld devices) or via camera-based tracking systems.26 Non-immersive systems are more commonly used for rehabilitation as they have smaller space requirements, cost less and have fewer side effects (eg, motion sickness).27

The Neurofenix platform is a non-immersive device designed to enable and encourage stroke survivors to independently exercise their upper limb with minimal therapist input. The platform was developed by Neurofenix, a bioengineering enterprise (www.neurofenix.com), along with stroke survivors and neurological physiotherapists. The platform consists of a hand controller or armbands, seven specially designed games, a tablet and an instruction handbook.[…] 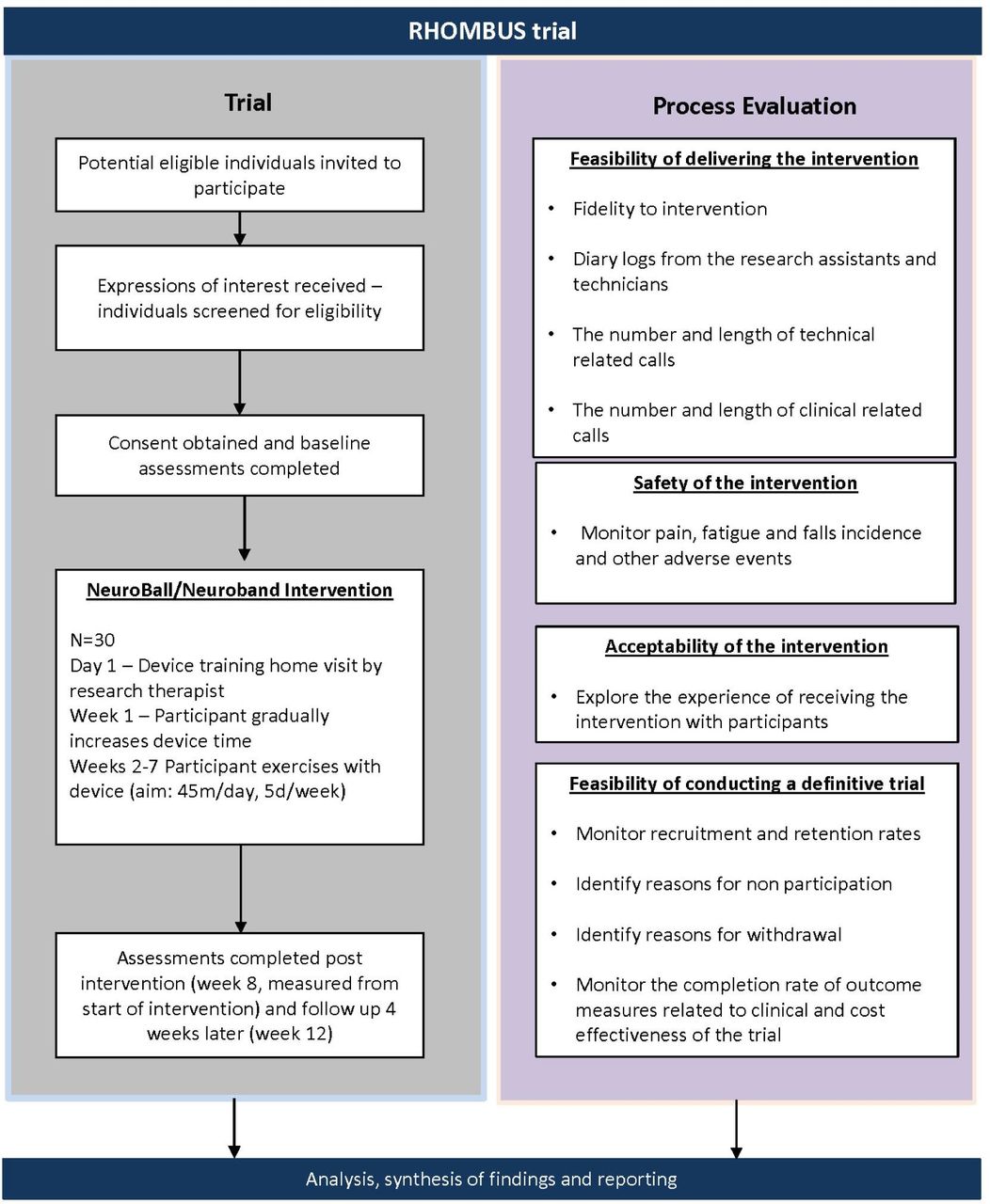