Game-based exercise is effective for improving strength and motor function in stroke patients undergoing rehabilitation, and it creates fun and motivation for exercise.

We investigated the effect of game-based exercise on hand strength, motor function, and compliance in stroke patients.

Fifty stroke patients were randomly divided into experimental and control groups. The experimental group performed a game-based hand resistance exercise. This exercise was divided into isotonic and isometric types and was performed 30 min/day, 5 days/week, for 6 weeks with 70% of the 1-repetition maximum. In contrast, the control group was given a traditional manual exercise by the occupational therapist, and the type of exercise and time involved were the same as those in the experimental group. The primary outcome measure was hand strength test measured using a dynamometer. Secondary outcome measures were manual function tests (MFT) and hand function tests using box and block test (BBT). Subject-based reports of motivation, fun, pain/fatigue evaluated on 0 to 10 numeric rating scales were compared between groups.

In conclusion, we demonstrated that game-based exercise is more effective than manual exercise in improving muscle strength, motor function, and compliance in stroke patients.

Posted by Kostas Pantremenos in Spasticity on November 13, 2018

High-frequency alternating currents of greater than 1 kHz applied on peripheral nerves has been used in animal studies to produce a motor nerve block. It has been evidenced that frequencies higher than 5 kHz are necessary to produce a complete peripheral nerve block in primates, whose nerve thickness is more similar to humans. The aim of the study was to determine the effect on muscle strength after the application of a high-frequency stimulation at 5 and 10 kHz compared to sham stimulation in healthy volunteers.

These findings suggest high-frequency stimulation has an inhibitory effect over muscle strength. Future studies are required in patients that are characterized by motor hyperactive such as spasticity or tremors.

Previous studies in animals have shown that high-frequency alternating current (HFAC) of greater than 1 kHz applied on exposed peripheral nerves can produce a motor nerve block (Bhadra and Kilgore [1, 2]). An in vivo study, [3] showed that frequencies higher than 5 kHz were able to block nerve conduction of motor fibers. One study [4] in non-injured subjects showed an incomplete block when transcutaneous HFAC applied to the radial nerve at 5 kHz increased somatosensory thresholds. It has been evidenced [5] that frequencies higher than 5 kHz are necessary to produce a complete peripheral nerve block in primates, whose nerve diameter is similar to humans, however, there is not any human study that apply HFAC transcutaneously with frequencies higher than 5 kHz. It is believed that the nerve conduction block produced by application of HFAC could be a useful tool for the treatment of patients with pain or with an exaggerated increase of nerve activity, such as hypertonia or spasms.

The purpose of this study was to determine the effects on maximal handgrip strength (MHS) of a non-invasive HFAC at 5 kHz and 10 kHz applied to the ulnar and median nerves in healthy subjects, compared to a sham stimulation.[…] 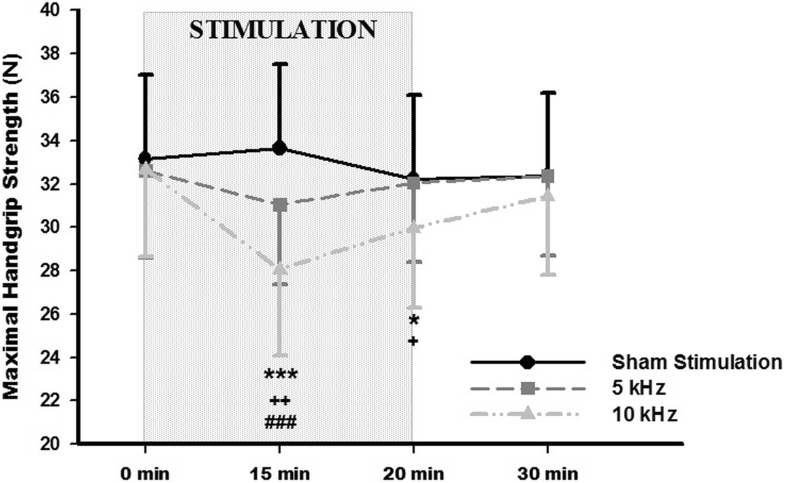 The debilitating effects on hand function from a number of a neurologic disorders has given rise to the development of rehabilitative robotic devices aimed at restoring hand function in these patients. To combat the shortcomings of previous traditional robotics, soft robotics are rapidly emerging as an alternative due to their inherent safety, less complex designs, and increased potential for portability and efficacy. While several groups have begun designing devices, there are few devices that have progressed enough to provide clinical evidence of their design’s therapeutic abilities. Therefore, a global review of devices that have been previously attempted could facilitate the development of new and improved devices in the next step towards obtaining clinical proof of the rehabilitative effects of soft robotics in hand dysfunction.

A literature search was performed in SportDiscus, Pubmed, Scopus, and Web of Science for articles related to the design of soft robotic devices for hand rehabilitation. A framework of the key design elements of the devices was developed to ease the comparison of the various approaches to building them. This framework includes an analysis of the trends in portability, safety features, user intent detection methods, actuation systems, total DOF, number of independent actuators, device weight, evaluation metrics, and modes of rehabilitation.

In this study, a total of 62 articles representing 44 unique devices were identified and summarized according to the framework we developed to compare different design aspects. By far, the most common type of device was that which used a pneumatic actuator to guide finger flexion/extension. However, the remainder of our framework elements yielded more heterogeneous results. Consequently, those results are summarized and the advantages and disadvantages of many design choices as well as their rationales were highlighted.

The past 3 years has seen a rapid increase in the development of soft robotic devices for hand rehabilitative applications. These mostly preclinical research prototypes display a wide range of technical solutions which have been highlighted in the framework developed in this analysis. More work needs to be done in actuator design, safety, and implementation in order for these devices to progress to clinical trials. It is our goal that this review will guide future developers through the various design considerations in order to develop better devices for patients with hand impairments.

Imagine tying your shoes or putting on a pair of pants while having limited use of your hands. Now imagine the impact on your daily life if that limitation was permanent. The ability to perform activities of daily living (ADL) is highly dependent on hand function, leaving those suffering with hand impairments less capable of executing ADLs and with a reduced quality of life. Unfortunately, the hand is often the last part of the body to receive rehabilitation.

According to a 2015 National Health Interview Survey, there were approximately 4.7 million adults in the United States that found it “Very difficult to or cannot grasp or handle small objects” [1]. Hand impairments are commonly observed in neurological and musculoskeletal diseases such as arthritis, Cerebral Palsy, Parkinson’s Disease, and stroke. A summary of motor impairment prevalence associated with these diseases may be seen in Table 1. Fortunately, physical rehabilitation has been shown to promote motor recovery through repetitive isolated movements [2–5]. This is largely due to neuroplasticity – the ability for the brain to reorganize itself by establishing new neural connections. Occupational and physical therapists thus attempt to take advantage of neuroplasticity in order to re-map motor function in the brain through repeated exercise. Currently, however, there is no consensus on the best mode and dosing to facilitate neuroplasticity [6]. Additionally, recovery success relies heavily on a patient’s ability to attend therapy, which can be deterred by the frequency, duration, or cost of the therapy. Robotic devices could enhance access to repeated exercise. As such, they have been developed and investigated for their utilization as an adjunctive therapy to improve patient access, compliance and subsequent outcomes of rehabilitation efforts. An overview of the designs with comparisons between the different approaches will help future development of these tools. […]

Posted by Kostas Pantremenos in Uncategorized on February 10, 2018

BACKGROUND: Handgrip strength and walking speed predict and influence cognitive function. We aimed to investigate an exercise protocol for improving handgrip strength and walking speed, applied to patients with chronic stroke who had cognitive function disorder.
MATERIAL AND METHODS: Twenty-nine patients with cognitive function disorder participated in this study, and were randomly divided into one of two groups: exercise group (n=14) and control group (n=15). Both groups underwent conventional physical therapy for 60 minutes per day. Additionally, the exercise group followed an exercise protocol for handgrip using the hand exerciser, power web exerciser, Digi-Flex (15 minutes); and treadmill-based weight loading training on their less-affected leg (15 minutes) using a sandbag for 30 minutes, three times per day, for six weeks. Outcomes, including cognitive function and gait ability, were measured before and after the training.
RESULTS: The Korean version of Montreal Cognitive Assessment (K-MoCA), Stroop test (both simple and interference), Trail Making-B, Timed Up and Go, and 10-Meter Walk tests (p<0.05) yielded improved results for the exercise group compared with the control group. Importantly, the K-MoCA, Timed Up and Go, and 10-Meter Walk test results were significantly different between the two groups (p<0.05).
CONCLUSIONS: The exercise protocol for improving handgrip strength and walking speed had positive effects on cognitive function in patients with chronic stroke.

Posted by Kostas Pantremenos in Paretic Hand on April 26, 2017

[Purpose] The aim of this study was to investigate the effects of repeated vibratory stimulation to muscles related to hand functions on dexterity, strength, and sensory function in patients with chronic stroke.

[Subjects and Methods] A total of 10 stroke patients with hemiplegia participated in this study. They were divided into two groups: a) Experimental and b) Control, with five randomly selected subjects for each group. The experimental group received vibratory stimulation, while the control group received the traditional physical therapy. Both interventions were performed for 30 minutes each session, three times a week for four weeks.

[Conclusion] The vibratory stimulation activated the biceps brachii and flexor carpi radialis, which increased dexterity to grasp and lift the box and block from the surface. Therefore, repeated vibratory stimulation to muscles related to hand functions improved hand dexterity equality to the traditional physical therapy in patients with chronic stroke.

Posted by Kostas Pantremenos in Paretic Hand on May 16, 2016

Posted by Kostas Pantremenos in Paretic Hand on October 29, 2015

Upper extremity function, which includes manual dexterity, plays an important role in one’s ability to perform activities of daily living. Dexterity may be reduced for a variety of reasons such as age, injury or disease. Understanding the capabilities of these users is critical to the effective design of products to meet their needs. While normative dexterity data is available for healthy adults, none has been compiled for people with dexterity limitations. The purpose of this study was to measure grip strength, key pinch strength and tip pinch strength in users with limited dexterity and compare them to adult norms. Average strength values were lower in all tests in men and women. It was observed that the dominant hand was strongest in each test in women but not always in men. No strong correlation between age and hand strength was observed. The sample size in this study was small so specific results are hard to generalize. The emergences of clear trends that differ from healthy norms indicate that a wider study may be fruitful.

Source: Comparison of Grip and Pinch Strength in Adults with Dexterity Limitations to Normative Values