Posted by Kostas Pantremenos in Epilepsy on November 13, 2018

Nightwatch bracelet on the arm of a young epilepsy patient.
Credit: LivAssured

A new high-tech bracelet, developed by scientists from the Netherlands detects 85 percent of all severe night-time epilepsy seizures. That is a much better score than any other technology currently available. The researchers involved think that this bracelet, called Nightwatch, can reduce the worldwide number of unexpected night-time fatalities in epilepsy patients. They published the results of a prospective trial in the scientific journal Neurology.

SUDEP, sudden unexpected death in epilepsy, is a major cause of mortality in epilepsy patients. People with an intellectual disability and severe therapy resistant epilepsy, may even have a 20% lifetime risk of dying from epilepsy. Although there are several techniques for monitoring patients at night, many attacks are still being missed.

Consortium researchers have therefore developed a bracelet that recognizes two essential characteristics of severe attacks: an abnormally fast heartbeat, and rhythmic jolting movements. In such cases, the bracelet will send a wireless alert to carers or nurses.

The research team prospectively tested the bracelet, known as Nightwatch, in 28 intellectually handicapped epilepsy patients over an average of 65 nights per patient. The bracelet was restricted to sounding an alarm in the event of a severe seizure. The patients were also filmed to check if there were any false alarms or attacks that the Nightwatch might have missed. This comparison shows that the bracelet detected 85 percent of all serious attacks and 96% of the most severe ones (tonic-clonic seizures), which is a particularly high score.

For the sake of comparison, the current detection standard, a bed sensor that reacts to vibrations due to rhythmic jerks, was tested at the same time. This signalled only 21% of serious attacks. On average, the bed sensor therefore remained unduly silent once every 4 nights per patient. The Nightwatch, on the other hand, only missed a serious attack per patient once every 25 nights on average. Furthermore, the patients did not experience much discomfort from the bracelet and the care staff were also positive about the use of the bracelet.

These results show that the bracelet works well, says neurologist and research leader Prof. Dr. Johan Arends. The Nightwatch can now be widely used among adults, both in institutions and at home. Arends expects that this may reduce the number of cases of SUDEP by two-thirds, although this also depends on how quickly and adequately care providers or informal carers respond to the alerts. If applied globally, it can save thousands of lives.

Materials provided by Eindhoven University of Technology. Note: Content may be edited for style and length.

via New epilepsy warning device could save thousands of lives — ScienceDaily

Abstract
Traditional face to face diagnosis and treatment model has existed for thousands of years between doctors and patients. But now high technologies have brought people great convenience in many fields. When the disabled people concerned, many technologies such as internet, remote sensing, signal processing, Virtual Reality and so on, are already playing an important role in rehabilitation engineering. This paper introduces these emergency new technologies associated with the disabled people and engineers in recent years, which can eliminate the psychological and space distance between disabled people and rehabilitation engineer in high-tech era.

Posted by Kostas Pantremenos in Virtual reality rehabilitation on October 1, 2017

Rohan O’Reilly is a movement therapist in Newcastle, New South Wales, who has been using alternative therapies involving virtual reality devices to help his clients with rehabilitation.

“It really came back to the point of listening to people’s stories who had had large-scale traumas, and their experiences of what they went through, from their initial accident through to therapy,” Mr O’Reilly said.

“For most of them it was really [boring] and quite uncomfortable and not inspiring.

“So we thought ‘We need to make this feel better’.

“Lucky for us we’re living in a time where there’s an amazing new array of technologies that are not widely known about.

“Virtual reality would be the one that’s hot at the moment, and essentially that is a game changer. It’s phenomenal what can be done with that as a platform for putting people in a state where they want to play.”

PHOTO: Rohan O’Reilly says clients put more effort into their therapy when it is meaningful for them. (ABC Newcastle: Robert Virtue)

“It’s about emotions,” he said.

“If your rehabilitation just tended to be based around the fact that you had to pick up an inanimate object, which you had no real emotional connection to, repetitively … for most people, they would think ‘OK, I can do this for a little while’, but they’re quickly going to run out of steam.

“If you put someone in virtual reality with everything that reminds them of the things that they love to do, they’re essentially just going to give themselves therapy.

“We’re just simply creating an environment where they can explore their own capabilities.”

Almost four years ago, Angus McConnell had an accident that changed his life.

He was riding his bicycle down a hill in Newcastle when a car turned across him.

“I hit the windscreen, bumped off down the road, and ended up with a spinal cord injury — a C7 complete quadriplegic,” Mr McConnell said.

“It hits you on and off, and still does.” 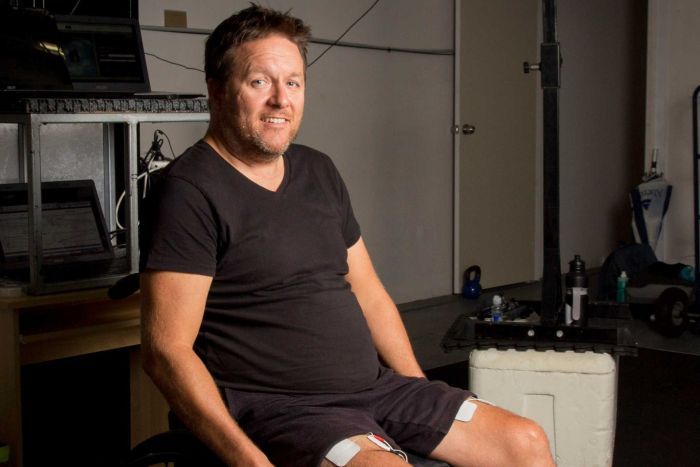 Mr McConnell went through traditional hospital rehabilitation, but was looking for other options to continue his treatment.

Mr McConnell said he had noticed big improvements in his health after the alternative therapy.

“Originally we started on building up the muscles and hopefully a nerve signal that’s coming through,” he said.

“I can feel further down into my body, with electrodes on parts of my body where the nerves come close to the skin.

“I’m standing up now with the help of electrodes, and that’s something I hadn’t thought possible two-and-a-half years ago.”

Academic says VR effective, but people should be cautious

Associate Professor Coralie English, a stroke researcher at the University of Newcastle, said people should approach alternative therapies with a degree of cautiousness.

“There is a reasonable amount of evidence for the effectiveness of virtual reality training for people after stroke,” she said.

“This sort of therapy is useful for people who’ve already got some movement. There’s certainly no evidence to suggest that if you can’t move at all, trying to move within these environments is going to result in any recovery of function.

“It needs to ensure that the person is practising what they need to practice, and that it’s based on a thorough assessment by a qualified health professional.”