Functional electrical stimulation (FES) is capable of activating muscles that are under-recruited in neurological diseases, such as stroke. Therefore, FES provides a promising technology for assisting upper-limb motor functions in rehabilitation following stroke. However, the full benefits of FES may be limited due to lack of a systematic approach to formulate the pattern of stimulation. Our preliminary work demonstrated that it is feasible to use muscle synergy to guide the generation of FES patterns.In this paper, we present a methodology of formulating FES patterns based on muscle synergies of a normal subject using a programmable multi-channel FES device. The effectiveness of the synergy-based FES was tested in two sets of experiments. In experiment one, the instantaneous effects of FES to improve movement kinematics were tested in three patients post ischemic stroke. Patients performed frontal reaching and lateral reaching tasks, which involved coordinated movements in the elbow and shoulder joints. The FES pattern was adjusted in amplitude and time profile for each subject in each task. In experiment two, a 5-day session of intervention using synergy-based FES was delivered to another three patients, in which patients performed task-oriented training in the same reaching movements in one-hour-per-day dose. The outcome of the short-term intervention was measured by changes in Fugl–Meyer scores and movement kinematics. Results on instantaneous effects showed that FES assistance was effective to increase the peak hand velocity in both or one of the tasks. In short-term intervention, evaluations prior to and post intervention showed improvements in both Fugl–Meyer scores and movement kinematics. The muscle synergy of patients also tended to evolve towards that of the normal subject. These results provide promising evidence of benefits using synergy-based FES for upper-limb rehabilitation following stroke. This is the first step towards a clinical protocol of applying FES as therapeutic intervention in stroke rehabilitation.

Muscle activation during movement is commonly disrupted due to neural injuries from stroke. A major challenge for stroke rehabilitation is to re-establish the normal ways of muscle activation through a general restoration of motor control, otherwise impairments may be compensated by the motor system through a substitution strategy of task control [1]. In post-stroke intervention, new technologies such as neuromuscular electrical stimulation (NMES) or functional electrical stimulation (FES) offer advantages for non-invasively targeting specific groups of muscles [2]–[4] to restore the pattern of muscle activation. Nevertheless, their effectiveness is limited by lack of a systematic methodology to optimize the stimulation pattern, to implement the optimal strategy in clinical settings, and to design a protocol of training towards the goal of restoring motor functions. This pioneer study addresses these issues in clinical application with a non-invasive FES technology.

Posted by Kostas Pantremenos in Uncategorized on December 20, 2018

Traumatic brain injury (TBI) consists of acute and long-term pathophysiological sequelae that ultimately lead to cognitive and motor function deficits, with age being a critical risk factor for poorer prognosis. TBI has been recently linked to the development of neurodegenerative diseases later in life including Alzheimer’s disease, Parkinson’s disease, chronic traumatic encephalopathy, and multiple sclerosis. The accumulation of iron in the brain has been documented in a number of neurodegenerative diseases, and also in normal aging, and can contribute to neurotoxicity through a variety of mechanisms including the production of free radicals leading to oxidative stress, excitotoxicity and by promoting inflammatory reactions. A growing body of evidence similarly supports a deleterious role of iron in the pathogenesis of TBI. Iron deposition in the injured brain can occur via hemorrhage/microhemorrhages (heme-bound iron) or independently as labile iron (non-heme bound), which is considered to be more damaging to the brain. This review focusses on the role of iron in potentiating neurodegeneration in TBI, with insight into the intersection with neurodegenerative conditions. An important implication of this work is the potential for therapeutic approaches that target iron to attenuate the neuropathology/phenotype related to TBI and to also reduce the associated risk of developing neurodegenerative disease.

Traumatic brain injury (TBI) is a leading cause of death and disability worldwide, particularly amongst young adults. Ten million individuals are affected by TBI annually, costing a staggering $9–10 billion/year (Gardner et al., 2017). The aged population have a greater risk of sustaining a TBI, with frequent falls being the major cause of injury, and they also have worse outcomes post-injury compared to other age groups (Stocchetti et al., 2012). Aging is also accompanied by a number of co-morbidities which may contribute to poorer outcomes in these individuals following TBI (Stocchetti et al., 2012). Common secondary events that follow the primary impact are neuronal cell death, oxidative stress, brain oedema, blood-brain barrier (BBB) breakdown, and inflammation (Toklu and Tumer, 2015). TBI often results in debilitating long-term cognitive and motor impairments, and there are currently no approved treatments available for TBI patients (Bramlett and Dietrich, 2015). This highlights the need for therapeutic agents that can alleviate brain damage and the deficits caused by the primary injury and more specifically the reversible secondary pathologies that develop after TBI.

Iron homeostasis appears to be an important process in the pathobiology of TBI. Iron is essential for normal brain functioning where it acts as an essential cofactor for several enzymatic/cellular processes (Ke and Qian, 2007). However, impaired regulation of iron can result in the production of reactive oxygen species (ROS) and the consequent promotion of oxidative stress, which can wreak havoc on an already compromised brain in the context of TBI (Nunez et al., 2012). Interestingly, the accumulation of iron in various tissues and cells in the body and brain is an inevitable consequence of aging (Hagemeier et al., 2012; Del et al., 2015). A concomitant increase in the iron storage protein (i.e., ferritin), which can scavenge any excess iron and prevent undesired production of ROS, is also evident with aging (Andersen et al., 2014). However, failed or weakened antioxidant defenses and mitochondrial dysfunction that progresses with aging can disrupt the balance and allow for excessive iron to be released (Venkateshappa et al., 2012a,b; Andersen et al., 2014). This can cause pathological iron overload resulting in cellular damage that is considered to be a contributing factor in several degenerative diseases that are more prevalent with age, such as cancer, liver fibrosis, cardiovascular disease, diabetes (type II), and particularly neurological conditions such as Alzheimer’s disease (AD) (Smith et al., 1997; Kalinowski and Richardson, 2005; Ward et al., 2014; Hare et al., 2016). Abnormal brain iron deposition has also been discovered in other neurodegenerative diseases, such as Parkinson’s disease (PD) (Griffiths et al., 1999; Zhang et al., 2010; Barbosa et al., 2015), multiple sclerosis (MS) (Bergsland et al., 2017), amyotrophic lateral sclerosis (ALS) (Oshiro et al., 2011), Huntington’s disease (Agrawal et al., 2018), and Friedreich’s ataxia (Martelli and Puccio, 2014), and there is now increasing evidence of altered iron levels in TBI patients (Raz et al., 2011; Lu et al., 2015). This raises the interesting proposition of an intersection between aging, iron, TBI and neurodegenerative disease. Whilst the role of iron in TBI is not well known, the literature suggests that the levels of iron (and other metals such as zinc) are abnormally regulated following injury, and that the pharmacological targeting (e.g., using chelators or chaperones) of these metals may be beneficial in improving outcomes. Iron chelation therapy has been approved for decades for the treatment of iron overload conditions, and there is a recent heightened interest for their use in neurodegenerative diseases (Kalinowski and Richardson, 2005; Dusek et al., 2016). Here, we review the role of iron dyshomeostasis in TBI and gain a deeper understanding of its involvement in neurodegeneration as well as neuroinflammation (Figure 1). We further examine the potential benefit of utilizing iron chelation therapy with the hope of limiting iron-induced neurotoxicity in TBI. 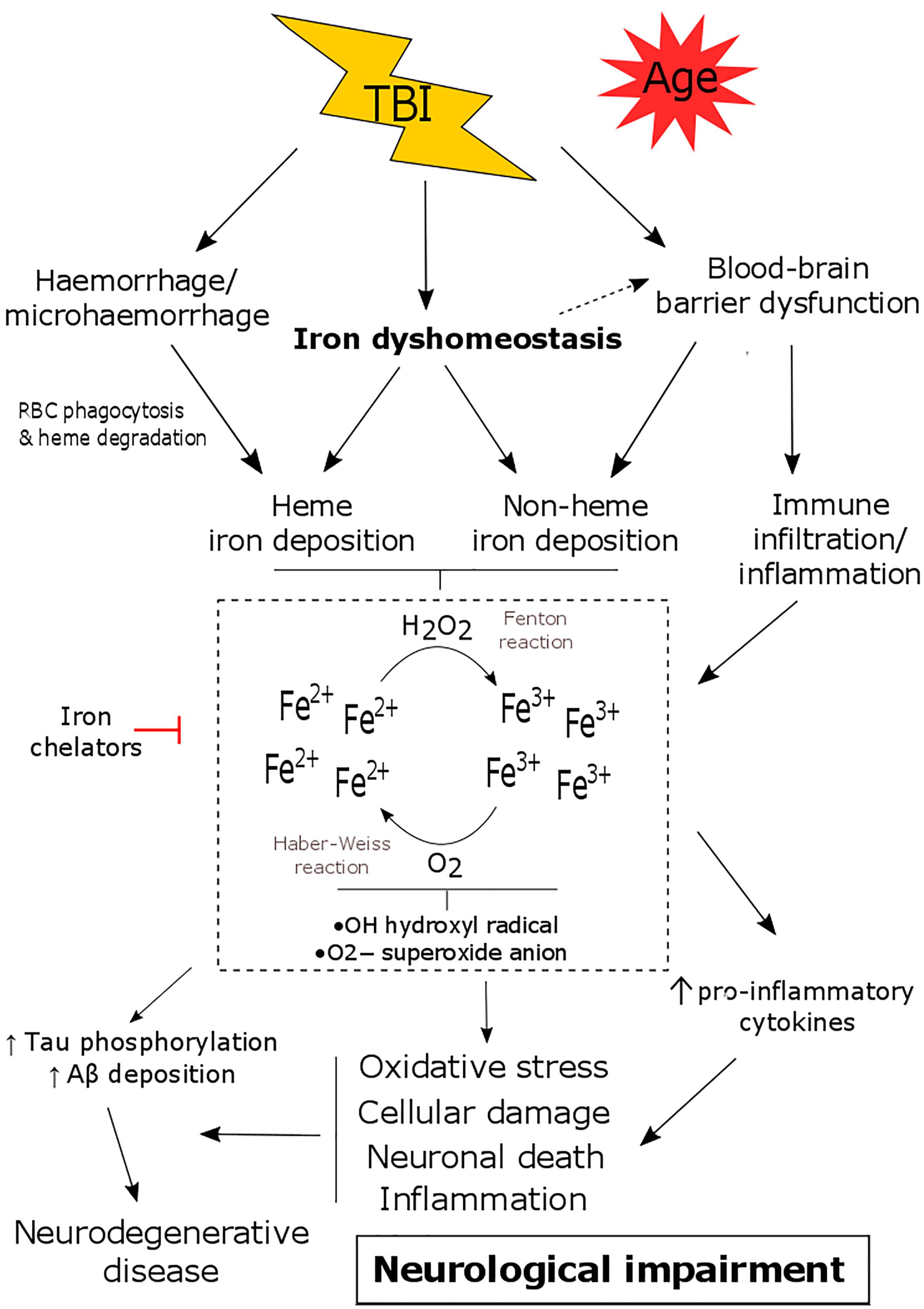 Figure 1. The consequence of iron dyshomeostasis following TBI. TBI results in several secondary events including blood-brain barrier (BBB) breakdown, hemorrhage and iron dyshomeostasis. Together this leads to the accumulation of heme and/or non-heme bound iron in the brain. Iron can participate in Haber-Weiss/Fenton reactions and can promote oxidative stress, neuronal death, inflammation as well as tau phosphorylation/amyloid-β deposition. This contributes to the pathology of TBI, ultimately resulting in neurological decline and an increased risk of developing neurodegenerative disease.

It is evident that the dominant therapy of functional electrical stimulation (FES) for stroke rehabilitation suffers from heavy dependency on therapists experience and lack of feedback from patients status, which decrease the patients’ voluntary participation, reducing the rehabilitation efficacy. This paper proposes a closed loop FES system using surface electromyography (sEMG) bias feedback from bilateral arms for enhancing upper-limb stroke rehabilitation. This wireless portable system consists of sEMG data acquisition and FES modules, the former is used to measure and analyze the subject’s bilateral arm motion intention and neuromuscular states in terms of their sEMG, the latter of multi-channel FES output is controlled via the sEMG bias of the bilateral arms. The system has been evaluated with experiments proving that the system can achieve 39.9 dB signal-to-noise ratio (SNR) in the lab environment, outperforming existing similar systems. The results also show that voluntary and active participation can be effectively employed to achieve different FES intensity for FES-assisted hand motions, demonstrating the potential for active stroke rehabilitation.
Published in: IEEE Sensors Journal ( Early Access ) Date of Publication: 18 June 2018

[Abstract] Combining a hybrid robotic system with a bain-machine interface for the rehabilitation of reaching movements: A case study with a stroke patient

Posted by Kostas Pantremenos in Rehabilitation robotics on December 3, 2016

Reaching and grasping are two of the most affected functions after stroke. Hybrid rehabilitation systems combining Functional Electrical Stimulation with Robotic devices have been proposed in the literature to improve rehabilitation outcomes. In this work, we present the combined use of a hybrid robotic system with an EEG-based Brain-Machine Interface to detect the user’s movement intentions to trigger the assistance. The platform has been tested in a single session with a stroke patient. The results show how the patient could successfully interact with the BMI and command the assistance of the hybrid system with low latencies. Also, the Feedback Error Learning controller implemented in this system could adjust the required FES intensity to perform the task.

Source: Combining a hybrid robotic system with a bain-machine interface for the rehabilitation of reaching movements: A case study with a stroke patient – IEEE Xplore Document

The torque generation capability of muscles often reduces during a functional electrical stimulation (FES) session due to the rapid onset of muscle fatigue. Hybrid rehabilitation systems that use FES and electric motor assist may overcome this issue.

This paper uses a second order sliding mode controller cascaded with a feedback linearization controller for a switched, FES and electric motor, system. The second order sliding mode is achieved through the use of a variable-gain super-twisting algorithm. A Lyapunov stability analysis was used to prove asymptotic stability of the switched control system. Simulations of the developed controller on a hybrid knee extension model illustrate that prolonged knee movements can be elicited through the switched system.