Posted by Kostas Pantremenos in Paretic Hand, REHABILITATION on September 23, 2019

To demonstrate the feasibility of algorithmic prediction utilizing a model of baseline arm movement, genetic factors, demographic characteristics, and multi-modal assessment of the structure and function of motor pathways. To identify prognostic factors and the biological substrate for reductions in arm impairment in response to repetitive task practice.

This prospective single-group interventional study seeks to predict response to a repetitive task practice program using an intent-to-treat paradigm. Response is measured as a change of ≥5 points on the Upper Extremity Fugl-Meyer from baseline to final evaluation (at the end of training).

Anticipated enrollment of 96 community-dwelling adults with chronic stroke (onset ≥6 months) and moderate to severe residual hemiparesis of the upper limb as defined by a score of 10-45 points on the Upper Extremity Fugl-Meyer.

The intervention is a form of repetitive task practice using a combination of robot-assisted therapy coupled with functional arm use in real-world tasks administered over 12 weeks.

Methods for this trial are outlined and an illustration of inter-individual variability is provided by example of two participants who present similarly at baseline but achieve markedly different outcomes.

This article presents the design, methodology, and rationale of an ongoing study to develop a predictive model of response to a standardized therapy for stroke survivors with chronic hemiparesis. Applying concepts from precision medicine to neurorehabilitation is practicable and needed to establish realistic rehabilitation goals and to effectively allocate resources.

In this study an exoskeleton is designed for hand in therapeutic rehabilitation. The mechanical design is manufactured in consideration of anthropometrical measurements of the hand studied from literature. Kinematic model of the hand exoskeleton was obtained by results of position, velocity and torque-moment analysis.
The exoskeleton has a single degree of freedom (DOF) for the PIP and MCP joints. Basic four-bar linkage mechanisms are used in the exoskeleton. With this design, while movements (flexion and extension) occurs in both joints at the same time, angular displacement come out as in healthy hands. Linkage lengths are optimized to achieve the targeted angular dynamics. The manipulation of the exoskeleton is actuated by a linear
servo motor. 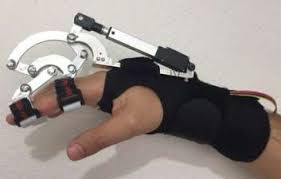 Abstract
The aim of this study is to investigate the capability of a 6 DoF parallel robot to perform various rehabilitation exercises. The foot trajectories of twenty healthy participants have been measured by a Vicon system during the performing of four different exercises. Based on the
kinematics and dynamics of a parallel robot, a MATLAB program was developed in order to calculate the length of the actuators, the actuators’ forces, workspace and singularity locus of the robot during the performing of the exercises. The calculated length of the actuators and
the actuators’ forces were used by motion analysis in SolidWorks in order to simulate different foot trajectories by the CAD model of the robot. A physical parallel robot prototype was built in order to simulate and execute the foot trajectories of the participants. Kinect camera was used to track the motion of the leg`s model placed on the robot. The results demonstrate the robot’s capability to perform a full range of various rehabilitation exercises.
1. Introduction
Stroke is a leading cause of death [1] and it is also a leading cause of chronic disability with
100,000 patients having their first stroke annually in the UK. Although the rate of mortality
due to stroke has been falling, the prevalence of stroke is expected to increase in the future
due to the aging population [2]. The improvement of motor recovery and motor plasticity of a
patient along specific patterns is the aim of rehabilitation exercises [3-6]. The use of robotic
technology in rehabilitation can accelerate the treatment and recovery of the disabled and it
actuates the rehabilitation clinics to change their path from labour-intensive operations to
technology–assisted operations [7]. Emerging robotic technology in a traditional
rehabilitation therapy session would provide high quality treatment at a lower cost and effort.
The level of motor recovery of patients can be quantified by defining different rehabilitation
exercises for the robot [8].
Different lower limb rehabilitation-assisting robots have been developed to revive the
functional mobility of damaged limbs, ranging from complex computerized stations to simple
structures. These systems have been categorized in five different groups:

In some studies resistive force has been provided
during exercise and haptic simulation has been interacted with VR simulation [9,10]. Using a
6DoF parallel robot is an applicable method for lower limb rehabilitation due to its simple
configuration and high flexibility in performing a different range of motions [10]. Rutgers is
one of the pioneering ankle rehabilitation devices and its developments have been cited in
eight different studies [11-17]. In another study, a high performance 2DoF over-actuated
parallel mechanism has been designed and built for ankle rehabilitation based on custom
designed backdrivable actuators and an impedance control system [19-21]. In another study,
the prototype of a 3-RSS/S parallel mechanism has been produced for ankle rehabilitation
application [21, 22], but no clinical trials have been found for this system.
To develop the robotic devices, first the motor learning and motor adaption of healthy people
should be investigated; and then the neurologically injured patients can be rehabilitated with
respect to the obtained results [23, 24]. Therapeutic exercises can vary from range of motion,
active assistive isotonic, isometric, isokinetic and manual exercises [25-27]. The path
planning of a hybrid parallel robot for ankle rehabilitation was investigated based on inverse
kinematics during normal walking and stepping [28-30]. The 6DoF parallel robot is stiffer
than a tripod as it employs an extra three actuators [31]; hence it requires actuators with lower
load capacity.
There has been multiple clinically-evaluated systems using Kinect, but the majority are being
used for upper limb rehabilitation, as seen in [32-34]. Kinect would only be a viable
alternative to current red, green, blue, depth (RGB-D) cameras if it provided accuracy that
was comparable. In [35] they investigated the accuracy of Kinect by comparing it to a Vicon
camera, which is a very precise, but expensive and bulky, marker-based motion capture
system. In [35] Kinect is distanced between 1.0m and 3.0m from the targets and the RMS
errors between the Kinect and Vicon system are all below 10mm. In [36] it is reported that
although Kinect had varied success depending on the activity being done, there was still a
good overall relationship between the results of the Kinect and the Vicon system for most
movements. In [37] the Kinect is once again compared to the Vicon system, but this time it is
tracking elderly persons’ foot movements; it is reported that it provides acceptable accuracy
in measuring variation in stride velocity [38].
In this paper the healthy participants’ data has been used to evaluate the capability of a 6 DoF
parallel robot during four various rehabilitation exercises. The performance of the robot
based on real patient data during normal walking will be investigated in a separate research
study. The aim of this study is to investigate and evaluate different characteristics of the
parallel robot during the performance of different exercises for the rehabilitation of a lower
limb. The CAD model and a physical prototype of a 6DoF robot have been designed and built
to simulate the predefined foot trajectories of healthy subjects. All of the required force will
be supplied by the actuators during the performing of the exercises. A Kinect camera was
used as a depth motion sensor to detect the position of the robot`s end effector during its movements.

Abstract
The aim of this study is to investigate the performance of a 6 DoF parallel robot in tracking the movement of the foot trajectory of a paretic leg during a single stride. The foot trajectories of nine patients with a paretic leg including both males and females have been measured and analysed by a Vicon system in a gait laboratory. Based on kinematic and dynamic analysis of a 6 DoF UPS parallel robot, an algorithm was developed in MATLAB to calculate the length of the actuators and their required forces during all trajectories. The work space and singularity points of the robot were then investigated in nine different cases. A 6 DoF UPS parallel robot prototype with high repeatability was designed and built in order to simulate a single stride. Results showed that the robot was capable of tracking all of the trajectories with the maximum position error of 1.2mm.

Posted by Kostas Pantremenos in Paretic Hand on December 11, 2015

The development of feasible kinematic assessment methods of upper extremity motor function impairment after stroke is clinically extremely important in physiotherapy and rehabilitation engineering. Microsoft Kinect has a potential of a low-cost and compact solution for clinical based assessment of the upper limb motor function after stroke. However, the reliability of Microsoft Kinect in the upper limb motor function assessment has not been well established. Therefore, there is a hesitation in usage of Microsoft Kinect for clinical applications. It is expected that any measurement procedure has the capability to differentiate between pathological and normal performance. On the other hand, the identification of the kinematic metrics that best evaluate impairment of upper-extremity motor function is a key problem of any measurement protocol. Primary objective of our study is, by differentiating pathological performance from the healthy performance and identifying the kinematic metrics that best evaluate the impairment, to demonstrate the robustness/usability of Microsoft Kinect in kinematic analysis of motor performance of stroke patients. We compared the kinematic metrics of the forward reaching movement obtained data recorded from Microsoft Kinect between three stroke patients and two healthy subjects based on the Principal Component Analysis (PCA). In the study, we have defined a new inter-joint coordination index (IJCI) based on PCA to capture inter-joint coordination dynamic of reaching movement in addition to other metrics those have been previously defined and used in literature to quantify upper limb impairment. We observed that the IJCI has significant importance to detect impairment of upper-extremity motor function during a forward reaching task and to discriminate stroke patients from healthy controls.

We hope that this paper will promote the acceptance of objective kinematic analysis into routine rehabilitation practices.