[Abstract + References] Therapeutic Drug Monitoring of Antiepileptic Drugs in Women with Epilepsy Before, During, and After Pregnancy – Review

Posted by Kostas Pantremenos in Epilepsy, Pharmacological on January 11, 2020

via Therapeutic Drug Monitoring of Antiepileptic Drugs in Women with Epilepsy Before, During, and After Pregnancy | SpringerLink

Posted by Kostas Pantremenos in Pharmacological, TBI on June 20, 2019

Traumatic brain injury (TBI) is a major cause of death and disability. Despite its importance in public health, there are presently no drugs to treat TBI. Many reasons underlie why drugs have failed clinical trials, one reason is that most drugs to treat TBI lose much of their efficacy before patients are first treated. This review discusses the importance of therapeutic time window; the time interval between TBI onset and the initiation of treatment. Therapeutic time window is complex, as brain injury is both acute and chronic, resulting in multiple drug targets that appear and disappear with differing kinetics. The speed and increasing complexity of TBI pathophysiology is a major reason why drugs lose efficacy as time to first dose increases. Recent Phase III clinical trials treated moderate to severe TBI patients within 4–8 h after injury, yet they turned away many potential patients who could not be treated within these time windows. Additionally, most head trauma is mild TBI. Unlike moderate to severe TBI, patients with mild TBI often delay treatment until their symptoms do not abate. Thus, drugs to treat moderate to severe TBI likely will need to retain high efficacy for up to 12 h after injury; drugs for mild TBI, however, will likely need even longer windows. Early pathological events following TBI progress with similar kinetics in humans and animal TBI models suggesting that preclinical testing of time windows assists the design of clinical trials. We reviewed preclinical studies of drugs first dosed later than 4 h after injury. This review showed that therapeutic time window can differ depending upon the animal TBI model and the outcome measure. We identify the few drugs (methamphetamine, melanocortin, minocycline plus N-acetylcysteine, and cycloserine) that demonstrated good therapeutic windows with multiple outcome measures. On the basis of their therapeutic window, these drugs appear to be excellent candidates for clinical trials. In addition to further testing of these drugs, we recommend that the assessment of therapeutic time window with multiple outcome measures becomes a standard component of preclinical drug testing.

Despite decades of research, there are currently no treatments for TBI other than palliative care (Diaz-Arrastia et al., 2014). The reasons for the lack of therapeutics are many; drug may have failed in clinical trials since most preclinical studies dose drugs immediately or soon after experimental TBI (Diaz-Arrastia et al., 2014). This experimental design fails to take into account the well-documented clinical phenomenon of treatment gap: the time individuals wait before seeking medical care after head trauma (Tanielian and Jaycox, 2008; Demakis and Rimland, 2010). In 1991, one quarter of an estimated 1.5 million patients in America did not seek medical care after receiving a TBI that did not result in death or long-term institutionalization (Sosin et al., 1996). The multiple reasons given to postpone or avoid treatment include perceived symptom resolution, as well as the time and cost of treatment (Demakis and Rimland, 2010). Military personnel are particularly at risk for TBI. Lack of access to safe and accessible transportation for deployed military personnel can delay treatment up to 72 h after TBI (Farmer et al., 2017). Thus, treatment gap likely contributes to negative outcomes after TBI. Despite the importance of treatment gap, we know relatively little about the time course of pathophysiological events that can be successfully targeted with drugs first dosed many hours to days following TBI.

The treatment of thromboembolic stroke using tissue plasminogen activator illustrates the importance of time window in neurodegenerative diseases with a rapid onset. Thromboembolic stroke produces a complex and rapidly evolving injury with an overlapping, yet distinct, pathophysiology to TBI. Tissue plasminogen activator (t-PA) is highly effective if dosed within 4.5 h of a stroke, yet its utility drops sharply after 4.5 h due to the increased probability of hemorrhage (Ahmed et al., 2013). Despite its established ability to prevent injury, only 2–5% of stroke patients receive t-PA (Miller et al., 2011). A major reason for the limited use of t-PA is its short time window (Miller et al., 2011). The experience of clinicians with t-PA to treat stoke suggests similar difficulties will arise if drugs to treat TBI have similarly short therapeutic time windows that fall off sharply.

Since no drug has received FDA-approval, a key unanswered question is: what is a clinically relevant therapeutic window for a TBI drug? Clinical trials at designated trauma centers have enrolled patients 4–7 h after a moderate to severe TBI. Even with the high skill of the clinical staff at these trauma centers; many patients could not be enrolled because treatment could not be initiated within 4–7 h. Less specialized hospitals are likely to have even longer treatment delays. To treat the largest number of patients, a drug or drug combination will likely need to retain high efficacy when first dosed 12 h after moderate to severe TBI. In contrast to those with severe or moderate TBI, patients with mild TBI often delay seeking medical help for days after injury until their symptoms do not abate (Sosin et al., 1996; Tanielian and Jaycox, 2008; Demakis and Rimland, 2010). Thus, drugs will need to retain efficacy when dosed days after injury to treat large numbers of patients with mild TBI.

The importance of therapeutic time window in treating TBI is illustrated by comparing the preclinical testing of progesterone and CDP-choline with the design of Phase III clinical trials testing the same drugs. Progesterone was tested in two recent Phase III trials for TBI. The PROTECT III trial (NCT00822900) recruited patients with moderate to severe TBI (Glasgow Coma Score 4–12) within 4 h post-injury while the SYNAPSE trial (NCT01143064) recruited patients with severe TBI (Glasgow Coma Score < 7) within 7 h (Skolnick et al., 2014; Wright et al., 2014). Both trials were unable to demonstrate a therapeutic effect for progesterone. Prior to Phase III testing, numerous laboratories demonstrated a diverse set of therapeutic effects of progesterone in multiple rodent TBI models (Stein and Sayeed, 2018). Progesterone reduced glutamate release, prevented vasogenic edema, restored the blood brain barrier, improved aerobic respiration, and increased myelin and neurotrophin synthesis. Most importantly, progesterone reduced brain damage and improved multiple functional outcomes. Few drugs have had such wide preclinical testing on so many therapeutic outcomes. Virtually all of these studies, however, first dosed progesterone within 1 h or less after injury (Stein and Sayeed, 2018). Only three studies dosed progesterone between 4 and 6 h after injury and none of these studies performed a careful analysis of how the efficacy of progesterone changed after injury (Peterson et al., 2012, 2015). A first dose of progesterone 4 h after experimental TBI decreased gray matter damage, improved motor function and limited astrocyte activation (Peterson et al., 2012, 2015). A first dose at 6 h produced small improvements on expression of Nogo-A, GFAP, and GAP-43 (Liu et al., 2014). None of these studies examined multiple therapeutic time windows so it remains unknown how the efficacy of progesterone changed with increasingly longer times to first dose. A study of a first dose of progesterone 1 or 6 h post-stroke showed good retention of drug efficacy in a rat cerebral ischemia model (Yousuf et al., 2014). Little is understood, however, of how the analysis of therapeutic time window in animal models of stroke tells us whether an equivalent therapeutic window exists for TBI. The PROTECT III and SYNAPSE trials provided important information of how rapidly we could recruit and treat patients after moderate to severe TBI, however, due to the lack of appropriate preclinical testing, we do not know if progesterone retained sufficient potency to treat TBI when first dosed at 4–7 h after injury.

The Phase 3 COBRIT study tested the efficacy of CDP-choline on mild, moderate and severe TBI (Zafonte et al., 2012). Most patients (86%) received drugs within the first 24 h after injury. The COBRIT study did not show improvement in any outcome measures. Compared to progesterone, there was relatively little preclinical testing of CHP-choline. Dixon et al. showed that a first dose of CDP-choline beginning 24 h after injury produced mild improvements on beam balance and beam walk, and on acquisition of Morris water maze (Dixon et al., 1997). Two additional studies that dosed CDP-choline immediately after injury reported decreased lesion volume, increased neuroprotection, improvements in neurological tests, edema and protection of the blood brain barrier (Başkaya et al., 2000; Dempsey and Raghavendra Rao, 2003). A potential hypothesized mechanism of action of CDP-choline was to improve lipid metabolism, yet no study examined whether CDP-choline limited white matter injury. As with progesterone, there are no studies examining the efficacy of CDP-choline at different therapeutic time windows. Thus, inadequate drug potency at the time when patients were treated may have contributed to the futility of the PROTECT III, SYNAPSE, and COBRIT trials.

TBI Pathophysiology is a Major Determinant of Therapeutic Time Window

Are Studies of Therapeutic Time Window in Animal Models Relevant to Human TBI? 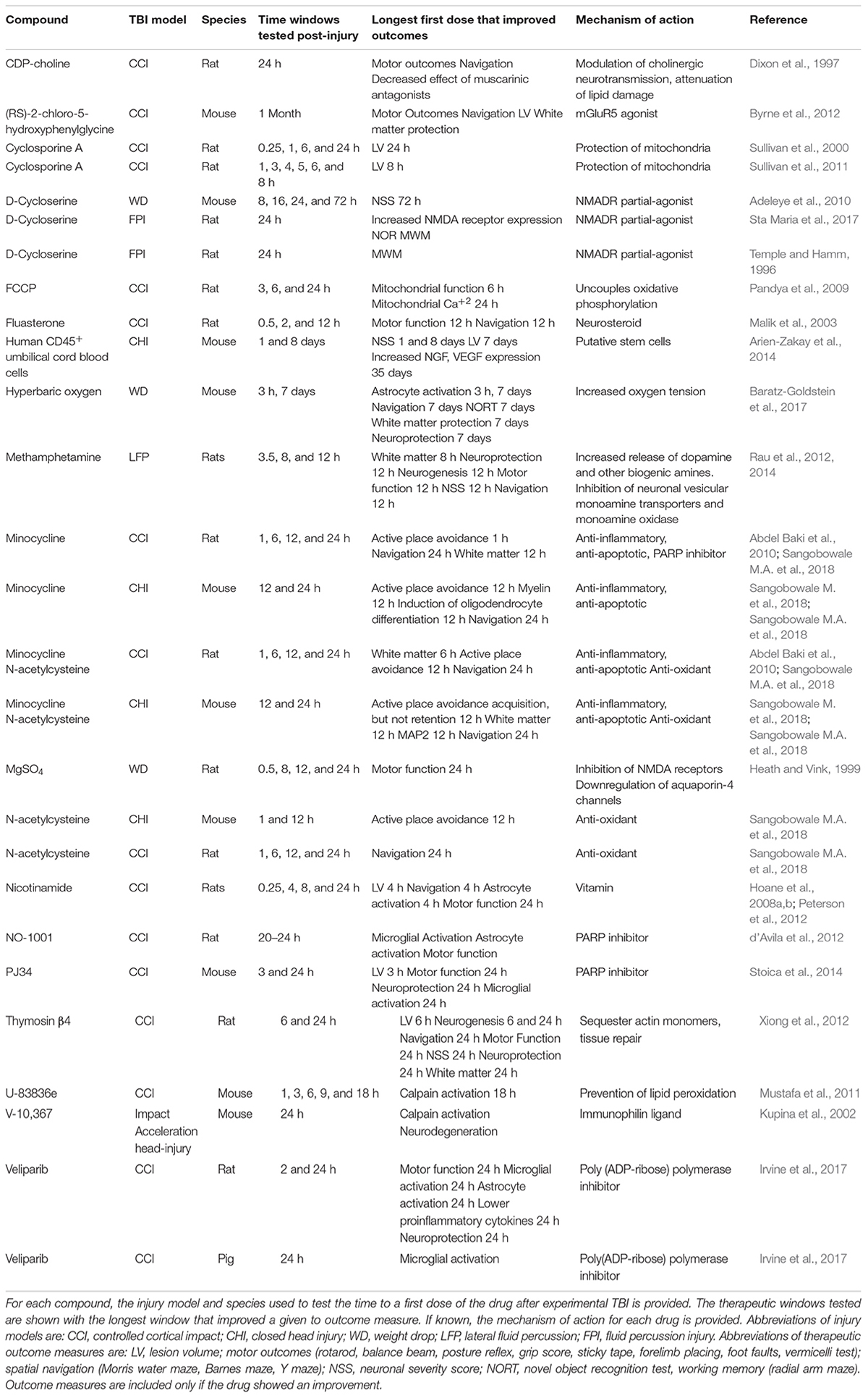 Table 1. Drugs with a therapeutic time window of 12 h or greater in animal models of TBI.

Posted by Kostas Pantremenos in Pharmacological on April 13, 2019

The purpose of this review is to highlight the pharmacological barrier to drug development for traumatic brain injury (TBI) and to discuss best practice strategies to overcome such barriers. Specifically, this article will review the pharmacological considerations of moving from the disease target “hit” to the “lead” compound with drug-like and central nervous system (CNS) penetrant properties. In vitro assessment of drug-like properties will be detailed, followed by pre-clinical studies to ensure adequate pharmacokinetic and pharmacodynamic characteristics of response. The importance of biomarker development and utilization in both pre-clinical and clinical studies will be detailed, along with the importance of identifying diagnostic, pharmacodynamic/response, and prognostic biomarkers of injury type or severity, drug target engagement, and disease progression. This review will detail the important considerations in determining in vivo pre-clinical dose selection, as well as cross-species and human equivalent dose selection. Specific use of allometric scaling, pharmacokinetic and pharmacodynamic criteria, as well as incorporation of biomarker assessments in human dose selection for clinical trial design will also be discussed. The overarching goal of this review is to detail the pharmacological considerations in the drug development process as a method to improve both pre-clinical and clinical study design as we evaluate novel therapies to improve outcomes in patients with TBI.

Posted by Kostas Pantremenos in Pharmacological, Spasticity on February 21, 2016

Introduction: Post-stroke spasticity is a disabling neurological condition and may have a significant impact on quality of life. Ability to carry out activities of daily living is often compromised and painful contractures in the affected limbs may also develop. The prevalence of spasticity may be as high as 40% within the first year after the initial stroke event. Management of this condition focuses on improving muscle tone, function and pain. IncobotulinumtoxinA is effective in treating focal spasticity.
Areas covered: This review will summarize outcomes from incobotulinumtoxin A phase III trials in upper limb spasticity. Pharmacodynamics and pharmacokinetics will also be discussed along with future studies and possible indications. Literature searches used for this review include; PubMed and http://www.clinicaltrials.gov searches. Congress abstracts and case reports are not included.
Expert opinion: IncobotulinumtoxinA, is a 150 kiloDalton neurotoxin without complexing proteins and is well tolerated in patients with spasticity. There is an 80% improvement reported i spasticity and disability in several phase III studies. In the future, higher doses for upper and lower limb spasticity may be considered. Antibody formation does not seem to limit the administration of higher doses. Prospective studies are evaluating the efficacy of incobotulinumtoxin in children and adolescents with cerebral palsy. Furthermore, the clinical efficacy and immunogenic status of other botulinum neurotoxin A subtypes are currently under investigation.

Source: Pharmacokinetics and pharmacodynamics of incobotulinumtoxin A influencing the clinical efficacy in post-stroke spasticity – Expert Opinion on Drug Metabolism & Toxicology –