Posted by Kostas Pantremenos in Rehabilitation robotics on December 9, 2018

At the Swiss Federal Institute of Technology in Lausanne, professor Auke Ijspeert and its team use robots as a scientific tool to better understand mobility in living beings and explore the secret of the spinal cord 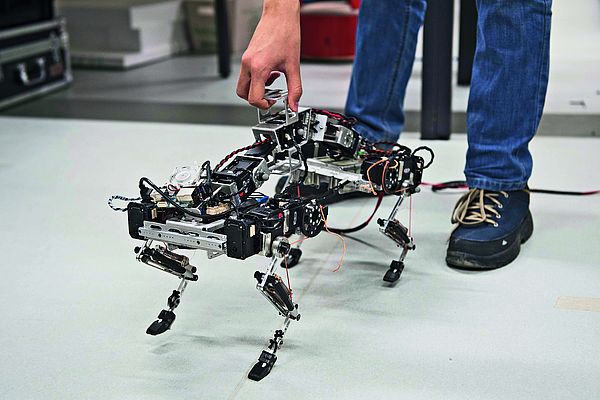 Brushing teeth, making coffee, unlocking a door – our brain is the central processing unit for many physical movements. This might make you think that without the brain, nothing would happen at all. But that’s not quite true. When a doctor uses a small hammer to tap our knee, we experience a reflexive kick of the lower leg. And when we accidentally touch a hot stovetop, our hand will jerk back immediately. It’s not the brain that’s responsible for such movements, but another part of the central nervous system: the spinal cord. A headless chicken is, albeit somewhat morbid, proof of the fact that a living creature is able to move without a brain. The chicken flaps and runs about for several seconds even after its head has been severed from the body.

But how do these motor circuits in the spine work? What are the underlying control mechanisms for the movement of vertebrates? This is just one of the questions investigated by Auke Ijspeert’s team of 17 at the EPFL in Lausanne. The scientists chose a somewhat unusual approach for their research – they’re building robots. That also explains the name of their work place: Biorobotics Laboratory, or Biorob for short. “We use robots as a scientific tool to help us better understand mobility in living beings,” explains Auke Ijspeert. It’s not so much about building a robot that looks spectacular or is able to work autonomously: “With our robots, we want to contribute to research in the neurosciences and biomechanics.”

Evolutionary biology also benefits from the team’s work. “In many animals, motor control happens mostly in the spinal cord. I find that fascinating.”

The Pleurobot by Auke Ijspeert and his team attracted particular attention. What at first glance looks like a paleontological skeleton assembly kit is actually a sophisticated reproduction of a salamander’s musculoskeletal system. Watching the Pleurobot, which is powered by 27 motors, move in water or on land leaves the observer in awe. The similarity to a salamander’s natural movement is remarkable. The Biorob team made every effort to design the Pleurobot to be as similar to a salamander as possible: They used 3D X-ray videos to analyze every limb of a salamander in motion. This was followed by meticulous mechanical and motor function calculations.

THE BRAIN DOES NOT HAVE SOLE CONTROL

It’s no coincidence that biomechanical research focuses on amphibians. Their locomotor system is interesting because it permits studying the gradual transition of movement on land and in water. Several years ago, neurobiologists were able to show that salamanders can be “remote controlled” by stimulating their spinal cord. Weak electrical stimulation lets the salamander walk; increasing the stimulus beyond a certain threshold results in the salamander performing its typical swimming movements. This ultimately means that the salamander’s brain is not fully in control of the locomotor system. In fact, the spinal cord and limbs form an almost autonomous control and locomotor system. “The brain merely has a stimulating function,” says Auke Ijspeert. The Pleurobot follows this functional principle: Transitioning from walking to swimming movements requires only an increase in the electrical current. “When we control the Pleurobot remotely, we don’t need to control each individual motor. Similar to the brain of a salamander, we only determine the direction, the speed, and the intensity of the stimulus.” The function of the spinal cord in the Pleurobot is assumed by a microcontroller which – put simply – has been programmed with mathematical models of a salamander’s spinal neural network.

THE USE OF ROBOTS TO UNDERSTAND THE NERVOUS SYSTEM

But why go to all this effort? “Our interest is to fundamentally understand how the nervous system in a spinal column functions,” explains Auke Ijspeert. It’s a very complex subject that has by no means been exhaustively researched. The spinal cord’s well-protected location in the canal of the vertebral column in particular makes it very difficult to measure its neuronal activity – even more so than the activity of the brain itself. “You can’t just stick some electrodes into the spinal cord of a moving animal and measure what’s happening.” One reason why Auke Ijspeert likes this combination of biology and robotics is that other scientific disciplines benefit from it. A fundamental understanding of movement can help in the manufacture of neuroprosthetics, for example. Discoveries in the fields of neuronal systems and the spinal cord are incorporated into research work on new paraplegia therapies.

With its Envirobot – a snake-like swimming robot – the EPFL team have also developed and built an inspection robot. It can be used to detect and measure water pollution, for example.

But Auke Ijspeert’s team researches much more than amphibian robots. A cat-like robot named Cheetah and humanoid robots are also part of the lab’s inventory. For many of its projects, including the Pleurobot, the Biorobotics Laboratory uses DC motors from maxon. The modular Dynamixel actuators by Robotis are used mainly in robotics projects. These modules mainly incorporate maxon RE-max motors, the tried and tested brushed motors with an ironless winding. Auke Ijspeert compliments the Swiss drive specialist: “We like maxon a lot!”