Stroke is one of the most common causes of acquired disability, leaving numerous adults with cognitive and motor impairments, and affecting patients’ capability to live independently. Virtual Reality (VR) based methods for stroke rehabilitation have mainly focused on motor rehabilitation but there is increasing interest toward the integration of cognitive training for providing more effective solutions. Here we investigate the feasibility for stroke recovery of a virtual cognitive-motor task, the Reh@Task, which combines adapted arm reaching, and attention and memory training. 24 participants in the chronic stage of stroke, with cognitive and motor deficits, were allocated to one of two groups (VR, Control). Both groups were enrolled in conventional occupational therapy, which mostly involves motor training. Additionally, the VR group underwent training with the Reh@Task and the control group performed time-matched conventional occupational therapy. Motor and cognitive competences were assessed at baseline, end of treatment (1 month) and at a 1-month follow-up through the Montreal Cognitive Assessment, Single Letter Cancelation, Digit Cancelation, Bells Test, Fugl-Meyer Assessment Test, Chedoke Arm and Hand Activity Inventory, Modified Ashworth Scale, and Barthel Index. Our results show that both groups improved in motor function over time, but the Reh@Task group displayed significantly higher between-group outcomes in the arm subpart of the Fugl-Meyer Assessment Test. Improvements in cognitive function were significant and similar in both groups. Overall, these results are supportive of the viability of VR tools that combine motor and cognitive training, such as the Reh@Task. Trial Registration:This trial was not registered because it is a small clinical study that addresses the feasibility of a prototype device.

Stroke is one of the most common causes of adult disability and its prevalence is likely to increase with an aging population (WHO, 2015). It is estimated that 33–42% of stroke survivors require assistance for daily living activities 3–6 months post-stroke and 36% continue to be disabled 5 years later (Teasell et al., 2012). Loss of motor control and muscle strength of the upper extremity are the most prevalent deficits and are those that have a greater impact on functional capacity (Saposnik, 2016). Hence, its recovery is fundamental for minimizing long-term disability and improving quality of life. In fact, most rehabilitation interventions focus on facilitating recovery through motor learning principles (Kleim and Jones, 2008). However, learning engages also cognitive processes such as attention, memory and executive functioning, all of which may be affected by stroke (Cumming et al., 2013). Still, conventional rehabilitation methodologies are mostly motor focused, although 70% of patients experience some degree of cognitive decline (Gottesman and Hillis, 2010), which also affects their capability to live independently (Langhorne et al., 2011).[…] 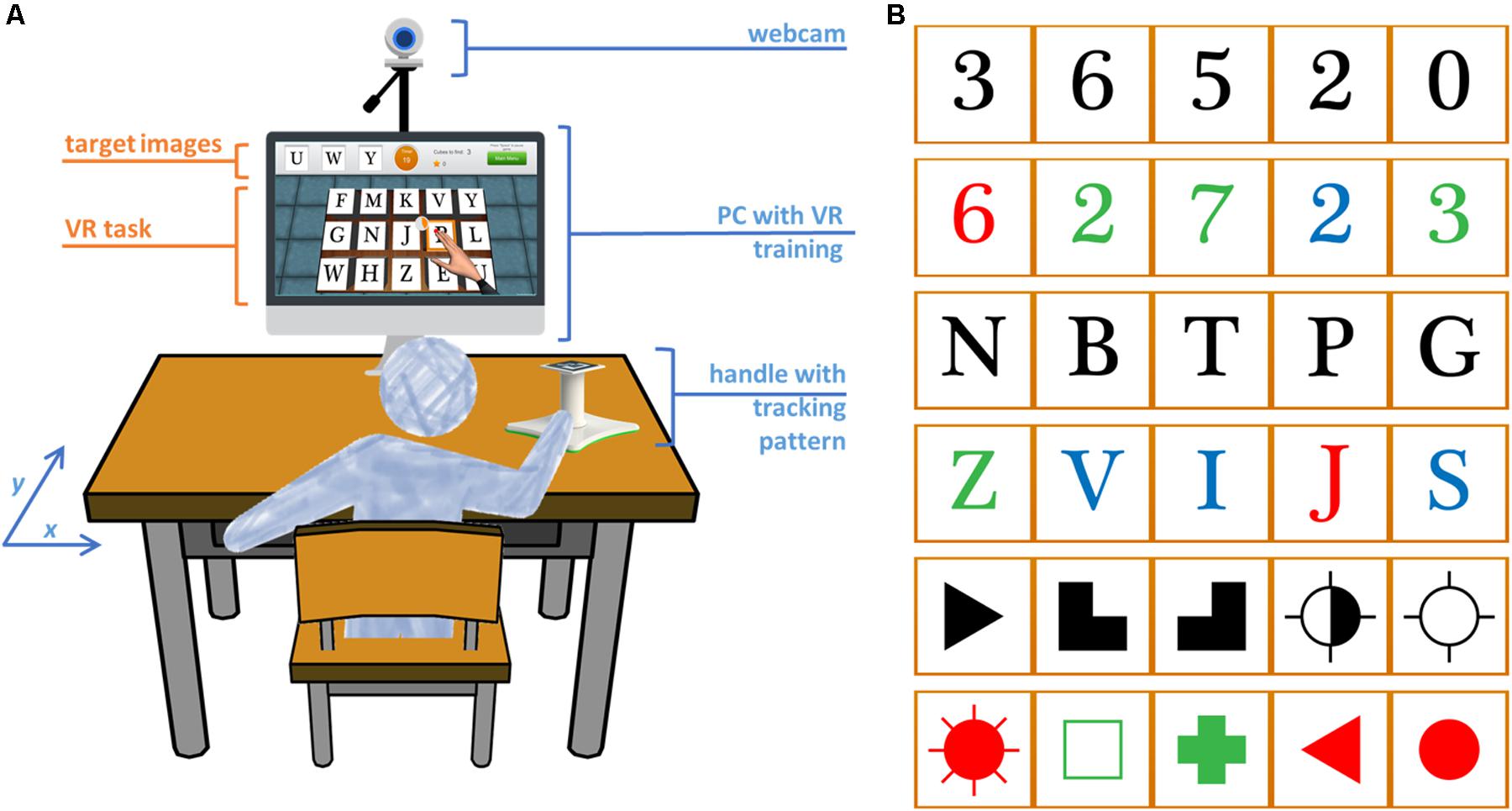 FIGURE 1. Experimental setup and VR task. (A) The user works on a tabletop and arm movements are captured by augmented reality pattern tracking. These movements are mapped onto the movements of a virtual arm on the screen for the execution of the cancelation task. (B) The target stimuli can be letters, numbers, and symbols in black or different colors. The target stimuli in this picture are ordered by increasing complexity.