Posted by Kostas Pantremenos in Epilepsy on September 27, 2018

In the last several decades, sleep-related epilepsy has drawn considerable attention among epileptologists and neuroscientists in the interest of new paradigms of the disease etiology, pathogenesis and management. Sleep-related epilepsy is nocturnal seizures that manifest solely during the sleep state. Sleep comprises two distinct stages i.e., non-rapid eye movement (NREM) and rapid eye movement (REM) that alternate every 90 min with NREM preceding REM. Current findings indicate that the sleep-related epilepsy manifests predominantly during the synchronized stages of sleep; NREM over REM stage. Sleep related hypermotor epilepsy (SHE), benign partial epilepsy with centrotemporal spikes or benign rolandic epilepsy (BECTS), and Panayiotopoulos Syndrome (PS) are three of the most frequently implicated epilepsies occurring during the sleep state. Although some familial types are described, others are seemingly sporadic occurrences. In the present review, we aim to discuss the predominance of sleep-related epilepsy during NREM, established familial links to the pathogenesis of SHE, BECTS and PS, and highlight the present available pharmacotherapy options.

Epilepsy is characterized by frequent and unpredictable disruptions of brain functions resulting in “epileptic seizures.” Epilepsy has a great impact on the quality of life through increased incidence of injury and death, unemployment rates, lower monthly incomes, higher household costs and high absenteeism at work and schools (Jennum et al., 2017; Trinka et al., 2018; Wibecan et al., 2018). An epileptic seizure is considered as a transient episode of signs or symptoms, including transitory confusion, staring speech, irrepressible jerking movements, loss of consciousness, psychic symptoms such as fear and anxiety, due to the abnormal synchronous neuronal activity of the brain. The International League Against Epilepsy (ILAE) published a recent clinical definition of epilepsy in which a patient with any of the following conditions is considered to be an epileptic i.e., (i) two or more unprovoked seizures within more than 24 h apart; (ii) one unprovoked seizure and a probability of further seizures similar to the general recurrence risk, occurring over the next 10 years; (iii) definite diagnosis of an epilepsy syndrome (Fisher et al., 2014). Genesis of epilepsy is attributed to various predispositions that include neurological, perceptive, psychological, and social factors, which could either stimulate or worsen the syndrome. In early 2017, the point prevalence of active epilepsy was found to be 6.38/1,000 individuals, while the lifetime prevalence was 7.60/1,000 persons. Meanwhile, the annual cumulative incidence of epilepsy was 67.77/100,000 persons and the incidence rate was 61.44/100,000 person-years. The active annual prevalence, prevalence during lifetime and the incidence of epilepsy were found to be higher in the developing countries (Fiest et al., 2017).

Sleep deprivation is very common among the epileptic patients and lack of sleep could worsen the seizure expressions (Neto et al., 2016). In animal models, sleep deprivation was shown to heighten the propensity to seizures (McDermott et al., 2003). Sleep deprivation has been correlated with decline in various aspects of brain functional connectivity (Nilsonne et al., 2017). Generally, sleep deprivation is secondary to other factors such as illness, emotional or psychological stress, and alcohol use. Hence, lack of sleep alone may not be sufficient to cause seizures (Razavi and Fisher, 2017). A large body of literature on the effects of epilepsy on sleep and/or sleep-deprivation on the epileptic state has been collated (St Louis, 2011; Unterberger et al., 2015).

In the present review, we discuss sleep-related epilepsy with particular emphasis on three of the most frequently implicated epilepsies during the sleep state which include sleep related hypermotor epilepsy (SHE), benign partial epilepsy with centrotemporal spikes (BECTS), and Panayiotopoulos Syndrome (PS).[…] 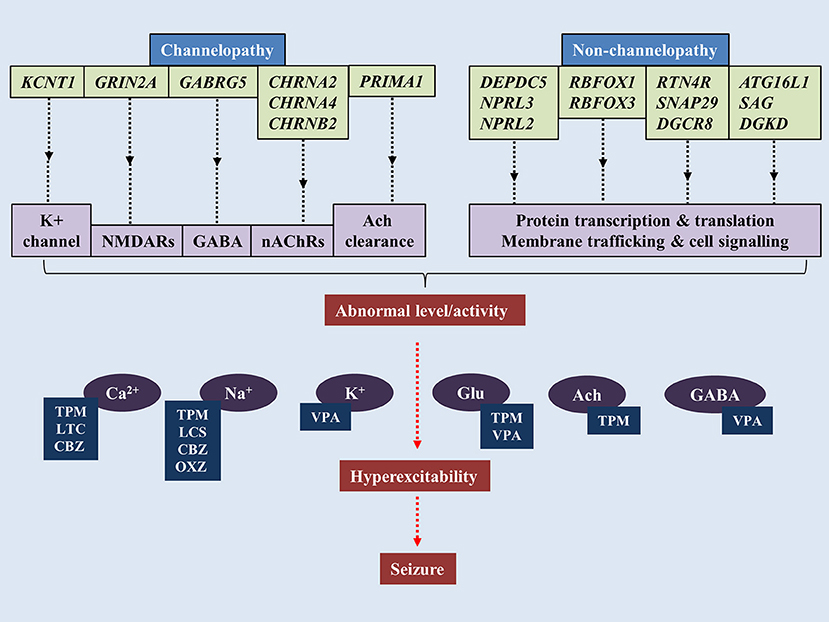