Control of a exoskeleton with different sensors using a microcontroller and Matlab: This project will be used the exoskeleton for wrist rehabilitation and evaluation designed in the RoboticsLab. This device is actuated with SMA (Shape Memory Alloys) wires and it has two DOF. The objectives of the work will be: to integrate position and pressure sensors into the exoskeleton; to use the information of these sensors to control in position and / or strength the exoskeleton in repetitive tasks for the flexion-extension movement of the wrist; collect data on the execution of the task that could be used by the doctor to evaluate the patient’s progression. 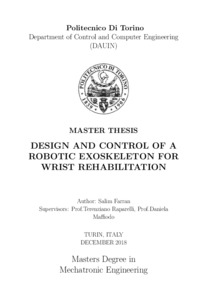 [Abstract] Recovery of functional connectivity of the sensorimotor network after surgery for diffuse low-grade gliomas involving the supplementary motor area.

Posted by Kostas Pantremenos in Neuroplasticity on June 23, 2016

The supplementary motor area (SMA) syndrome is a well-studied lesional model of brain plasticity involving the sensorimotor network. Patients with diffuse low-grade gliomas in the SMA may exhibit this syndrome after resective surgery. They experience a temporary loss of motor function, which completely resolves within 3 months. The authors used functional MRI (fMRI) resting state analysis of the sensorimotor network to investigate large-scale brain plasticity between the immediate postoperative period and 3 months’ follow-up.

Resting state fMRI was performed preoperatively, during the immediate postoperative period, and 3 months postoperatively in 6 patients with diffuse low-grade gliomas who underwent partial surgical excision of the SMA. Correlation analysis within the sensorimotor network was carried out on those 3 time points to study modifications of its functional connectivity.

These results confirm the findings reported in the existing literature on the plasticity of the SMA, showing large-scale modifications of the sensorimotor network, at both inter- and intrahemispheric levels. They suggest that interhemispheric connectivity might be a correlate of SMA syndrome recovery.

Source : Recovery of functional connectivity of the sensorimotor network after surgery for diffuse low-grade gliomas involving the supplementary motor area

Methods: A single blinded randomized control trial was performed to assess the effect of FTST and task-specific walking training with the SMA® device on spatiotemporal gait parameters. Participants (n = 50) were randomly assigned to FTST or SMA. Subjects in both groups received training 3 times per week for 6–8 weeks for a maximum of 18 training sessions. The GAITRite® system was used to collect data on subjects’ spatiotemporal gait characteristics before training (baseline), at mid-training, post-training, and at a 3-month follow-up.

Conclusions: SMA and FTST interventions provided similar, significant improvements in spatiotemporal gait parameters; however, the SMA group showed additional improvements across more parameters at various time points. These results indicate that the SMA® device could be a useful therapeutic tool to improve spatiotemporal parameters and contribute to improved functional mobility in stroke survivors. Further research is needed to determine the feasibility of using this device in a home setting vs a clinic setting, and whether such home use provides continued benefits.