Posted by Kostas Pantremenos in Uncategorized on June 13, 2019

Transcranial focused ultrasound is an emerging technique for non-invasive neurostimulation. Compared to magnetic or electric non-invasive brain stimulation, this technique has a higher spatial resolution and can reach deep structures. In addition, both animal and human studies suggest that, potentially, different sites of the central and peripheral nervous system can be targeted by this technique. Depending on stimulation parameters, transcranial focused ultrasound is able to determine a wide spectrum of effects, ranging from suppression or facilitation of neural activity to tissue ablation. The aim is to review the state of the art of the human transcranial focused ultrasound neuromodulation literature, including the theoretical principles which underlie the explanation of the bioeffects on neural tissues, and showing the stimulation techniques and parameters used and their outcomes in terms of clinical, neurophysiological or neuroimaging results and safety.

Preliminary animal studies suggest that, potentially, different sites in the peripheral nervous system, from nerves (1) to spinal roots (2), and in the central nervous system, from superficial regions like primary motor cortex (3) or frontal eye field (4), to more deep areas like hippocampus (3), amygdala (5), or thalamus (6) can be targeted by focused ultrasound stimulation technique. In addition, animal studies showed that this technique has a high spatial resolution, useful also for mapping small brain areas, as shown by Fry (7) for the mapping of lateral geniculate nucleus, or by Ballantine et al. (2) for the stimulation of Edinger-Westphal nucleus.

Furthermore, a recent fMRI resting-state functional connectivity animal study (8), showed that the effect of tFUS neuromodulation can last for up to 2 h after stimulation, opening a new way to explore not only the online effect but also the long lasting effect of neuromodulation. The first human transcranial application of ultrasounds for neuromodulation was described by Hameroff et al. (9), with an unfocused transcranial ultrasound (tUS) continuous stimulation of posterior frontal cortex, applied on 31 patients affected by chronic pain. The first human application of focused transcranial ultrasound (tFUS) technique was described by Legon et al. (10). They targeted the primary somatosensory cortex of healthy volunteers, in a within-subjects, sham-controlled study. One of the most interesting results of tFUS applications was a case report of emergence from minimally conscious state, after low intensity non-invasive ultrasonic thalamic stimulation in a patient after acute brain injury (11). Following this first single evidence, a clinical trial is ongoing to explore the effect of thalamic low intensity focused ultrasound in acute brain injury patients (12).

In recent years, the scientific community showed a progressive increasing interest on FUS neuromodulation, and some reviews have been published in order to summarize the state of the art on this topic (14–18).

Mechanisms of Actions of US Neuromodulation

The mechanical interaction between US and neuronal membranes can modify the membrane gating kinetics through the action on mechanosensitive voltage-gated ion channels or neurotransmitter receptors (23–25). The study of Tyler et al. (25) supports this hypothesis. Their study showed, on ex vivo mouse brains and hippocampal slice cultures, that low-intensity, low-frequency ultrasound (LILFU) is able to activate voltage-gated sodium and calcium channels. However, this can’t be the only mechanism of action, explaining the action potential induction, since in simulations, considering the role of membrane tension on activation of mechanically sensitive voltage gated channels, the resulting effect was too low to induce an excitation (26, 27).

In addition, the mechanical action of US is able to induce cavitation into the cellular membrane, by means of membrane pore formation, which changes the membrane permeability.

The bilayer sonophore model (28) was introduced to better explain the bioeffects of US, taking into consideration the biomechanical proprieties of US and of cell membranes. According to this model (28), the mechanical energy of US leads to periodic expansions and contractions of the membrane. In this model, the US bioeffect is dependent on the tension applied to the membrane. With a progressive increase in membrane stretch intensity, the bioeffect is mediated by different mechanisms. First by the activation of mechanosensitive proteins. Then, with an increase of intensity, there is a pore formation and with the maximum stretch that can be achieved with the technique a membrane rupture and irreversible lesion is obtained (28) (Figure 1). 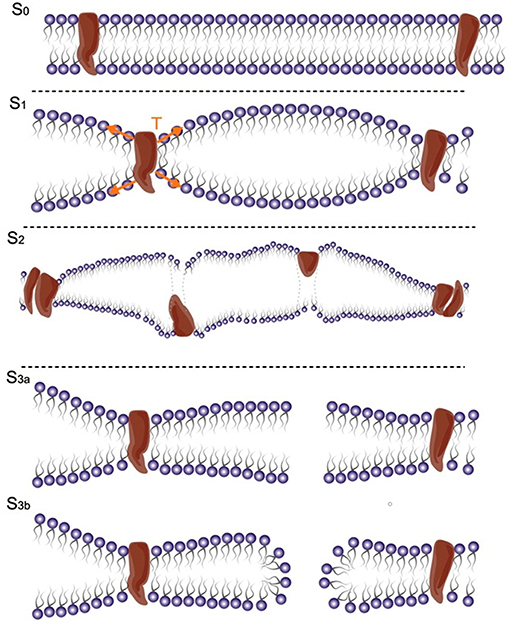