U of A researcher developing personalized program that brings the appeal of electronic gaming to physical therapy for older adults. 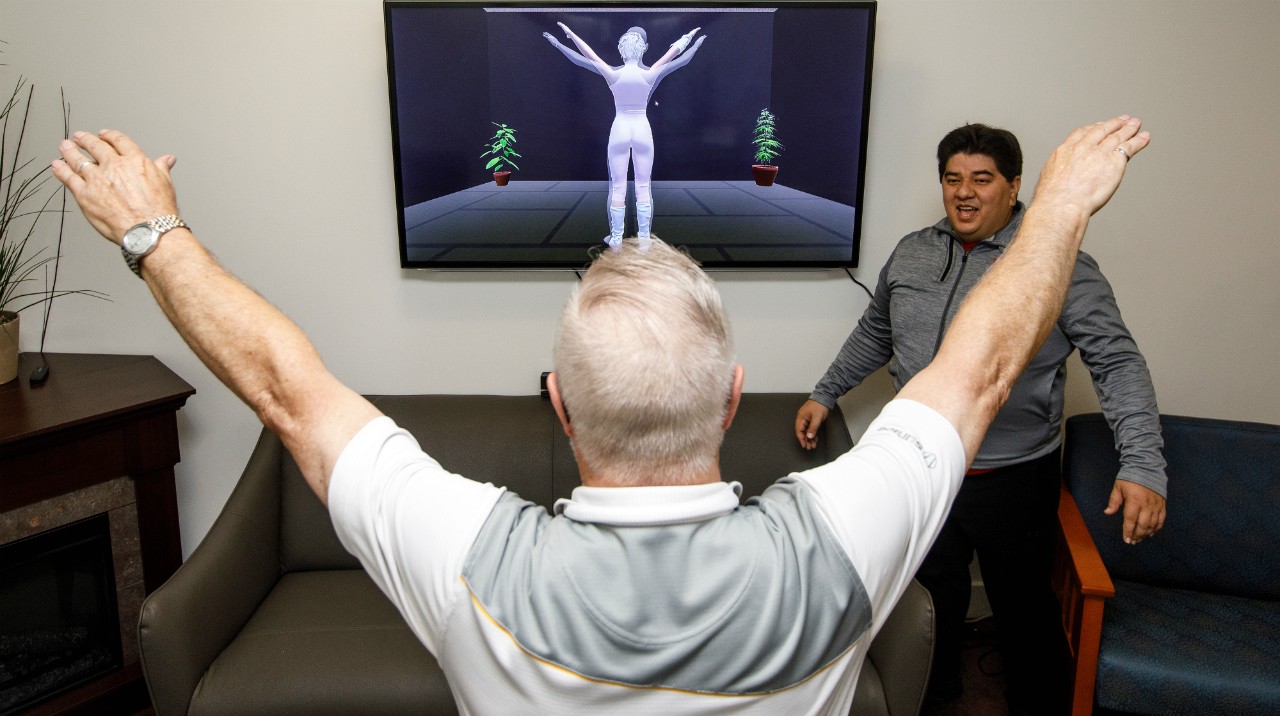 Stuart Embleton performs arm raises with guidance from the VirtualGym program as computing science researcher Victor Fernandez-Cervantes looks on. Feedback from Embleton and other seniors is helping U of A researchers refine the program to deliver customized physical therapy for seniors at home. (Photo: AGE-WELL)

A high-tech University of Alberta research project is letting seniors hit a computerized gym especially designed for their needs.

VirtualGym, an electronic game that combines the entertainment of gaming with prescribed exercises, is being put through its paces in a Calgary seniors’ residence to test its user-friendliness and appeal.

Once perfected, it will deliver at-home therapeutic exercises for seniors with chronic health issues, mobility problems or dementia, at the click of a button.

“It’s a concept of bringing rehabilitation home,” said PhD candidate Noelannah Neubauer, who helped design the program. “We already have telehealth being used by doctors, why not rehabilitation too?”

The joint research project is teaming computing scientist Eleni Stroulia and other researchers from the faculties of science and rehabilitation medicine, with support from AGE-WELL, Canada’s Technology and Aging Network.

Designed to work through Kinect, a motion sensor system originally designed for Xbox video game consoles, VirtualGym works by giving users personalized feedback as they exercise along with an onscreen avatar using a “Simon Says” theme.

“It’s designed so the exercises are completely customizable from a personal trainer or physical therapist and their progress can be monitored,” Neubauer said. By recording users’ movements through VirtualGym, therapists can remotely watch for progressions and adjust exercises accordingly.

Stroulia and her team thought their original version of VirtualGym, developed in 2015, would be a good fit for seniors, but it was a flop with their test group, who found the game too busy.

“They didn’t like it at all,” said Victor Fernandez-Cervantes, a post-doctoral researcher in computing science, who took it back to the drawing board.

Using feedback from Edmonton senior Stuart Embleton and other volunteers from the Cardiac Athletic Society of Edmonton who tried the system, Fernandez-Cervantes made VirtualGym more user-friendly.

“We wanted to design it from their point of view.”

He dialled down the noise with a less distracting and cartoonish version of the game. The screen scenery evolved from its original version—an instructional avatar exercising on snowy ground in front of a brick building—to a soothing blank-walled room with a potted plant at either side. The avatar’s build was also adjusted to reflect a more typical body shape for older adults. As well, he programmed its movements with simple but specific instructions on how to do an exercise properly, complete with correctional tools like arrows and colours that pop up if needed.

Fernandez-Cervantes is continuing to tweak VirtualGym to create a 3-D version. Right now the exercises are only partially viewable, which is a problem for seniors, Embleton believes. “If the program wants you to lift your leg and kick your foot up, you should be able to see that action from a suitable perspective,” he explained.

The eventual plan is to market VirtualGym widely through a spinoff company, Stroulia said.

Embleton, 77, believes seniors would use VirtualGym if it were available to them.

“Most seniors nowadays have computers and TV sets, and that, plus an optical input, is all you need to use the system. It’s going to be more and more useful as it’s further developed. It’s called a game, but it’s really a useful therapeutic process. If I had a broken hip or was frail or couldn’t drive, and needed some physical therapy, I could use a virtual gym at home,” he said.

“We want seniors to be able to exercise more, and this provides another option for them.”

Their work on VirtualGym also offers insight and a set of guidelines for other game designers wanting to develop exercise technology for seniors, said Fernandez-Cervantes.

“When designing products, seniors need to be involved. Soon enough, everyone will be a senior.”

[Abstract] Application of Commercial Games for Home-Based Rehabilitation for People with Hemiparesis: Challenges and Lessons Learned

Objective: To identify the factors that influence the use of an at-home virtual rehabilitation gaming system from the perspective of therapists, engineers, and adults and adolescents with hemiparesis secondary to stroke, brain injury, and cerebral palsy.

Results: Qualitative themes that emerged suggested that system use was associated with three key factors as follows: (1) the technology itself (e.g., characteristics of the games and their clinical implications, system accessibility, and hardware and software design); (2) communication processes (e.g., preferences and effectiveness of methods used during the study); and (3) knowledge and training of participants and therapists on the technology’s use (e.g., familiarity with Facebook, time required to gain competence with the system, and need for clinical observations during remote therapy). Strategies to address these factors are proposed.

Conclusion: Lessons learned from this study can inform future clinical and implementation research using commercial videogames and social media platforms. The capacity to track compensatory movements, clinical considerations in game selection, the provision of kinematic and treatment progress reports to participants, and effective communication and training for therapists and participants may enhance research success, system usability, and adoption.

via Application of Commercial Games for Home-Based Rehabilitation for People with Hemiparesis: Challenges and Lessons Learned | Games for Health Journal

Neurologic music therapy (NMT) has fostered recovery from complications in patients suffering from a wide variety of neurologic diseases. Combining music and virtual reality with standard rehabilitation therapies can improve patient compliance and make therapy more enjoyable. Listening to music can reduce epileptiform discharges and enhances brain plasticity. Music produces variations in brain anatomy between musicians and non-musicians. Music therapy is an inexpensive intervention to help post-stroke patients to recover faster and more efficiently if applied soon after the event. There is evidence that incorporating music into a rehabilitation program fosters recovery of hand function, dexterity, spatial movement, cognitive function, mood, coordination, stride length and memory. Learning words as lyrics, melodic intonation therapy and singing can help the aphasic patient to recover faster. NMT therapists are valuable members of the rehabilitation team. NMT has been approved by the World Rehabilitation Federation as an effective evidence based method of treatment.

Incorporating music into routine rehabilitation programs not only fosters initial recovery but also contributes to improvement and enduring benefit after stopping the treatment. Disabilities stem from different neurologic disorders, work-related injuries and trauma such as motor vehicle accidents and sport injuries. Disabilities can have devastating physical, emotional and financial effects on the lives of patients and their families. It is important to identify and incorporate strategies that supplement traditional rehabilitation therapy in order to optimize the recovery of function and quality of life. NMT, by facilitating the patients’ recovery, contributes to positive patient outcomes. The following reviews the evidence base highlighting the importance of adding music to more standard forms of rehabilitation therapy. It references the neurobiological foundation of NMT, its history and applications. Evidence in support of its use to facilitate recovery from a wide range of complications related to specific neurological diagnoses will be discussed.[…]

Saebo, Inc., is a leading global provider of innovative rehabilitation products for stroke survivors and other neurologically impaired individuals. Headquartered in Charlotte, NC, the company was founded in 2001 by two occupational therapists specializing in stroke rehabilitation. As the leading cause of long-term disability in the U.S., stroke affects over 700,000 Americans every year, leaving many with crippling side affects including the loss of hand function. Saebos pioneering treatment protocols are based on new research documenting the brains remarkable ability to re-program itself following injury.

The companys neurological orthotic devices, including the ground-breaking SaeboFlex and SaeboReach, allow patients with very little residual arm and hand function to immediately begin performing task-oriented, grasp and release activities, thereby forging new pathways in the brain. Named Most Valuable Product in 2008 by Therapy Times, the Saebo Program is now offered as a treatment option at over 2,000clinics and hospitals nationwide, including 22 of the Top 25 Rehabilitation Hospitals as ranked by U.S. News & World Report. The Saebo orthoses are also eligible for reimbursement by Medicare and most commercial insurers. With a network of over 6,000 trained clinicians spanning four continents, Saebo is committed to helping stroke survivors around the globe achieve a new level of independence.