[VIDEO] How to Biology & Anatomy: Optic pathways, visual fields and the lesions – YouTube

via How to Biology & Anatomy: Optic pathways, visual fields and the lesions – YouTube

The purpose of this education is to help you understand how to screen, refer and treat patients related to functional performance.
WE DO NOT DIAGNOSE!

Strategies for adapting a computer for use by people with visual field deficits.

Patients with peripheral field loss complain of colliding with other pedestrians in open-space environments such as shopping malls. Field expansion devices (e.g., prisms) can create artificial peripheral islands of vision. We investigated the visual angle at which these islands can be most effective for avoiding pedestrian collisions, by modeling the collision risk density as a function of bearing angle of pedestrians relative to the patient. Pedestrians at all possible locations were assumed to be moving in all directions with equal probability within a reasonable range of walking speeds. The risk density was found to be highly anisotropic. It peaked at ’458 eccentricity. Increasing pedestrian speed range shifted the risk to higher eccentricities. The risk density is independent of time to collision. The model results were compared to the binocular residual peripheral island locations of 42 patients with forms of retinitis pigmentosa. The natural residual island prevalence also peaked nasally at about 458 but temporally at about 758. This asymmetry resulted in a complementary coverage of the binocular field of view. Natural residual binocular island eccentricities seem well matched to the collision-risk density function, optimizing detection of other walking pedestrians (nasally) and of faster hazards (temporally). Field expansion prism devices will be most effective if they can create artificial peripheral islands at about 458 eccentricities. The collision risk and residual island findings raise interesting questions about normal visual development.

A series of novel optical designs may address some limitations of existing prism technology, which can expand visual fields by up to 30 degrees.

Researchers from the Schepens Eye Research Institute of Massachusetts Eye and Ear and Harvard Medical School have designed three new eyeglasses using high-power prisms to optimally expand the visual fields of patients with hemianopia, a condition in which the visual fields of both eyes are cut by half. The new designs, described inOptometry and Vision Science, address some limitations of existing prism correction available to this population. 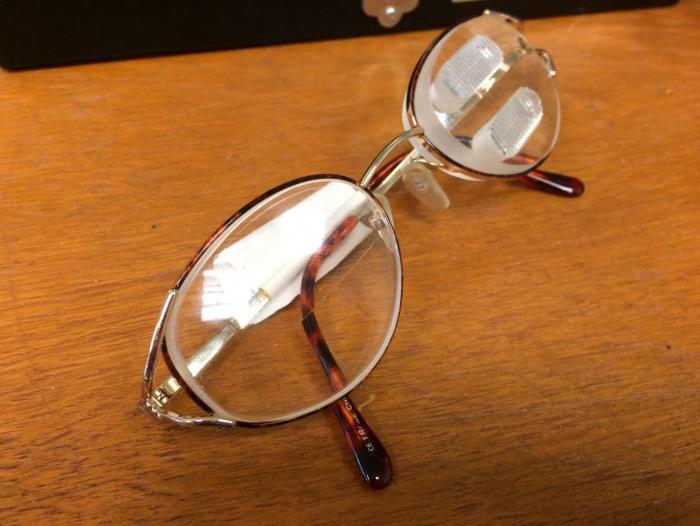 By embedding the current prism in a spectacle lens that has prismatic power in the opposite direction, the image shifting effect is increased by the summation of the power of both prism types. This design allows for up to 36 degrees of expansion to the visual field on the patient’s blind side. This design permits 5 degrees of scanning range to the blind side with full effect. Credit: Massachusetts Eye and Ear

Impairing either the left or right halves of the visual fields in both eyes, hemianopia affects more than one million Americans and is most commonly caused bystroke, brain tumors and head trauma. Hemianopia reduces the natural visual field of about 180 degrees to a mere 90 degrees. People with hemianopia have difficulty detecting hazards on their blind sides, leading to collisions, falls and other accidents. Patients with hemianopia cannot legally drive in Massachusetts, where a visual field of 120 degrees is required.

With the goal of expanding the visual field on the blind side even farther, the researchers explored new optical techniques to create higher power image shifting devices designed to bend the light farther than the 30-degree limit of conventional prisms. In conventional prisms, increasing the angle eventually results in the light bending back into the prism, trapped by what is called “total internal reflection.”

“It’s not just that we need a device with a higher angle of light shifting to let them see farther,” said Dr. Peli (pictured right). “We also want the new devices to provide the additional range of vision when the patient scans their eyes in both directions. The current prism devices support such flexibility only when scanning into the seeing side.”

Yoked Prisms in the Carrier Lens

By embedding the current prism in a spectacle lens that has prismatic power in the opposite direction, the image shifting effect is increased by the summation of the power of both prism types. This design allows for up to 36 degrees of expansion to the visual field on the patient’s blind side. This design permits 5 degrees of scanning range to the blind side with full effect. … 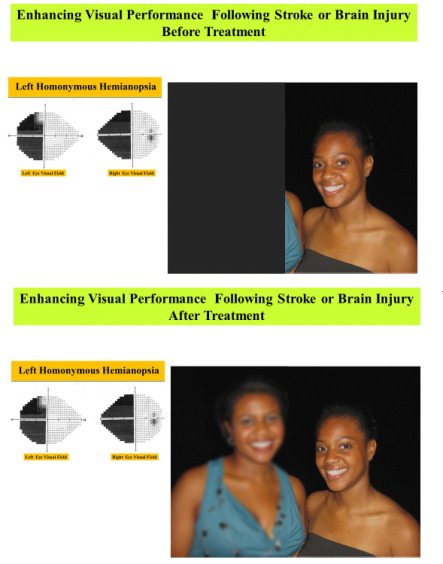 Patients with occipital lobe damage may have blind areas in their visual field.

Other non-cortical areas of the brain still process visual information.

Augmented virtual reality goggles as a therapy for cortical blindness is proposed.

Homonymous hemianopsia is a type of cortical blindness in which vision is lost completely or partially in the left half or the right half of the field of vision. It is prevalent in approximately 12% of traumatic brain injury and 35% of strokes. Patients often experience difficulty with activities such as ambulating, eating, reading, and driving. Due to the high prevalence of homonymous hemianopsia and its associated difficulties, it is imperative to find methods for visual rehabilitation in this condition. Traditional methods such as prism glasses can cause visual confusion and result in patient noncompliance. There is a large unmet medical need for improving this condition. In this article, we propose that modifying visual stimuli to activate non-cortical areas of visual processing, such as lateral geniculate nucleus and superior colliculus, may result in increased visual awareness. Presenting high contrast and low spatial frequency visual stimuli can increase visual detection in patients with cortical blindness, a phenomenon known as blindsight. Augmented virtual reality goggles have the potential to alter real-time visual input to high contrast and low spatial frequency images, possibly improving visual detection in the blind hemifield and providing an alternative therapy for homonymous hemianopsia.

Cortical visual impairment comprises a significant component of strokes and traumatic brain injury. Cortical visual impairment includes homonymous hemianopsia, in which vision is lost completely or partially in the left half or the right half of the field of vision. Homonymous hemianopsia is prevalent in approximately 12% of traumatic brain injury and 35% of strokes [1], [2] and [3]. Individuals with this vision loss usually have difficulties with activities of daily living such as ambulating, eating, reading, and driving [4] and [5]. Due to the high prevalence of homonymous hemianopsia and its associated difficulties, it is imperative to find methods for visual rehabilitation in this condition. Traditional methods of visual rehabilitation for homonymous hemianopsia include fitting spectacles with prisms to shift the visual field from the blind hemifield to the intact visual field. This is accomplished by placing the base of the prism in the blind hemifield, which shifts the image toward the apex of the prism into the intact hemifield. Many patients discontinue treatment with prisms because the prisms may induce visual confusion and double vision[1], [2], [3] and [4]. Another technique used is to train individuals with hemianopsia to make quick eye movements in the direction of the blind hemifield, though there is not much evidence supporting efficacy [6]. Although these methods may provide some compensation for the visual field loss, they do not restore the impaired visual field. Accordingly, other methods of improving vision are needed.

Individuals with homonymous hemianopsia do not consciously see vision in the blind hemifield. However, there is evidence of a ‘blindsight’ phenomenon, whereby some affected individuals can detect objects in their blind visual field, albeit without conscious awareness of being able to see the object. Functional magnetic resonance imaging (fMRI) studies have indicated that visual processing occurs in other parts of the brain, such as the lateral geniculate nucleus (LGN) and superior colliculus (SC) (Fig. 1). Visual processing in these regions provides the neural network that enables patients with blindsight to see [7], [8], [9], [10] and [11]. Blindsight has been manipulated in some individuals to enhance visual awareness. Weiskrantz et. al studied a patient with homonymous hemianopsia and well-documented blindsight over a long period of time [7]. The patient reported increased awareness of visual stimuli in his blind visual field when the stimulus was presented with high contrast and low spatial frequency. Spatial frequency refers to the level of detail in an image appearing within a degree of the visual field. Temporal frequency, the number of times a stimulus is flashed within a second, also modulates detection. Multiple studies have shown that within a temporal frequency range of 5-20 Hz (cycles/second), detection of visual stimuli in a forced-choice test is significantly better than chance [7], [8], [9], [10] and [11]. The time of stimulus onset also affects the rate of detection. Patients with parietal lobe injury often cannot detect a visual stimulus in the neglected hemifield when it is presented simultaneously in the intact hemifield, but can detect the stimulus when it is presented by itself in the neglected hemifield only, a phenomenon known as visual extinction [12] and [13]. It is thought that visual extinction reflects an attentional deficit as opposed to primarily a sensory deficit, although this remains an area of active research [14]. Despite that visual extinction is primarily studied in patients with hemi-neglect, patients with hemianopsia also can have hemi-neglect from injury to both the occipital and parietal lobes [15]. Therefore, the relevant visual variables for increasing visual detection in hemianopsia are stimuli contrast, spatial frequency, temporal frequency and stimulus onset asynchrony.

Objectives The aim was to quantify oculomotor performance in hemianopic patients and in healthy controls during saccadic and fixation tasks, and to detect potential spontaneous adaptive mechanisms in the patients.

Conclusions Number of DS was not correlated with disease duration indicating insufficient spontaneous long-term adaptation. Increased number of DS and decreased FS after landing in patients with small or absent macular sparing stresses the importance of intact parafoveal vision. Asymmetric FEM during continuous fixation indicate an advantageous adaptive mechanism to shift the visual field border towards the hemianopic side.

…A novel, tablet-based application (app) has been developed to act as a screening tool for visual impairment in stroke survivors; The Stroke Vision app. The app includes assessments for visual acuity, visual fields and visuospatial neglect, as well as novel tools for the education of patients, carers and staff. The app has been devised by experts in the field to address two important deficiencies; firstly a set of visual assessment tools to support and improve evaluation and rehabilitation of visual impairments in stroke survivors, and secondly to provide education for staff and information to carers about their relatives visual disabilities…