Since the early 2000s, researchers have been trying to develop lower-limb exoskeletons that augment human mobility by reducing the metabolic cost of walking and running versus without a device. In 2013, researchers finally broke this ‘metabolic cost barrier’. We analyzed the literature through December 2019, and identified 23 studies that demonstrate exoskeleton designs that improved human walking and running economy beyond capable without a device. Here, we reviewed these studies and highlighted key innovations and techniques that enabled these devices to surpass the metabolic cost barrier and steadily improve user walking and running economy from 2013 to nearly 2020. These studies include, physiologically-informed targeting of lower-limb joints; use of off-board actuators to rapidly prototype exoskeleton controllers; mechatronic designs of both active and passive systems; and a renewed focus on human-exoskeleton interface design. Lastly, we highlight emerging trends that we anticipate will further augment wearable-device performance and pose the next grand challenges facing exoskeleton technology for augmenting human mobility.

The day that people move about their communities with the assistance of wearable exoskeletons is fast approaching. A decade ago, Ferris predicted that this day would happen by 2024 [1] and Herr foresaw a future where people using exoskeletons to move on natural terrain would be more common than them driving automobiles on concrete roads [2]. Impressively, Ferris and Herr put forth these visions prior to the field achieving the sought-after goal of developing an exoskeleton that breaks the ‘metabolic cost barrier’. That is, a wearable assistive device that alters user limb-joint dynamics, often with the intention of reducing user metabolic cost during natural level-ground walking and running compared to not using a device. When the goal is to reduce effort, metabolic cost is the gold-standard for assessing lower-limb exoskeleton performance since it is an easily attainable, objective measure of effort, and relates closely to overall performance within a given gait mode [3, 4]. For example, reducing ‘exoskeleton’ mass improves user running economy, and in turn running performance [4]. Further, enhanced walking performance is often related to improved walking economy [3] and quality of life [5, 6]. To augment human walking and running performance, researchers seriously began attempting to break the metabolic cost barrier using exoskeletons in the first decade of this century, shortly after the launch of DARPA’s Exoskeletons for Human Performance Augmentation program [7,8,9,10].

It was not until 2013 that an exoskeleton broke the metabolic cost barrier [11]. In that year, Malcolm and colleagues [11] were the first to break the barrier when they developed a tethered active ankle exoskeleton that reduced their participants’ metabolic cost during walking (improved walking economy) by 6% (Fig. 1). In the following 2 years, both autonomous active [12] and passive [13] ankle exoskeletons emerged that also improved human walking economy (Fig. 1). Shortly after those milestones, Lee and colleagues [14] broke running’s metabolic cost barrier using a tethered active hip exoskeleton that improved participants’ running economy by 5% (Fig. 1). Since then, researchers have also developed autonomous active [15, 16] and passive [17, 18] exoskeletons that improve human running economy (Fig. 1). 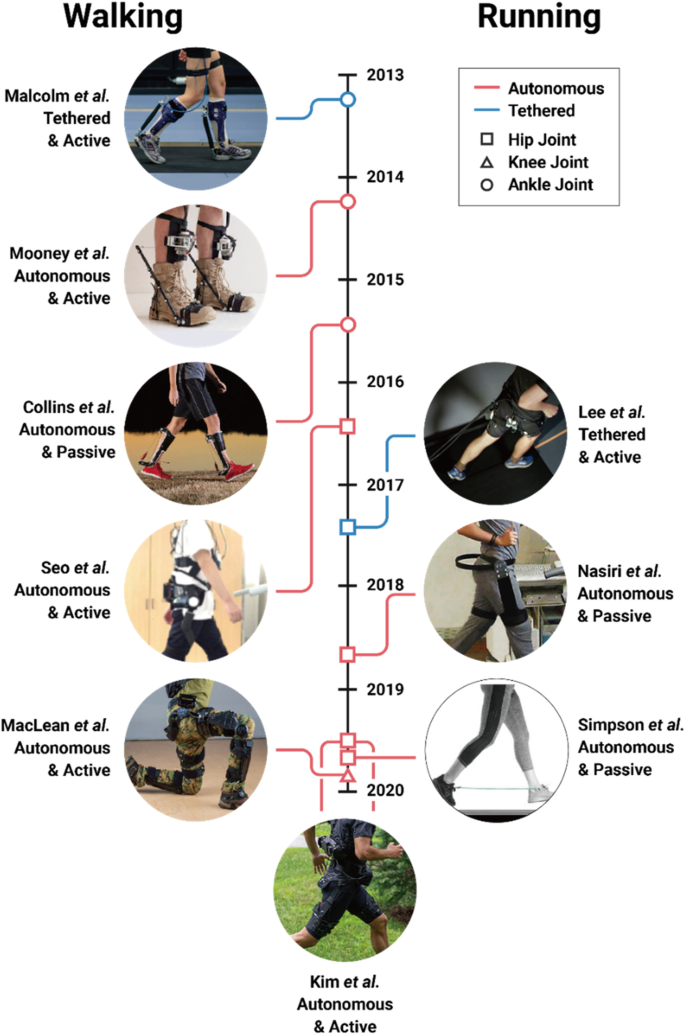 Virtual therapy is based on research that combines leading-edge data techniques with wearable robotics, artificial intelligence and machine learning. 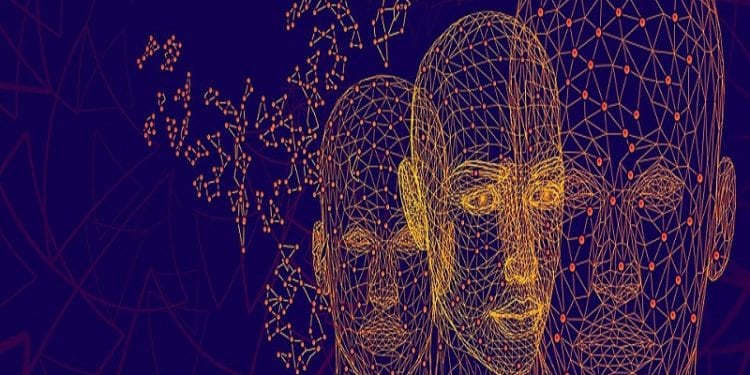 An engineering researcher from New Zealand’s University of Auckland has been awarded a Rutherford Discovery Fellowship.

The Associate Professor, who is developing a virtual therapy technology for personal rehabilitation, is one of eleven Fellows for 2019. The Fellowship provides NZ$ 800,000 in funding over five years.

The aim is to create devices that are capable of personalising rehabilitation and recovery plans, which are cheaper and more efficient than humans.

The Problem for Personal Rehabilitation

The Solution for Personal Rehabilitation

In other news, the University was the site of a unique digital treasure hunt recently to mark Stress Less Week.

Stress Less week was held 7 to 11 October as thousands of students prepare to head into study break and exam period.

A student start-up developed the technology used in the app-based game, which challenged the students to unlock and solve riddles on the City Campus to find secret locations and discover rewards.

The start-up’s Founder explained that fun is the ultimate antidote to stress.

They provided an experience that facilitated getting out and connecting with peers, before it gets too close to exams and after the mid-semester wave of assignments.

They are passionate about using new technologies to turn cities into playgrounds, developing a portfolio of technologies in the process.

These technologies include holograms, face-recognition software and transparent glass screens, which they draw on to design interactive games.

Using the campus for a big treasure hunt is a great way to test the waters before thousands of dollars are put into more commercial ventures, and scale-up the app to use in different situations.

via Personal Rehab and Recovery Through Virtual Therapy

Posted by Kostas Pantremenos in Rehabilitation robotics on July 23, 2018

This research presents a novel hand exoskeleton rehabilitation device to facilitate tendon therapy exercises. The exoskeleton is designed to assist fingers flexion and extension motions in a natural manner. The proposed multi-Degree Of Freedom (DOF) system consists of a direct-driven, optimized and underactuated serial linkage mechanism having capability to exert extremely high force levels perpendicularly on the finger phalanges. Kinematic and dynamic models of the proposed device have been derived. The device design is based on the results of multi-objective optimization algorithm and series of experiments conducted to study capabilities of the human hand. To permit a user-friendly interaction with the device, the control is based on minimum jerk trajectory generation. Using this control system, the transient response and steady state behavior of the proposed device are analyzed after designing and fabricating a two-fingered prototype. The pilot study shows that the proposed rehabilitation system is capable of flexing and extending the fingers with accurate trajectories.

Posted by Kostas Pantremenos in Rehabilitation robotics on December 3, 2016

In this paper, we present an electromyographic (EMG) control interface for a supernumerary robotic finger. This novel wearable robot can be used to compensate the missing grasping abilities in chronic stroke patients or to augment human healthy hand so to enhance its grasping capabilities and workspace. The proposed EMG interface controls the motion of the robotic extra finger and its joint compliance. In particular, we use a commercial EMG armband for gesture recognition to be associated with the motion control of the robotic device and surface one channel EMG electrodes interface to regulate the compliance of the robotic device. We also present an updated version of a robotic extra finger where the adduction/abduction motion is realized through ball bearing and spur gears mechanism. We validated the proposed interface with two sets of experiments related to compensation and augmentation. In the first set of experiments, different bi-manual tasks have been performed with the help of the robotic device and simulating a paretic hand. In the second set, the robotic extra finger is used to enlarge the workspace and manipulation capability of healthy hands. In both the sets, the same EMG control interface has been used. The obtained results demonstrate that the proposed control interface is intuitive and can successfully be used for both compensation and augmentation purposes. The proposed approach can be exploited also for the control of different wearable devices that has to actively cooperate with the human limbs. 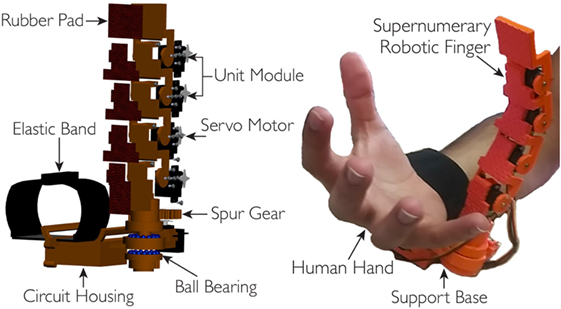 Figure 1. On left, the exploded cad view, whereas on right, the prototype of the robotic extra finger. Four modules are used for the flexion/extension motion, while the revolute joint based on bearings and spur gears mechanism at the finger base is used for the adduction/abduction motion. The device can be worn on the forearm through an elastic band.

Posted by Kostas Pantremenos in Rehabilitation robotics on June 9, 2015

Inspired by exoskeleton animals, a new form of robotics—wearable robots—have recently been introduced and attracted much attention with applications that range from enabling patients with paraplegia to walk to introducing superhuman capabilities. There are mainly two types of wearable robots: exoskeletons and soft exosuits, where the primary difference is the material used for the structure of the robot. In general, wearable robots are designed for enhancing the user’s physical performance, such as strength, or to restore locomotion. This article reviews the field of wearable robotics, its development, applications, and current research trends.