In the final of a series of blog articles, we are going to look at the factors that impact the effectiveness of FES. This one covers pulse width and charge & torque.

The available pulse widths in FES devices vary, most commonly between 150 and 300us, however much wider variations (50us to 2500us) in pulse width can have differing effects upon the target muscle tissue.

Practically, a longer pulse width causes the stimulus to remain in the tissues for longer, depolarising a greater number of nerve fibres, indiscriminate of motor, sensory or pain. Higher pulse widths have been shown to generate greater levels of torque and can often allow tetanic muscle contractions resulting in physiological joint movement at lower levels of amplitude, which can be useful when attempting to maximise torque in those with intact sensation.

However, when looking for a specific muscle contraction, for example a bicep’s, if too great a pulse width is applied it is common to see overflow into surrounding or opposing muscle groups. Compared to pulse frequency and current amplitude, the role of pulse duration is less appreciated in its possible influence on maximising torque output.

Moreover, a pulse duration of 450 microseconds has been shown to be effective in conducting electrically induced resistance training in individuals with spinal cord injury (Kendell et al., 2006, Burnham et al., 1997, cited by Dolbow and Gorgey, 2016).

However, despite this evidence, most researchers have used pulse durations of 300 microseconds or below in their studies, which could potentially limit the outcome of Neuromuscular Electric Stimulation (NMES) protocols in maximising elicited torque output. The controversy regarding pulse duration selection reflects the limited amount of knowledge regarding the optimal pulse duration required to maximise torque output. 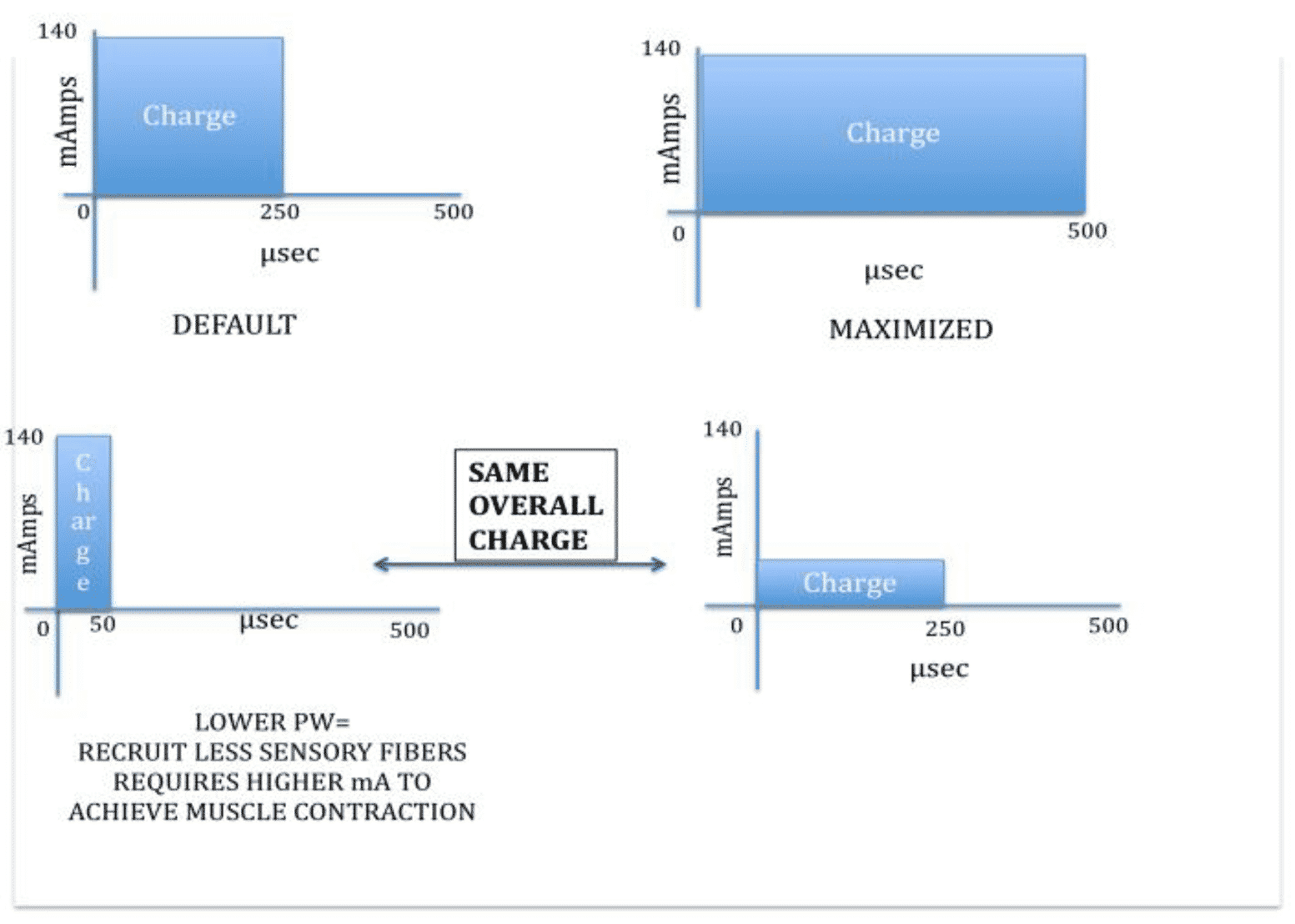 However, as stated above, patient tolerance is the determinant of how much charge may be applied. Manipulating both amplitude and pulse width can help to generate sufficient charge to result in a forceful muscle contraction, without becoming unbearable for the patient.

This article is taken from our white paper “The integration of Functional Electrical Stimulation (FES) technology and neurorehabilitation”.

This entry was posted on August 12, 2018, 02:19 and is filed under Functional Electrical Stimulation (FES). You can follow any responses to this entry through RSS 2.0. You can leave a response, or trackback from your own site.